Art for Your Sake

New-age universities are focusing on liberal arts to impart a broader education to their students.
Arunima Mishra | Print Edition: Oct 26, 2014 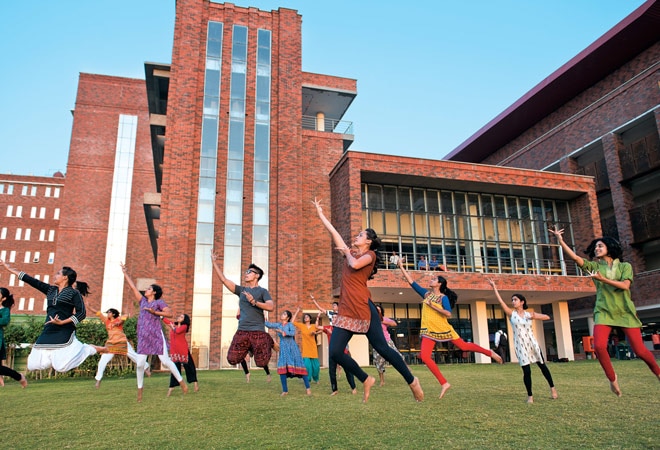 In step with the times: Ashoka University students at a dance class. Photo: Vivan Mehra/www.indiatodayimages.com.

The idea of what constitutes a well-rounded education has been an ever-evolving one. Until recently, and to an extent even today, any education with science, technology, engineering and math as subjects have been seen as career-ready degrees.

But of late, as the industry realised the importance of creativity and imagination, communication skills and problem-solving abilities, they have started looking towards liberal arts - subjects that help individuals take part in an active civic life. This, in turn, has led to a rejig in the basic structure of courses offered by educators in India.

Liberal arts have been central to an all-round education ever since the days of Greeks and Romans. It has been so in modern times too but was not very apparent. A close look at the credentials of Peter Thiel, Co-founder of PayPal; Michael Eisner, former CEO of Walt Disney; and Gurucharan Das, former CEO of Procter & Gamble India, will point to a common strand - their liberal arts background. While both Thiel and Das majored in philosophy for their graduation, Eisner has a degree in English literature and theatre.

So what does all this mean for education in India, especially at the undergraduate level?  For students, the degree-level courses are becoming flexible with focus on the individual student's passion. And for industry it means more suitable candidates with wider perspectives. Honing their skills: Students of BML Munjal University during a session on liberal arts. Photo: Shekhar Ghosh.
Take, for instance, the five-year Integrated Programme in Management offered by the Indian Institute of Management (IIM), Indore since 2011. Students who join after their Class XII cover subjects such as math, statistics, economics, philosophy, Shakespearean literature, computer languages, and performing arts in the first three years. In the remaining two years, they study MBA subjects. "This was a perfect course for me. I'll get an overall idea of finance, HR, marketing and strategic management," says Devanshi Laddha, who is from the first batch of the course. "And in the 30 sessions of theatre, I learned how to think out of the box. We were asked to perform again and again if we were found to be repetitive in our performance."

Rishikesha T Krishnan, Director of IIM-I, says the course stands out because in a typical MBA programme 80 to 90 per cent of students come from an engineering background.

"For this course, we wanted to catch them young and expose them to various perspectives by bringing in diversity in the subjects taught. We can create leaders, not just managers. The course gives a chance to shape their thinking in a wide range of subjects," he says.

Private and corporate-backed universities have also restructured their courses. In 2013, OP Jindal Global University started its five-year integrated BBA and MBA course. According to Ravi Agarwal, Professor and Vice-Dean (academic affairs), philosophy, psychology, history and politics, among others, are the core courses for undergraduate (UG) students. "We encourage students of any discipline to take one cross-listed course from another discipline to widen their perspective," he says.

From this year Ashoka University is offering UG courses that allows students to opt for major and minor subjects. At Shiv Nadar University (SNU), started by HCL Chairman Shiv Nadar, UG engineering students are offered a course (minor) in management. At BML Munjal University, while the MBA students have to learn courses such as moral dilemma, world civilisation, communication, negotiation and conflict resolution, the engineering students have to opt for liberal arts as minors. 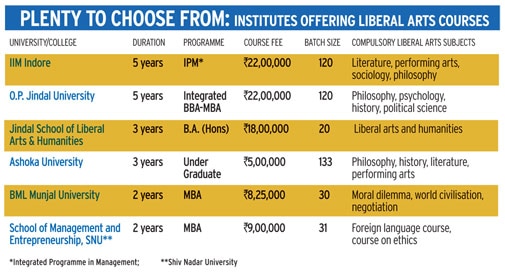 These institutions are catering not just to an industry looking for fresh talent but also to students who want to venture into new areas of study. A case in point is the Young India Fellowship (YIF) offered by Ashoka University. It is a multidisciplinary postgraduate programme in liberal studies and leadership that was started five years ago, and is touted to be an alternative to an MBA degree. The number of applicants for this programme over the years has increased four times to 200. "I feel this liberty is needed for one to build ones personality and prepare oneself for all one sets out to do," says Karthik Purushothaman, a YIF fellow who chose the programme even after getting selected for an MBA course at IIM Ahmedabad and Bangalore. "In case of an academic decision, it is important for the programme not to be prescriptive but allow the student to use the many resources and opportunities it offers. It needs variety, it needs to be of a certain calibre and it needs to be committed to developing the student as an individual rather than building a machine."

The YIF fellows have been hired by McKinsey, Genpact, Cipla, Boston Consulting Group, Microsoft, Toshiba and the Prime Minister's Office. "A number of recruiters come to us every year. The job market today demands the ability to work across the disciplines," says Vineet Gupta, Founder and Trustee, Ashoka University.

The university, in its effort to stand out, has tried to stay away from building yet another B-school. It has so far received more than 3,000 applications from students who have turned down offers from elite global universities such as Carnegie Mellon, Yale-NUS (Singapore) and Amherst. This year, in the three-year BA/BSc Honours course, of the 133 students, about 20 of them are students who left institutions like Lady Shri Ram (LSR) College, Delhi; St Xavier's College, Mumbai and St Stephen's, Delhi; University of California, San Diego, and Carnegie Mellon. "I chose Ashoka University because I didn't want to confine myself to a restricted curriculum. I want the freedom to choose what I want to study," says Gauri Saxena, who left LSR after spending a month. At the university, a student can study mathematics and music, philosophy and photography, dance and literature, and so on.

Pramath Raj Sinha, a founding member of the university, says studies in liberal arts will help students cope well with ambiguity and dilemma and will equip them with a multi-dimensional approach. HR experts agree. "BTech graduates have a specific knowledge level. They excel in certain areas and struggle in some. A liberal arts credit takes care of this. Candidates with liberal arts credits plus MBA will make for better man-managers than those with a BTech and an MBA," says Amit Khurana, Chairman and CEO of Corporate Access, an executive search firm.

Meanwhile, SNU has made liberal arts mandatory for all its courses. The university has recently launched its two-year MBA programme. Shekhar Chaudhuri, former director of IIM-C and the director of SNU's School of Management and Entrepreneurship, says the school aims to create leaders who are ethical, caring and innovative. The batch size will be doubled next year from 31, he says. In the first term, the programme offers courses in design thinking and innovation.

As part of this, Srikant M. Datar, Arthur Lowes Dickinson Professor of Accounting at Harvard Business School and a Senior Advisor at SNU, has designed an activity-based course to understand the consumer's mind and design products and services. A course on starting and managing a new venture is a must in the third term. "We will create industry-ready professionals who are entrepreneurial and ethical in their orientation. They will surely make a difference," says Chaudhuri.

Besides, there are a couple of other courses that are compulsory at these corporate-sponsored new B-schools. To equip students with a cultural understanding, a foreign language course, too, is compulsory at SNU. "Students will get seamlessly integrated in multinational companies outside India. We are working on the languages in demand like Spanish, French, German, Chinese, Japanese, in the first term of the second year," says Chaudhuri.

Another area of focus for these corporate-run institutions is a course on ethics. According to Anil Sachdev, Director of the School of Inspired Leadership, a B-school co-created by a group of companies in 2008, whatever is critical for the industry finds its way through B-schools. "A financial crisis to a large extent happens due to poor governance. That's when the education of the leaders who have studied in B-schools is questioned. Just like London Business School using Shakespearean tragedy, Macbeth, to decode deception and lies and Harvard using theatre, we use simulation through theatres to focus on ethical dilemma," he says. 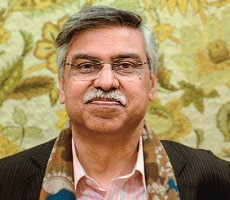 'Management students will be exposed to technology and liberal arts, while engineering students will study liberal arts subjects too,' says Sunil Kant Munjal, Joint Managing Director, Hero MotoCorp.
Most of these institutions have tied up with various global educational colleges to curate a course design that is unique for the Indian students. Akshay Munjal, Executive Director, BML Educorp Services, says his team spent two years looking at different global B-schools to understand their positives and negatives before designing BML Munjal University's MBA programme. "Giving the students in India a broader perspective was important. Like the course on world civilisation. A perspective on civilisation and how it has developed gives a clear picture that the world is bigger than one's own eco-system," says Munjal.

At the Indian Management Conclave 2014, his father, Sunil Kant Munjal, Joint Managing Director of Hero MotoCorp, had talked about how the university has 36 per cent experiential learning content. "The management students will be exposed to technology and liberal arts, while engineering students will study liberal arts subjects too," he said.

How BT picked Best B-schools for 2014