"The idea is that customers should make the payment in a shorter time than it takes to remove money from the wallet," says Citrus Chairman Satyen Kothari, who founded the company along with Jitendra Gupta in April 2011 and brought in the initial funding o 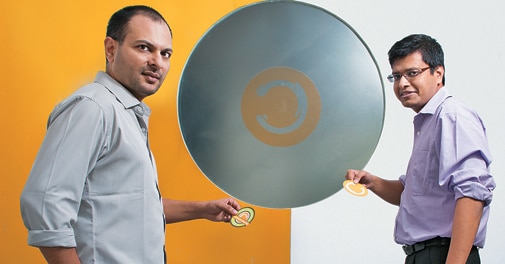 The next time you use a Meru Cab, you will not have to pull out your wallet to pay the driver. All you will need is a mobile phone and a Citrus Payment Solutions app that will allow you to transfer money - from one rupee to Rs 10,000 - to the radio-taxi operator and save the hassle of paying cash. "The idea is that customers should make the payment in a shorter time than it takes to remove money from the wallet," says Citrus Chairman Satyen Kothari.

The seeds for Citrus were sown in December 2010 when Kothari met with Jitendra Gupta, a former ICICI Bank executive, at Taj Mahal Hotel in Mumbai over a cup of coffee. The duo founded the company four months later, in April 2011. Kothari, who had a background of running and selling start-ups, brought in the initial funding of Rs 16 lakh. "The reason why we came together is because we both understood the problems in the online payment gateway and we wanted to address the problem as we knew the potential of growth," says Kothari. Adds Gupta, CEO of Citrus: "It is all about from a chalta hai attitude to wow. There was nothing wrong with a Nokia phone, but people shifted to an apple and a Samsung phone. It's all about that wow feeling."

Funding was never a problem for Citrus. In January 2012, venture capital fund Sequoia Capital invested close to $1.8 million in the company. It subsequently pumped in more money, taking its total investment to $3.4 million. Says Mohit Bhatnagar, Managing Director at Sequoia Capital, "The reason why we invested in Citrus is that there is a big opportunity to create a trusted payment consumer brand in India. Second, online payment in India is still not consumer friendly. There is a lot of pain. Citrus is built in India for India."

Sequoia Capital invested in Citrus also because the start-up is similar to a large extent to US-based PayPal, a payment services company, in which the fund made huge returns on exit. Citrus has since attracted more investors. Last November, Japanese online payment company Econtext Asia and Beenos Asia, a subsidiary of Netprice, a Japanese e-commerce company, invested close to $4.4 million in Citrus.

What makes Citrus cool? Its closest rival Billdesk, in 14 years of existence, still remains a net payment processing company whereas Citrus has diversified from payment processing to a range of other services such as analytics that help merchants to get an idea about the industry trends and offering a virtual card service like Visa and MasterCard as well as a wallet.

Citrus Wallet is the way forward for the company and the differentiator among its peers. Apart from storing your money, Citrus Wallet stores your credit and debit card information, bank details as well as personal details. This means that whenever you want to do an online transaction, you don't need to go through the hassle of feeding personal information. Once you have stored the details on the Citrus platform it automatically feeds the information on to the merchant's site from where the customer is doing an online transaction. "Payment gateway solutions have become more of a commodity. Citrus Wallet, which offers combined services, is the way forward," says Gupta.

Currently, Citrus is losing money due to its fast expansion. For any start-up, marketing and business development costs are always high. The company's net burn rate is 40 per cent -- a comfortable level for start-ups -- which means that Citrus has a negative cash flow. In other words, it is spending more than what it is earning from operations. Citrus has tied up with nearly 1,500 merchants and is adding 150 merchants every month. The company has grown at 28-30 per cent in the last five quarters and has doubled its revenues. At the end of March 2014, Citrus will post quarterly revenue of Rs 3 crore.

Citrus earns around two to 2.5 per cent from merchants as fee on every transaction, but most of it goes to Visa and MasterCard as it is only a facilitator. Going ahead, the big thing for Citrus will be its bank - Citrus Bank. Launched in early March, the consumer can sign up at citruspay.com for an account or download the Citrus app from the Google Play Store and load an amount of their choice via a credit card, debit card, or directly from bank. This app will enable the user to transfer money to friends, colleagues and family members in just a few seconds. Apart from sending money, one can also request money. "The focus will be to consolidate the bank and grow it before launching any other products," says Kothari, who is betting big on the growth of smartphones in India. The number of smartphone users in India is estimated to grow from 70 million to 200 million in the next couple of years. So, the next time you want to book a movie ticket online, you will be two clicks away with a Citrus app on your phone.