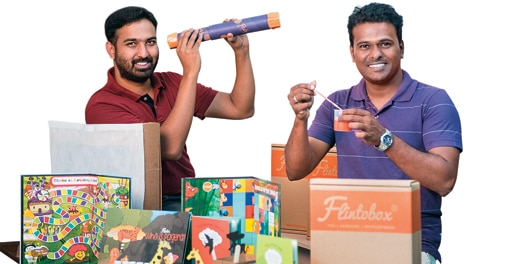 If procreation is nature's most powerful force, Flintobox is on to a great idea. Its target market is children between three and seven years, its product is what it calls "development toys", and its business model is a subscription service. Let's rephrase that: it targets the harried parent struggling to keep a kid engaged. And, makes a neat dime doing so.

Flintobox, a year-old Chennai start-up, sells toys conceptualised by educators, prototyped by designers, and manufactured by top-of-the-line printers. The toys, shipped in a box to customers every month, have "something to create, something to read, something to play, something to explore, with a bonus fun activity thrown in," says Co-founder Arunprasad Durairaj, 32. A box comes for Rs 1,095 each and subscriptions run from Rs 2,985 to Rs 9,540 for three to 12 months.

The boxes have toys themed around topics like wildlife, vegetables, colouring, outer space, numbers and others, all aimed at 12 development needs in children. The theme is different each month. "The foundation of a child's learning is laid before eight years. After that, it is like plastering and painting a building," says Durairaj, who in past avatars has worked for Tata Consultancy Services in product management and in an M&A role at Samsung, besides a venture fund in Boston after an MBA at Dartmouth.

The idea of Flintobox -- the name comes from the company's mascot, an orange octopus with eight legs (yes, it stands) -- came from Co-founder Vijaybabu Gandhi's efforts in keeping his son Aadhav's curiosity piqued. "I used to play with him but found him not engaged. I tried to introduce him to pambaram or pandi but the peer pressure was too much for him," says Gandhi, 33. In Tamil, pambaram is a top and pandi refers to a hopscotch kind of game. Gandhi worked with the likes of Sun Microsystems, Oracle and July Systems -- his wife was Durairaj's colleague at TCS -- before making the leap into a business he knew nothing about but lived a parent's urgent need.

That need translated into Flintobox after he found the same frustrations among parents of other young children. "When we started, we had our fears, but from the feedback we got from the first box, we were clear this is what we wanted to do," says Gandhi. Durairaj says he and Gandhi were clear they would get the quality of the product right even if it took long. After the first box -- fashioned out of a paperboard box a network router came in -- demonstrated to parents, it took them eight months to be ready with the next set of boxes making their first hires in what today is a nine-person team.

Flintobox started beta-marketing (beta refers to a customer testing stage in a start-up's life) through Facebook and a parent who signed up early was Raja Selvam. "One way of looking at it is that it is expensive, but you need to go to 10 different shops to buy this. The bigger value is its quality and the thinking that goes behind it," says Selvam, a Chennai intellectual property lawyer. There is no competing service like Flintobox in India yet; some educational and craft online merchandisers such Tollabox operate in Germany. It is too early to see benefits in his son Mathew, Selvam adds, but one discovery lately has been the three-and-a-half-year-old's passion for colouring. "He needs to be pulled out of it even after an hour-and-a-half."

Aadhav and Mathew are among 600 kids who rip open their Flintoboxes every month. Some 450 of them are on subscriptions, typically of three months, and 150 are single-box sales. Revenues are about Rs 3.5 lakh a month and Durairaj expects that to climb to Rs 50 lakh a month by March 2015. He points to appetite on Flipkart, which Flintobox started retailing boxes on in February. "We started with 80 boxes (a month) and have a standing order for 300 a month from next," he says. The company has not spent "anything on marketing" and hasn't pushed sales in Delhi and Mumbai, two of India's biggest markets for toys. It has also started supplying boxes branded 'Inbox' to a toys retailer in Singapore and has enquiries from Tanzania and Nigeria.

Flintobox's costs are at about Rs 5 lakh a month and it expects to break even when it ships 1,500 boxes a month. It has come to its current size with just Rs 15 lakh in funding from GSF Accelerator, part of Global Super Angel Forum, an early-stage funding group that funded Bangalore-based Little Eye Labs that Facebook bought earlier this year. To scale up -- Durairaj says Flintobox needs money for technology, product development and marketing -- the company plans to raise around Rs 1.5 crore in coming weeks, which it expects to last about 15 months.

In Flintobox, are we looking at the next gorilla in India's Rs 8,000 crore toys market? Perhaps not. But the convenience and quality it offers to millions of parents of very young Indians -- and those overseas -- places it in a sweet spot with the opportunity to grow fast and profitably. For Gandhi, it is a different kick: "I make toys for my kid."

How Freshdesk has made customer support fun