In the years to come, the robust growth in Internet penetration and usage will disrupt existing business models and make way for new ones.
Rajan Anandan | Print Edition: Jan 4, 2015 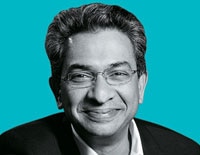 THE MOVEMENT FROM 35 MILLION ONLINE CONSUMERS TO 100 MILLION WILL IMPACT INDUSTRIES IN FUNDAMENTAL WAYS. The smartphone and the electronics industries will be the first. In the next few years, we will see new brands that will go from zero to hundred of crores of revenue in a few years by having products that will be distributed digitally.

The next 200 million Internet users - as we go from 300 million to 500 million - will access Internet only through mobile phones. It has all kinds of implications for internet companies, many traditional industries and the government.

The e-commerce industry that was non-existent a few years ago is today worth $5 billion. There are 35 million Indians who buy products online - electronics, apparel, baby products and so on. It will touch 100 million transacting users by 2016. There are only two countries where there are more consumers buying online - the US and China.

The movement from 35 million online consumers to 100 million will impact industries in fundamental ways. In China, Xiaomi, a company that was launched four years ago, has become the number one smartphone brand in China. This will begin to happen across industries in India. The smartphone industry and the electronics industry will be the first to be impacted. Over the next few years, we will see new brands that will go from zero to hundreds of crores of revenue in a few years by having great products that will be distributed digitally. Everything from electronics to apparel to even homes will be bought online. Recently during the first day (December 10) of the Great Online Shopping Festival, Tata Housing got 10,000 registrations for its homes!

There are a large number of well-educated moms with high disposable income in India. So e-commerce companies in the baby products space will do very well. If a start-up figures out to make a high quality baby product that is affordable and is smart at digital marketing, can you get to five per cent to 10 per cent share of the market and get to Rs 1,000 crore revenue in a hurry? Yes, absolutely.

In China there are thousands of brands that never existed before and have massive revenue because there are 300 million Chinese who buy online. China's e-commerce industry is now 50 per cent bigger than the US (based on Gross Merchandise Value). The reason is organised retail was not pervasive across China. Digital happened, they got connected and all of a sudden, they started buying online. India will go through the same cycle. I know there is a lot of concern in the ecosystem about pricing but all this will settle down.

Nevertheless, 70 per cent of India lives in rural areas. E-commerce companies will reach every nook and corner of the country over the next four to five years. I think the possibility for existing brands to increase their reach is going to be exciting; we will start seeing disruptive companies.

6 Million new Internet users are getting added a month but they are on 2G network. When someone is on a 3G network, they consume five times more data and spend a lot more time online. Hopefully in 2015, we will start seeing an inflection point in broadband access.

Moving on to entertainment, it is obviously the "billion user opportunity in India". What is the one thing we know for sure that 500 million Indians will consume for four hours every day? It's online video. Take YouTube: 60 million visit the site frequently. If you make affordable online video a reality, Indians will spend 3-4 hours a day watching online videos. But it is constrained by bandwidth; 20-year-olds like online video but they can't afford it and they can't get it. But as the broadband situation changes and disposable incomes go up, entertainment will become massive.

The other sectors that will impact India much more profoundly are health care and education. We don't have enough schools or teachers. The most innovative online education companies will come from countries like India because here is where the real need is. In health care, like in many other areas, we will see innovations that are India-specific and based on necessities. RedBus is an example.

That said, what are the two things I worry about? One is the pace of broadband. While six million new Internet users get added a month, the fact is that half of these users are on 2G networks. When someone is on a 3G network, they consume five times more data and spend a lot more time online. Hopefully in 2015, we will start seeing an inflection point in broadband access. There will be continued roll out of 3G. Airtel has launched 4G in Bangalore and Reliance Jio should launch sometime in 2016. Obviously, we need more spectrum. In education, for example, just putting PowerPoint slides on the Internet will not change the calibre of education. We need interactive videos like with the Khan Academy in the US. But to do video you need broadband. In health care, imagine a doctor talking to a patient in a remote village through a broadband that can transmit high resolution videos.

My second worry is that currently there is no Indian language content on the Internet. Much of the six million new Internet users getting added will be proficient in their local language. There are only 22,000 wiki pages in Hindi. We have 400 million Indians who are proficient in Hindi. Estonia has 1.5 million people and they have 55,000 wiki pages. However, building out the Indian language Internet has challenges. We need more access, keyboards that are easier to use and speech recognition capability. We need high-quality open-source fonts and 1,000x more local language content. We have launched the Indian language Internet Alliance and are very excited about the progress.

Rajan Anandan, Managing Director of Google India, has multiple avatars. A prolific speaker, he is also an angel investor and a mentor to budding entrepreneurs. Google's man in India is a former partner at McKinsey, was executive assistant to Dell founder Michael Dell, and has worked at Microsoft in India.

(As told to Goutam Das)

Administrative reforms must for nation's growth