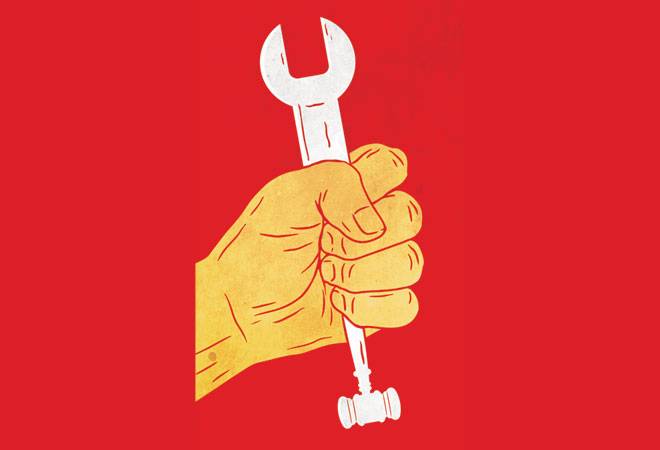 Neeraj Dubey, a labour law expert, recalls how one of his clients was once issued a notice for not putting spittoons at designated places in his factory. In another case, a factory inspector issued a notice to a businessman for not having enough plants around his factory. "These are the kind of issues over which employers are harassed," says Dubey, a partner with law firm Lakshmikumaran & Sridharan Attorneys, while arguing for overhauling the Factories Act, 1948.

The law is one of the over 200 enacted by the Centre and states that deal with safety, health, efficiency and well-being of people in a factory or production unit. Complying with complex provisions of each of these is nearly impossible. That is why, for decades, businesses have been demanding repeal of most of these and simplification of others. This demand has become amplified in the wake of the hit industry has taken due to coronavirus that is forcing it to scale down operations. The Industrial Disputes Act of 1947 is turning out to be a big hurdle in closing down factories and reaching a settlement with workers. "One of the biggest problems industries face is because of the Industrial Disputes Act. It restricts firms from retrenching employees even when the unit is unviable. Another is the Minimum Wages Act to protect workers; it distorts the labour market," says D.K. Srivastava, Chief Policy Advisor, Ernst and Young.

While there is a need to reform the decades-old labour laws to make India competitive, the government has to protect workers' rights, too, given that India has excess labour.

As many as 39.5 lakh job-seekers registered themselves on 997 employment exchanges across the country in 2017 (the latest data available) but only 4.25 lakh, or a little over 10 per cent, got jobs through these platforms. While many may have found work through other means, this is indicative of a poor job scenario. In the last two years, with GDP growth falling, the job market has seen an unusual spike in unemployment (see Unemployment Rate at Worrying Levels). The coronavirus has made the situation worse.

Without unemployment benefits and social security, workers are always at the risk of slipping into poverty. The existing labour laws have benefitted only organised sector workers, who account for 10 per cent of the workforce. "Those who think that the complex web of federal and state labour laws protect workers must realise that these have been primarily responsible for 90 per cent of our workforce of 47 crore people (pre-lockdown estimates) remaining in informal/unorganised sectors without minimum wages or access to social security," says Jayant Krishna, Senior Fellow, Center for Strategic and International Studies and Executive Director, Public Policy, Wadhwani Foundation.

The coronavirus outbreak has exposed the fragility of the Indian labour market. Mahesh Vyas, Managing Director and CEO of Centre for Monitoring Indian Economy, has estimated job losses at 12.2 crore in April.

The 44 Central labour laws are being compressed into four. The Code on Wages has already been adopted by Parliament, while three others are awaiting approval. "The Code on Wages has been notified. The rules are being framed. Two other Codes are under consideration of the (Parliamentary) Standing Committee, which is expected to give its report in the next 10-15 days. The fourth Code will soon go to the Standing Committee," says Labour and Employment Minister Santosh Kumar Gangwar.

The Code on Wages 2019 subsumes The Payment of Wages Act, 1936, a pre-independence law, and 71-year-old the Minimum Wages Act, 1948. The other two laws merged with the Code are the Payment of Bonus Act, 1965, and the Equal Remuneration Act, 1976. The aim is to simplify the definition of wages (there are 12 definitions in different labour laws). This is expected to make compliance easier and minimise chances of dispute while calculating compensation or bonus.

Similarly, the Occupational Safety, Health and Working Conditions Code, 2019, subsumes and replaces 13 labour laws, including the Factories Act, 1948, relating to safety, health and working conditions. The Code on Social Security & Welfare will subsume nine laws such as the Employees' Compensation Act, 1923, the Maternity Benefit Act, 1961, the Payment of Gratuity Act, 1972, and the Unorganised Workers' Social Security Act, 2008.

"The codes seek to simplify the rules. They seek to strengthen rights of workers. Once they are enacted, many actions of companies will not result in criminal action. They will be treated as irregularities," says former Labour Secretary Shankar Aggarwal. "They will give flexibility in hiring and sacking," says Aggarwal, instrumental in initiating these reforms.

These changes are vital as moves to improve the ease of doing business have largely benefited big companies. Smaller players continue to suffer from a high compliance burden. "The ease of doing business for small and medium enterprises in most of India is traumatic. This is the key problem. It is not the issue of the Centre. There is lack of responsiveness and indifference at state and local government levels," says Ravi Venkatesan, founder of coalition Global Alliance for Mass Entrepreneurship and former Chairman of Microsoft India.

Many labour law experts say the new codes are going to give employers a lot of leeway in dealing with workers. "The codes will dilute the elaborate labour rights that were conceived in each and every law," says XLRI Jamshedpur Professor and Labour Economist K.R. Shyam Sundar.

The Code on Industrial Relations has provisions for fixed-term employment, making it easier for companies to hire and fire. Also, while a provision requires companies employing 100 or more people to take government approval to retrench staff, the threshold can be changed through a notification, diluting the law in favour of employers. The draft Bill has also redefined strike to include mass casual leave.

In the middle of all this, some states such as Uttar Pradesh, Madhya Pradesh and Gujarat, presumably with tacit support from the Centre, have diluted the laws, triggering uproar among labour unions. The dilution ranges from suspending key laws for three months to 1,200 days. One of the contentious decisions has been an increase in working hours in factories from eight to 12 to help industry increase production to make up for the output lost during the lockdown. But it has not gone down well with labour unions. "Suppose, in a factory, 4,00,000 man days of work is created in a year. Considering an eight-hour shift, it will require 50,000 workers. Now, if work hours are increased to 12, about 34,000 workers will be needed. This means the number will come down by, say, 15,000 or so," says Indian National Trade Union Congress Vice President and former Rajya Sabha member R.C. Khuntia.

While labour unions have come face to face with state governments over easing of labour laws, some say even the draft Codes introduced in Parliament will have to be re-looked at in the post-Covid scenario. "In the light of the experience of the pandemic, enormous changes need to be made in the scope of these laws. For example, Occupational Wage Survey (OWS) does not cover the unorganised sector. You now need OWS in the unorganised sector, too," says Ravi Srivastava, Director, Centre for Employment Studies, Institute for Human Development.

Not only that, former JNU professor Srivastava says the new codes will make things worse. Further, different codes have defined key terms such as enterprise, establishment differently, leading to more ambivalence, he says. "Because they have tried to condense too much into too little, important aspects of the law have been taken out and relegated to rules or notifications. Basically, it will empower labour bureaucracy. This is neither in the interest of employers nor workers," he says.

Industry wants minimum interference in the labour market and wants to leave wage discovery to market forces. Many consider the current pandemic as an opportune time, with least protests expected, to unleash reforms to make India an attractive destination for foreign players, especially those planning to exit China amid changing world political equations. "The government should relax labour laws to attract foreign investment but for that the government should create zones, let's say the Kandla zone, where investments worth hundreds of billions can come. You can relax labour laws to some extent but it does not mean hire and fire. It only means that the rigour of labour laws which are there today should not apply. It also does not mean labour should not be provided congenial working conditions," says senior Supreme Court advocate Dushyant Dave.

At a time when nations are competing for foreign investment, rigid labour laws could be a dampener. For instance, the proposed Labour Code on Industrial relations retains the provisions of the current law on trade unions which say that seven or more members of a trade union can apply to register a union that has membership of at least 10 per cent of the workers or 100 workers, whichever is less. Labour law practitioners who take up cases of companies say minimum workers needed to register a union should be increased as this will expand the scope of diverse viewpoints which will benefit both employees and employers. This will also curb multiplicity of unions in a factory and weed out nuisance makers, says industrial and labour law advocate M.S. Sankhla.

There is urgent need for a legislative framework that facilitates growth and investment while according equal importance to welfare of workers. As coronavirus pandemic has exposed the conditions under which labourers work, the government may need to add provisions for universal social security coverage and unemployment benefits in the new laws. While proposed labour codes are generally seen as employer friendly, a balancing act could be done by providing unemployment benefits on the lines of the US and Europe. "While laws are being modified to offer labour flexibility to firms, they also have to ensure labour welfare to protect the interest of all stakeholders," says Pooja Ramchandani of law firm Shardul Amarchand Mangaldas. "One of the ways to do this is to provide unemployment benefit. It is currently available to a very small section of people, earning less than `21,000, under the Employees State Insurance Act. There should be unemployment benefits for everybody, except CXOs," she says.