Tanya Dubash is changing the Godrej Group into a brand that appeals to the young. 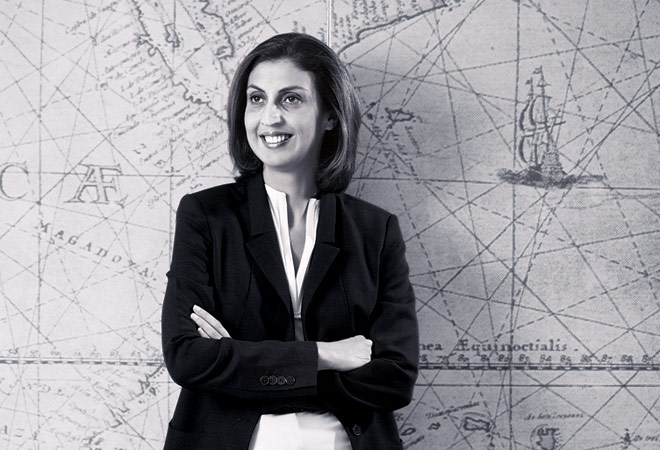 At the Godrej family home, business is the most talked about topic at dinner time. Years ago, when conversation veered towards how the century-old family business was being looked upon as an ageing brand, Tanya Dubash, the eldest daughter of Godrej Group Chairman Adi Godrej, quickly got into action.

The company's myriad businesses - from locks to soaps and mosquito repellents to real estate - were touching the lives of 400 million Indians. The Godrej name was considered trustworthy and dependable. The only problem was that it did not seem to be appealing to the young. As more than half of India's population is below 25, Godrej could not take it easy. 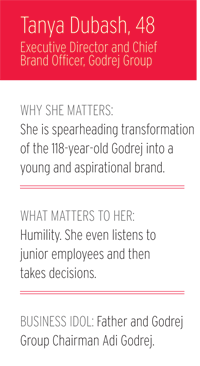 After deliberations, Dubash, known among other things for a sharp marketing mind, decided to take up the responsibility for a rebranding exercise in 2008, called Godrej Masterbrand Strategy. She roped in the UK-based brand valuation company Interbrand and used its suggestions to come up with a plan to create a strong brand franchise focused on building cutting-edge products and changing the strategy for retail as well as attracting talent.

FULL COVERAGE:India's Most Powerful Businesswomen 2015Ensuring 'Brighter Living' to consumers and other stakeholders became the group's new brand promise. It also did away with its red corporate identity and moved to a more vibrant one with shades of green, pink and blue.

Interbrand valued the Godrej brand at $2.9 billion in 2010. Dubash set a goal of growing it 10 times in 10 years. Though the company hasn't undertaken another brand valuation exercise, Shirish Joshi, the COO of Strategic Marketing Group at Godrej, claims that the value of the Godrej brand is now more than $4.1 billion. "We set ourselves a target of growing by 25-26 per cent year-on-year. We have been consistently clocking that rate since 2010."

At the product level, Godrej is no longer just about soaps and locks. From premium hair and personal care products to washing machines that emit ultrasonic rays and remove stains within minutes and door cameras that can store up to 100 photographs to frozen vada pavs, the offerings are now all about brighter and smarter living. "One of Tanya's biggest contributions in the past few years has been re-inventing the brand and logo in tune with the taste of modern consumers across the globe," says Bala Balachandran, Professor of Accounting and Information Management at Kellogg School of Management at Northwestern University and founder and Dean of Great Lakes Institute of Management. He was on the board of Godrej Consumer Products from 2004 to 2015.

The re-positioning led by Dubash, according to A. Mahendran, former Managing Director of Godrej Consumer Products, not only resulted in robust revenue growth for the group but also helped it attract better talent.

The group is now in the second phase of its Masterbrand strategy. Now, the focus is on going digital.

The most noteworthy initiative is from Godrej Nature's Basket, the group's premium food retail chain, which has partnered with online marketplaces such as Snapdeal and Amazon for distributing its products. Nature's Basket has also forayed into omni-channel retail. "Digital is going to be a major focus across all businesses. It will help us create differentiation," Dubash had told Business Today in an earlier interview.

Dubash once said that had she not been a part of Godrej, she would have probably been a teacher or a counsellor. Her colleagues at work say she is humility personified. "If you were to put a CAGR (compound annual growth rate) to Tanya's growth as a business woman, I would say that it is not only consistent but probably higher than most of her woman counterparts in the industry. However, what stands out is her humility," says Mahendran.

Balachandran of Kellogg agrees with this view. "She is a good listener and learner. She listens to junior employees and then takes decisions. She is humble, soft and a good human being who respects both her elders and her subordinates."

Kirthiga Reddy is working on making Facebook a sustainable business