India is emerging as one of the largest gig economies thanks to technology and digital economy.
Sonal Khetarpaland Sairee Chahal, Founder of Sheroes, a women-only social networking platform. The platform has many gig workers. It also offers a service that puts together teams of gig workers for corporate assignments. (Photographs by Reuben Singh)

It is 12.40 pm when at Droom's funky office in Gurgaon's Sector 18, notes from a flute start playing on the speakers. It sounds like a bhajan. We are told it is part of a transcendental meditation plan that helps employees relax. The music plays for a few minutes, twice a day. Soon after, employees noisily gather around a yoga instructor right in the middle of the office floor. It is time to practice "laughter yoga".

Those advising the automobile marketplace company on transcendental meditation and yoga are not employed with the company - they are gig workers who consult. Droom is nearly five years old as a company and has been using gig workers frequently even for core work. When the firm was starting up, founder Sandeep Aggarwal hired a gig worker in Ukraine to create the logo and the first three pre-launch pages of his website. Initially, the company didn't employ enough full timers for the emerging technology work in Artificial Intelligence, Internet of Things and Blockchain either. Gig workers did the job.

"The motivation to bring in gig workers was specific skills that we required but we didn't know if we needed them on a steady basis," Aggarwal says. "Even if we needed these skills frequently, that stage hadn't come yet, or we couldn't afford it as a company," he adds. The gig economy, therefore, helped Aggarwal convert what could have been a fixed cost structure into a variable one. "It is like the shared economy. It is person on demand," he says.

What began with start-ups has caught on with the more established corporates as well as they have realised the advantages of the flexibility that gig workers bring to the table.

Product cycles are shrinking and technology is disrupting industries at a rapid rate. Companies no longer want to be saddled with a high fixed cost. Any planning of the workforce, therefore, isn't complete without thinking through a blended model where gig workers work alongside those on the payroll. Sandeep Kohli, Partner and Talent Leader at EY, says that at any point in time, 4-5 per cent of the company's workforce is gig workers. "Globally, they are now a part of the manpower planning strategy right from the beginning. It isn't opportunistic anymore the way it was earlier, on an ad hoc basis. Now, whenever we do workforce planning for projects, we see what work should be done by our own employees, by fixed term hires (full-time workers but on contract), and then gig workers," he says.

HR talent marketplace Noble House recently conducted a survey amongst 800 human resource (HR) professionals and independent consultants. The firm reported that its study "revealed that 70 per cent of the corporates in India used gig workers at least once or twice in 2018". About 17 per cent used gigs more than five times in the year as they looked to supplement the skills of existing workforce, reduce costs or fill temporary vacancies.

How did India rise to become one of the largest gig countries in the world? The fixed cost to variable cost scenario is true for every country, but in India, an enabling ecosystem fell in place.

Vivek Sundar, COO of Swiggy, explains that a gig economy cannot take off if the regulatory burden is high, like in Western Europe. India is in a sweet spot as of now because gigs are not yet regulated. Further, "millennials have a multi-tasking view of life and gig economy is a place where you bring together technology, workforce and the digital economy," he says. 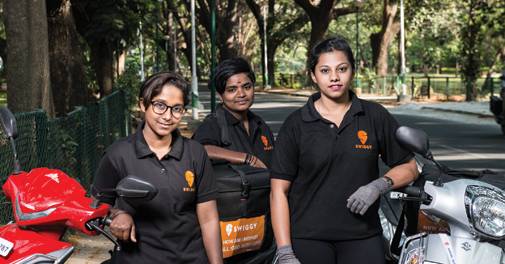 Food delivery start-up Swiggy's operational model is based on gig workers. It has 1,25,000 full-time and part-time delivery executives

Technology has also led to creation of curated marketplaces such as Flexing It, a company that connects organisations to professionals for short-term projects and consulting assignments. "We have algorithms that match the freelancer with the projects on the basis of 20 parameters such as expertise of freelancers, their preferences such as whether they want to work on-site, remotely, full-time, or part time, among others," says Founder and CEO, Chandrika Pasricha. Her company caters to white collar gigs with about 60,000 of them on board, everyone from strategy and marketing consultants to HR, technology and supply-chain professionals.

Sheroes, a women-only social networking platform, has many gig workers such as home chefs, make-up artists, mehendi artists and designers. The company came up with Managed Remote Solutions (MARS) that puts together teams of gig workers for companies. But the solution goes beyond matchmaking and into project management. "We have 5,000 professionals who are certified on MARS," says Sairee Chahal, Founder of Sheroes. "Delivery services, for instance, have riders. Every rider has a process of on-boarding and certification. There is documentation collection, KYC... We do that for some companies. Similarly, we work on social media - when you send a tweet to some brands online, someone has to respond in five minutes. These women working from home are doing it," she explains. On an average, a gig worker earns Rs25,000 a month if she works eight hours a day and five days a week.

In many ways, the rise of digital platforms has differentiated gig workers from freelancers. Chahal likes to cite the analogy of a 'hunter' versus a 'farmer'. Freelancers are hunters because they look for work and pay, waiting long periods between jobs. Digital platforms like hers can ensure regular income for gig workers but they need to farm - start small and grow over time on the back of stronger relationships and work that is measurable.

Yes, digital marketplaces that do the matchmaking exert a huge amount of control such as working for a certain number of hours, payment mode and frequency, and others. 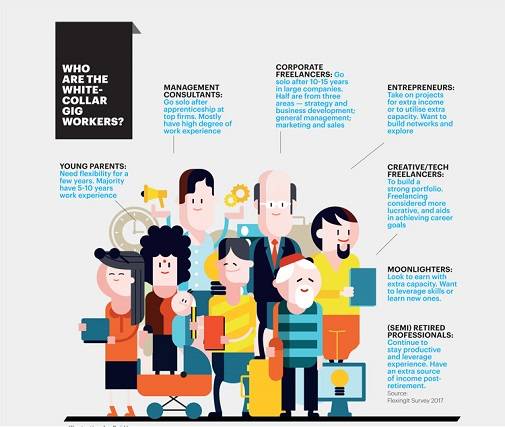 Rituparna Chakraborty, Executive Vice President of staffing company TeamLease, therefore, offers a word of caution. Although the definition of who is a gig worker appears to be evolving, it is broadly understood that gig work is about choice. But for many in India, gig work is not about choice; it is a necessity. Also, the control digital platforms exert implies less choice for the worker. "When people say India has the largest gig economy in the world, they are referring to the fact that India has the largest informal economy in the world. No rules apply," Chakraborty says. "Gig economy emerges in economies that are developed and have 100 per cent of the workforce in formal employment. It emerges automatically as a matter of choice for somebody who is looking for livelihood options. And it is not the last resort," she adds.

The first structural transition India needs to witness, Chakraborty says, is from informal to formal. "And then we can talk of the gig economy. It is a matter of choice - one prefers to become a gig worker when one is confident about his skills and his experience in the past. But for people in the informal sector, it is not a lifestyle statement."

Tushar Srivastava is visiting Australia. A sports enthusiast, he followed India's cricket tour there and caught up with the Australian Open. He is a gig worker who can work from anywhere. Working independently is a lifestyle choice for him. Srivastava, who works on management consulting projects, took to freelancing after six years of working full time, first as a management consultant and then in a start-up. He started by enrolling in a US-based marketplace for freelancers in 2016. "I was blown away by the independence and flexibility it offers, and of course the money. I have seen how I make much more for a project than full time employees," he says. Income can also depend on the client. Working for Indian clients often means doing more for less - a version consistent among all gig workers. "Indian clients negotiate harder but those who have the experience, capability and critical skills required for the project, can sell themselves and stand their ground," says Srivastava.

The PayPal freelancer report of 2018 found that gig workers had a mean annual income of Rs19,02,785, but when polled about their top dislikes, most cited 'irregular income' followed by 'difficult clients'. Tougher negotiations apart, a common fallout of being in the gig economy, at least in the white collar segment, is delayed payments.

"It is not that I don't get paid but that there is a delay, mostly of about two months," Srivastava says. "That's mostly because after a project I have to raise an invoice which is cleared by the marketplace and then processed by the client, which often takes time. This trend is consistent across companies and countries I have worked with. Since I know payments take this much time I plan my cash flow accordingly."

One of the reasons for delayed payments is that the required processes are not in place in many companies. Shivani Saraf, a gig marketing expert, says contracting is often a long process, especially in large organisations. "In larger organisations, the HR and legal teams get involved even when a project is for a month or two. This leads to delays," she says. "But, it is necessary too, since as a freelancer I am exposed to a lot of insider information. No one can do much about these procedural delays unless they set up different processes for gig workers," she adds. Another key concern for freelancers is taxation. As these professionals raise invoices to a company, they pay upfront 18 per cent GST (which only gets recovered once they receive the payment) and the client too deducts 10 per cent TDS on the due amount. "Almost 28 per cent of their payment gets blocked upfront, which often affects their working capital," says Amit Jindal, Partner at tax advisory firm Felix Advisory. Currently, for freelancers, GST is applicable on receipts of more than Rs20 lakh annually. Pre-GST, freelancers with receipts of more than Rs10 lakh per annum had to pay 15 per cent service tax. Even though GST is a higher rate, one can claim for input tax credit on all expenses. Earlier, input credit was allowed only on expenses related to services.

The gig economy and digital marketplaces are evolving fast. It is only a matter of time before issues listed above are sorted out. They better be, since digital marketplaces are a two way street. There are ranking systems where gig workers are ranked. Gigs can rate companies, too. As the space evolves, and more companies get their processes in place, both workers and employees will benefit.

How It Stacks Up