Police reforms: Operational Autonomy is Key to Run the Force

ABOUT: The structure of the police organisation is essentially a relic of British times.
By Julio Ribeiro | Print Edition: January 17, 2016 ABOUT: The structure of the police organisation is essentially a relic of British times. Despite the amendments that have followed, Indian policing system remains stuck in a bygone era, even though the threats and the criminals they are supposed to tackle have changed beyond recognition. In this article, Julio Ribeiro, one of India's most feted police officers, a former commissioner of Mumbai Police, and former director general of Punjab Police during the era of militancy in that state, looks at what needs to be done to make the police in India fit for the next 25 years.

When I joined the Indian Police Service 62 years ago, in 1953, the British had just left our shores and, along with them, the English officers who had dominated the senior ranks. But their legacy of integrity and justice continued for many years. Corruption, which is the biggest problem, did exist even in the days of the British but it was confined primarily to the junior ranks. As far as the supervisory cadre of the Indian Police Service was concerned, there might have been a few odd exceptions, but even in those rare cases, there was peer condemnation that made them cautious. Since the senior ranks were predominantly honest and just, the subordinates did not openly and boldly transgress the written codes for fear of punishment. (Photo: Mandar Deodhar)
These equations have changed now. The get-rich-quick-at-any-cost value system prevalent among today's young has spread in the police force just as it has spread in all other spheres of public life in the country. Many young entrants to the Indian Police Service join with the express purpose of amassing wealth by means that are far from legitimate. It is fortunate that still there are officers of integrity and competence towards whom people gravitate when rank injustice is perpetrated by elements patronised by political functionaries.

People ask me how I could enforce a measure of people-friendly policing 30 or more years ago. I reply that I was a leader, in charge of my own men, and I was responsible for their discipline and performance. No bureaucrat or politician interfered in my management of the force under my command. The politicians confined themselves to their role as the protector of the rights of the people who had elected them to office. If there was miscarriage of justice or a rogue police officer out to make a killing, the politicians would bring it to my notice knowing well that I would carry out my constitutional duty of ensuring that the law is upheld and enforced by disciplining the officer. Sometimes a politician, eager to dispense patronage and garner voter support, would take the side of the rogue, but if I stood my ground and pointed out to him that I was merely upholding the law as enacted by legislatures, he or she would sagely retreat.

The most frequent interference in police administration comes in the form of requests for postings and transfers of subordinates, who approach politicians either through influential contacts or by other means which the reader can guess, but is best not spelt out. If a senior officer stands firm and does not surrender to such demands, he is ultimately respected and left alone, particularly if the general public has faith in his leadership. Politicians would hesitate to pick on senior officers who enjoy the backing of the general public and of their own subordinates. And, such support would come if and when the senior officer practices what he preaches, is honest in his dealings and does not take sides. 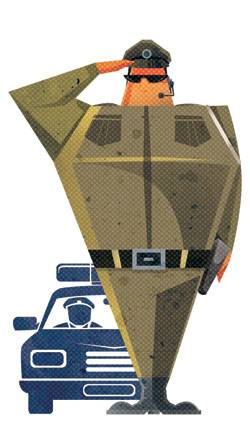 In my days, the head of the police force was a very respected official who represented an institution. His was the last word in all matters of discipline, transfers and promotions. If the senior officers were themselves men of integrity and honour, just and fair in their dealings without subjective biases, the administration ran smoothly. It was the duty of the political class, aided by the bureaucracy, to choose honest and competent police leaders at the cutting edge. In my early career I noticed that a minister and his secretary went strictly by the advice and judgement of the Director General of Police who knew each of his men and what each was capable of. It was only after the politicians started meddling in transfers and promotions with the active help and connivance of the bureaucracy that things went awry.

Presence of biases that are ingrained and not capable of being dispelled during training should disqualify the candidates. In fact I would even advocate that a diploma in police science be introduced at the senior school level and a degree at the university level to qualify candidates for policing jobs at different levels of entry.

In the old days, all transfers and promotions up to the rank of deputy SP were made by departmental superiors. The politicians did not interfere. Personnel issues relating to officers of the rank of SP and those belonging to the IPS were controlled by the government, which meant the minister in charge of the home department, assisted by the additional chief secretary. Now, by law, this arrangement has been altered to enable the political class and the bureaucrats to decide, leaving the police hierarchy powerless and in a shambles.

All recommendations of the National Police Commission on Police Reforms have been accepted, except the crucial ones that curb the powers of politicians and bureaucrats to interfere in appointments and transfers. This is the real crux of the problem of command and control. If the subordinate ranks know that they can flout their bosss order because the power to discipline them has been taken away, the whole gamut of police administration collapses. This is what is happening today!

People feel that policing is in the grip of widespread inefficiency, incompetence and corruption. I agree with the corruption charge. It has grown exponentially because the grip of senior officers on their own subordinates has loosened to such an extent that it will take years to reverse the trend. I partly agree about the inefficiency, which is the direct result of corruption. However, it must be admitted that these are also times when the police have done very well even in difficult circumstances, particularly in law and order situations. I do not agree about incompetence. On the contrary, today, the officials and men are of much higher calibre than in my days. They are better informed, better educated and better trained. They are also better equipped and have the clear advantage of advanced technology. If they prove incompetent, it is only because of the culture of corruption.

When I say that the entrants in the police force are better educated and informed, I must record a rider - they may not be interested in the job of policing as such. Many join because of the absence of alternative employment. For instance, old police officers send the least qualified of their children for recruitment. It is essential, therefore, to test not only the mental and physical attributes of aspiring recruits, but also their suitability for policing, their attitudes towards the poor and the weak, their attitudes towards women, children, the depressed classes and the minorities. Presence of biases that are ingrained and not capable of being dispelled during training should disqualify the candidates. I would even advocate that a diploma in police science be introduced at senior school and a degree at the university level to qualify for policing jobs.

It is of utmost importance to ensure that entrants at all levels are not required to bribe selectors to secure jobs. Our experience with the State Public Service Commissions and departmental bodies entrusted with recruitment has been wanting, at most times, though with some noticeable exceptions. People who are required to pay for securing jobs are going to prey on the public as soon as they don the uniform. This is a sure recipe for encouraging corruption and merits a show of public displeasure to prevent it from happening.

It is of utmost importance to ensure that entrants at all levels are not required to bribe selectors to secure jobs. People who are required to pay for securing jobs are going to prey on the public as soon as they don the uniform. This is a sure recipe for encouraging corruption and merits a show of public displeasure to prevent it from happening.

The bottom line is that the police force requires top class leaders who are not only competent, but men and women of unimpeachable integrity. Great pressure has to be applied on political leaders entrusted with the task of making such top-level appointments. Once good people are selected and appointed, they should be given operational independence to run the force, which includes appointments, transfers, promotions and punishments, as well as the prevention and detection of crime in accordance with the truth and the law of the land. About that there should be no compromise.
Tags: Police | Autonomy | British | Policing | Police officer | Mumbai Police

Smart Cities - Five Mistakes of the West India Must Avoid