Back in the hunt

The slowdown has ended but core sector PSUs remain favoured recruiters for some of India's best talent.

During the campus recruitment season at the Indian Institute of Management, or IIM, Bangalore in 2009, Anith Prakash, a final-year student of the post-graduate programme in management, was in a fix. An engineer from Anna University, he had three job offers in hand from General Optics, Bharat Petroleum Corporation Ltd, or BPCL, and Indian Oil Corporation Ltd, or IOC. 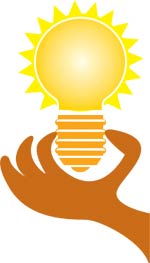 General Optics was paying almost 30 per cent higher than the next best offer from IOC. But after careful deliberation and some advice from his family, Prakash took up IOC's offer. The reason was a better job profile. While General Optics was offering him a sales job, at IOC he was made a part of the team running the supply chain optimisation department, which forecasts the demand for oil and designs the supply chain in advance for cost savings and seamless distribution. "Our division is fairly new and we are setting up the processes and trying out new things. The learning opportunities are immense," he says.

Consider the example of Niraj Chaturvedi, a mechanical engineer. On seeing an advertisement from NTPC Ltd for the post of Deputy Manager (Mechanical) in leading dailies, he promptly sent in his resume and got the job. "I had worked with the private sector for over 10 years before joining NTPC in 2008. Besides the job content, NTPC's brand name was a major pull," says Chaturvedi, adding that he had to take a pay cut of 40 per cent in the new job.

Prakash and Chaturvedi are not alone. Jobs in the core sector are once again being coveted by MBA graduates and engineers. In 2010, the three biggies - Oil and Natural Gas Corporation Ltd or ONGC, NTPC and IOC - together recruited over 2,200 engineers and management graduates from the top colleges, including the Indian Institutes of Technology or IITs, the IIMs, the National Institutes of Technology, or NITs, among others. In February 2010, when NTPC announced 300-odd vacancies for engineers at the entry-level, it was inundated with over 96,000 applications.

Niraj Chaturvedi (second from left) and his colleagues at the NTPC plant in Dadri, UP
For most job seekers, besides a challenging job profile and the opportunity to be associated with a big brand, there are other pulls as well. For Chaturvedi, it was due to a "work-life balance and unlimited medical facilities". NTPC has now roped in Apollo Hospitals Group to look at the possibility of setting up specialty hospitals in its townships. The company has also tied up with engineering and medical colleges such as Birla Institute of Technology, or BIT, Mesra, the Manipal Group and the Thapar Institute of Engineering and Technology for giving preferential treatment to the children of its employees at the time of admissions. Says S.P. Singh, Director of Human Resources at NTPC: "Today's youth want to work in and around the cities due to access to better facilities. So we have tried to address this issue by providing better educational and medical facilities in our townships." The recent economic slowdown has worked in favour of PSU recruiters. "The perception that PSU jobs are recessionproof has not gone away completely," says Tauqir Hussain, Executive Director (Chief, HRD) at ONGC, adding that till 2007, the company was not a preferred employer. "In fact, some engineering colleges asked us not to come to their campuses for recruitment. However, things changed dramatically after the downturn," he says.

Most frontline core sector giants also have low attrition rates due to job security and future retirement benefits. But the PSUs admit that retaining talent will emerge as the biggest challenge in the future.

IOC's Anith Prakash (left) and Sudhir Bhalla
ONGC, for instance, says its cost-to-company, or CTC, at the entry level at over Rs 12 lakh per annum is competitive enough to hire talent, but admits that stopping attrition at the mid-level will be difficult. "Our mid-level is very heavy and that is the reason the company has not been able to promote a lot of people," says Hussain. 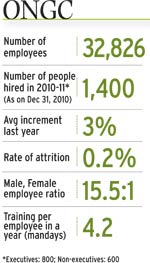 Sudhir Bhalla, Director of HR at IOC, too, admits that his biggest challenge is to keep the employees motivated. "PSU salaries do not rise at the same pace as the private sector," he says. IOC is trying to keep employees happy by increasing their take-home salary. "We have introduced the 'cafeteria approach' in the last pay revision (in 2008), which allows executives to choose from a set of perks and allowances (as per their wish) instead of a fixed set of allowances. This enables people to increase the cash component of their salary substantially," says Bhalla.

For the moment, though, the core sector behemoths are once again on the prowl on the MBA and engineering campuses and are making a pitch for the country's best and the brightest.