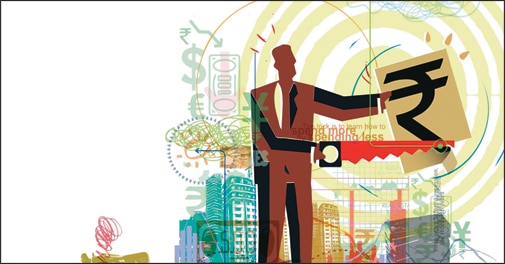 Ranjay Gulati
In the middle of the 2008 recession I spoke to the leadership team of a large company and asked it how many of its units were facing budget cuts. The members all laughed nervously and raised their hands. I then asked how many of them had seen their budgets increase. They laughed again but this time no one raised their hands. I then asked them if this situation was good or bad. They did not understand my question and responded with a puzzled look. I went on to explain as follows.

If you are not increasing your spending in any domain at this time then it means you are not sowing the seeds for future expansion. You are not going after anything. Instead, you are falling into the trap most businesses fall when the going gets tough, which is to simply play defence and cut back across the board with the intention that we must live to fight another day. All this is in the face of evidence that perhaps the best time to leapfrog competition is when markets are down and not up. And yet, we back away precisely at this time. The point I was trying to make was that the thought of going after markets or attacking competition just hadn't crossed their minds.

Then I asked them who was in charge of budget cuts. They pointed to the finance function. I said if finance is responsible for allocating scarce resources, a question to ponder is what does it know about customers and markets and what customers want or don't want? Further, the preferred approach for budget cuts was the proverbial cheese-slice approach where each unit was impacted equally. In doing so, the company was now allocating its limited resources with limited knowledge of customers or markets. If we look at this example objectively, there is something terribly wrong here. The company was not attacking its market in an environment where everyone else was not doing so either. And the person/division that was cutting back had no idea what customers wanted.

Pure Defence
I think the realisation here is that in a low-growth and turbulent environment most companies go into pure defence mode, where the entire focus is on how do we survive and wait to fight another day. The only thing the companies can think of is cutting back on costs. But does this really work?

I, along with Nitin Nohria (of the Harvard Business School) and Franz Wohlgezogen (of the Kellogg School of Management) wrote a piece titled Roaring Out of Recession for Harvard Business Review, which was published in 2010. In this piece we looked at corporate performance during three global recessions: the 1980 crisis, the 1990 slowdown, and the 2000 bust. We looked at 4,700 public companies and studied their performance in three periods: the three years before the recession, the three years after, and the recession years.

An excellent example of this is Sony, which announced a cost reduction target of $2.6 billion in December 2008. The company planned to close several factories, fire employees and delay investments in newer technologies. This strategy was similar to the one it followed during the 2000 downturn, when it cut its workforce by 11 per cent, its research and development spend by 12 per cent, and its capital expenditure by 23 per cent, over a two-year period. This helped the company increase its profit margins briefly, but sales tumbled.

During a recession, you say I am going to cut back more than I need to in some areas and expand in some. You must spend more by spending less

While Sony managed to boost its profits briefly, it has struggled to retain momentum since then. It has tried developing new products like electronic book readers, but these markets have been taken over by swifter rivals like Amazon.

The trouble with concentrating totally on cost-cutting during a recessionary or a low-growth environment is that managers approach every decision through the lens of minimising costs. The other thing is those responsible for resource allocation frequently have no idea of either the customers or the markets the company operates in, and prefer to make across-the-board cuts. This leads to the company paying no attention to initiatives which might lead to future growth.

Also, it is worth remembering that there is a collective paradox here: when everyone is playing defence, what should you be doing?

Pure Offence
But pure offence does not work either. Being overly aggressive during a recession and ignoring early warning signs, such as customers clamouring for lower prices, is not viable either. In fact, we found in our research that such firms stand only a 26 per cent chance of becoming leaders after the downturn ends.

An excellent example of a company that became a victim of too much aggression during a recession is Hewlett-Packard. At the height of the recession that followed the dotcom bust in 2000, the company under the leadership of Carly Fiorina drew up an ambitious change agenda. As Fiorina put it: "In blackjack, you double down when you have an increasing probability of winning. We're going to double down." Among other things, the company bought Compaq for $25 billion, spent $200 million on corporate branding and also went about spending $1 billion on expanding the availability of information technology in developing countries. These initiatives strained the organisation and spread its resources too thin. After the recession ended, and growth returned, the company couldn't match the profitability levels of competitors like IBM or Dell.

So, pure offence does not work and neither does pure defence. What works is being able to selectively blend both. The key is how you learn to play defence and offence at the same time. What you do is, you say that I'm going to cut back more than I need to in some areas and I'm going to expand in some areas. The trick is to learn how to spend more by spending less.

What I am proposing is a zero-budget answer. In order to spend more you have to spend less. Before you can spend more you have to figure out what are the things you are doing that do not add any value to the customer. And you will be amazed how much inefficiency pops up. Taking a disciplined approach to resource allocation that is informed by a deep understanding of what customers value and what they don't becomes the key to success. Cost cutting has to be done in a disciplined, methodical way because it's remarkable how many things organisations do that do not add value to customers. So, that is the starting point.

But politically it is very challenging to do. Are you going to tell three people that I'm cutting back your budget and then tell one person I'm increasing your budget? Instead many organisations prefer an egalitarian way, where all share the pain equally. Every department has to cut back on its budget equally.

A deeper issue that holds back organisations from leveraging such opportunities is their inability to truly engage with their customers and markets. Something that should be the foundation of every business - being customer-centric - doesn't materialise easily. The problem isn't usually lack of market knowledge. It's usually embedded in the organisation itself. The devil here is inside and not outside the organisation! Most large organisations are built around production and distribution. You organise around product to make sure you are intensely focused on developing and selling outstanding products. You organise around geography to effectively distribute those products. And you add into this mix your functional organisation that is created to be efficient and build expertise within key functions. But somewhere in this whole equation the customer gets lost. The bureaucratic morass here impedes the ability to operate in concert to take on difficult markets.

Very few companies master the skill of playing offence and defence and doing so in a way that is centred around their customers. In our research we found that only nine per cent of all companies came out of a recession stronger than before. These companies outperformed industry rivals by at least 10 per cent in terms of sales and profits. These companies re-examined almost every aspect of their business model. They looked at how they have configured supply chains and structured/reduced their operating costs on a permanent basis. This ensured that when demand came back again, their profits grew faster than that of their competitors. Also, money that was saved in one area was invested in another area.

A good example of this is Staples, an American office supply chain store, and how it withstood the 2000 recession. It closed down many underperforming facilities but increased its work force by 10 per cent to support the high-product categories and services. It also contained its operating costs and came out of the recession much stronger and more profitable. Its sales more than doubled from $7.1 billion in 1997 to $14.6 billion in 2003. In comparison, sales of Office Depot, another office supply company, went up by a mere 50 per cent from $8.7 billion to $13.4 billion during the same period. In fact, Staples was 30 per cent more profitable than Office Depot in the three years that followed the recession.

Ranjay Gulati teaches organisational behaviour at Harvard Business School. He is also the author of Reorganize for Resilience: Putting Customers at the Center of Your Organization. (As told to Vivek Kaul)
Tags: Ranjay Gulati | Recession | Companies cutting costs