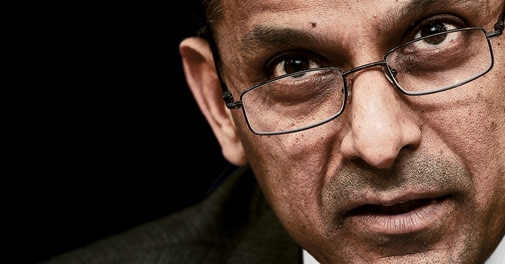 The common goal [of the RBI and government] is growth with low inflation. But our view of the time frame in which we will achieve that and the necessities for that step can be different from that of the government: RajanPhoto: Shekhar Ghosh

If you can keep your head when all about you
Are losing theirs and blaming it on you;
If you can trust yourself when all men doubt you,
But make allowance for their doubting too:
If you can wait and not be tired by waiting,
Or being lied about, don't deal in lies,
Or being hated don't give way to hating,
And yet don't look too good, nor talk too wise

From "If", a poem by Rudyard Kipling

Raghuram Govind Rajan cited excerpts from this famous poem by the acclaimed English writer on September 4, the day he took over as the 23rd governor of the Reserve Bank of India (RBI). The poem, he said, lists the requirements of an ideal central banker.

Rajan's reference to the poem in his maiden speech offers a glimpse into his mind - the mind of someone who is determined to do the right thing and not be cowed by criticism.

Whatever doubts remained about Rajan's stoutly independent nature evaporated into the air when Business Today met him at the RBI headquarters on South Mumbai's Shahid Bhagat Singh Marg after he announced the secondquarter monetary policy review. Sitting comfortably in the 18th floor visitors' room, filled with portraits of previous RBI governors (his predecessor Duvvuri Subbarao's portrait has yet to be made), he wasted no time in asserting his autonomy. "Did you get a brief?" we ask, hoping to provoke Rajan, who has been handpicked for the job by Finance Minister P. Chidambaram, into saying something newsworthy. "Brief? From?" he shoots back with a stony face. 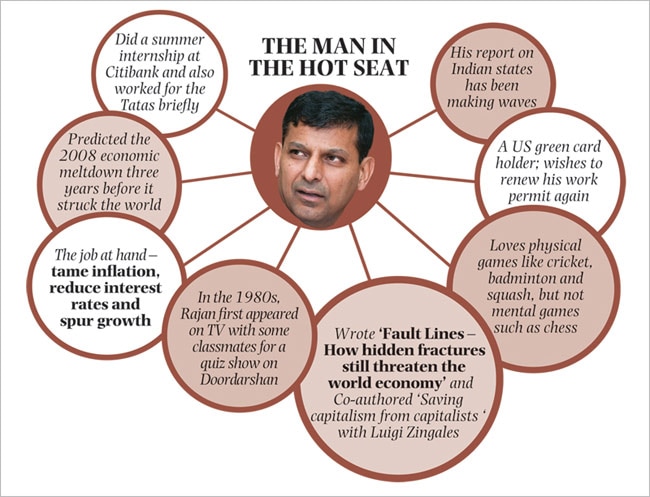 No doubt, Rajan, who used to be Chidambaram's chief economic advisor, has the government's confidence. But relations between the RBI and the government have often been fraught with tension. Benegal Rama Rau, the fourth RBI governor, resigned abruptly in January 1957 due to differences with the then finance minister T.T. Krishnamachari. Even Subbarao shared an uneasy relationship with the finance ministry. Last year, Chidambaram famously said he would "walk alone" to revive economic growth if the RBI didn't offer any support.

Expectations are high that Rajan will bridge the chasm between North Block, the seat of the finance ministry in New Delhi, and Mint Road, which houses the RBI in Mumbai. Rajan dismisses these chasm theories. He says the fact that Subbarao disagreed with his political masters shows the autonomy the central bank enjoys. Does that mean the RBI never listens to the finance ministry? "Of course not. You listen and accommodate [the government's views] where necessary. Where you think you are on a different path, you try and distance yourself or you try and convince the other," he says.

Inflation Hawk?
In his first two months in office, Rajan has asserted his independence. Although the government would have preferred a reduction in interest rates to boost the slowing economy, Rajan has instead raised the main lending rate twice to tame inflationary expectations. The repo rate, at which the RBI lends money to banks, now stands at 7.75 per cent from 7.25 per cent before he took over. Markets have branded him, like Subbarao, an inflation hawk. 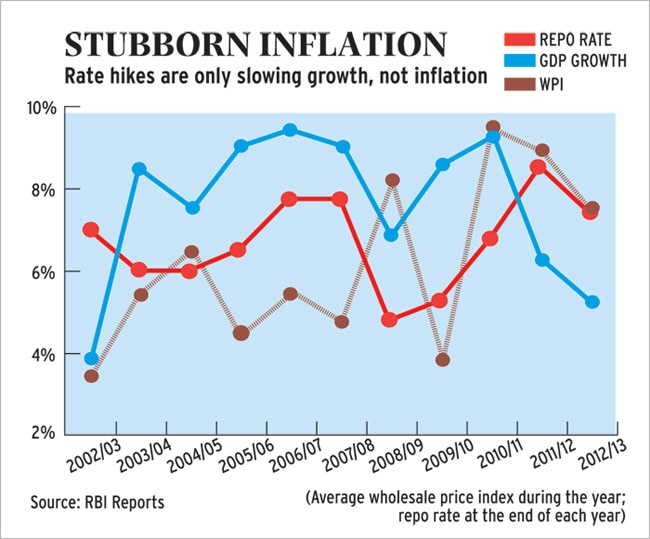 Subbarao increased the repo rate a record 13 times, from 4.75 per cent to 8.5 per cent, between March 2010 and October 2011. Inflation still remains high - headline inflation based on wholesale prices has averaged 8.6 per cent in the past three years (see Stubborn Inflation). And growth has slumped. The Indian economy expanded five per cent in 2012/13, the slowest pace in a decade. Rate hikes are, of course, not the only reason for slowing growth. Supply-side bottlenecks and the government's failure to take reform measures are responsible as well.

So, is Rajan really the inflation hawk he is made out to be? On leave from his tenure as professor of finance at the University of Chicago, Rajan believes low inflation is a prerequisite for long-term sustainable growth. The battle against inflation is not the RBI's alone, he emphasises. "This fight is for everybody. Not just us, not just the government, but also the private sector," says Rajan. "The common goal [of the RBI and the government] is growth with low inflation. But our view of the time frame in which we will achieve that and the necessities for that step can be different from that of the government."

Industry has criticised the rate hikes. "This [high inflation] is a supply-side issue and raising interest rates would hurt growth," says Chandrajit Banerjee, Director General at the Confederation of Indian Industry. But Rajan has plenty of supporters as well. "We had earlier attacked inflation more and kept liquidity tight. Rajan thinks both inflation and growth can be tackled simultaneously," says Vishwavir Ahuja, Managing Director and CEO at Ratnakar Bank. "That is a positive shift."

Chakravarthi Rangarajan, who also focused on price stability during his tenure as RBI governor in the 1990s, says there is always a dilemma between growth and inflation. "People were critical of me, but I broke inflation's back. I took the position that we have to increase interest rates," recalls Rangarajan, who now heads the Prime Minister's Economic Advisory Council.

Baptism by fire
Rajan, who at 50 is the second-youngest governor in the RBI's history (Prime Minister Manmohan Singh was the youngest), took over at a time when authorities were struggling to stabilise financial markets. The rupee was plunging to daily record lows against the dollar. Some even talked of the foreign exchange reserves crisis like the one India faced in 1991. Rajan's appointment itself had a soothing effect on the markets. Investors cheered the entry into the RBI of the former International Monetary Fund chief economist who famously predicted the 2008 economic meltdown three years earlier before it struck the world. "At the global level a lot of people have faith in him because he has interacted with them at the IMF," says Kaku Nakhate, India country head at Bank of America. "Big investors really talk to him."

Rajan took a number of steps to control the rupee's slide. At a time when foreign fund inflow had slowed down and the government was contemplating a sovereign bond issue, Rajan opened a swap window for deposits from non-resident Indians. The swap window has attracted $12 billion in just two months. He also allowed banks to borrow more overseas. These measures, along with easing worries of a US strike on Syria and the continuation of the US Federal Reserve's steps to revive its economy, have helped stabilise the rupee. The local currency is now trading around 61 to a dollar compared with the record low of 68.86 it touched on August 28.

Rajan is also normalising monetary policy operations by making the repo rate the most important tool to signal interest rates, moving away from levers such as the more expensive marginal standing facility (MSF). Before he took over at the RBI, the difference between the repo rate and the MSF, the rate at which banks borrow from the RBI as the last resort, had widened to 300 basis points. This had prompted large banks such as State Bank of India and ICICI Bank to increase their base lending rates, even though the repo rate was not increased. Rajan slashed the MSF rate in three phases and raised the repo rate, bringing the gap now to the normal level of 100 basis points. What industry needs in the short term, says YES Bank founder and CEO Rana Kapoor, is "confidence, conviction and communication" from the central bank. Glenn Maguire, Chief Economist for Asia Pacific at ANZ Economic Research, says Rajan has brought two powerful characteristics to the RBI - accessibility and transparency. "The simpler monetary policy approach aligned with these characteristics has been a key factor behind less market volatility, thus contributing to rupee stabilisation," says Maguire.

No Facebook 'likes'
A big task before Rajan is managing people's expectations. He knows some of his actions - like the recent rate hikes - will be unpopular. But he is undeterred. "The governorship of the central bank is not meant to win one votes or Facebook 'likes'," he said in his maiden speech. North Block mandarins say Rajan, who they describe as amiable and not very bureaucratic, has asked finance ministry officials to not speak publicly on his monetary policy, which is what primarily ruined Subbarao's tenure. So far, nobody from the government has commented on Rajan's two monetary policy reviews. 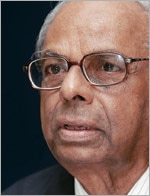 Banking sector reform is high on Rajan's priorities. He wants to issue new banking licences by January, though he had previously opposed the entry of large corporate houses into the banking sector. He is also looking to treat foreign banks on a par with Indian banks in terms of branch expansion. Ahuja of Ratnakar Bank says long before Rajan took over as RBI governor he had outlined the future architecture of banking in India. "Rajan has indicated the kind of banks that we must have - a few large Indian multinational banks, a few large Indian domestic banks and another set of banks that are closer to customers which can serve the underprivileged sections," says Ahuja.

The new job is replete with challenges. Rajan has to tread carefully on the issue of separating the RBI's monetary policy operations from its government debt management function. In October he faced opposition to his idea of allowing foreign banks to acquire local lenders. The topic is sensitive, as India hasn't seen many mergers even among local banks. Rajan says easing takeover rules is "a possibility", but the RBI will first examine how foreign banks perform over time and whether further privileges are warranted. 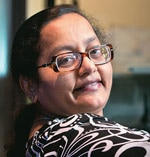 At the global level a lot of people have faith in him [Rajan] because he has interacted with them at the IMF: Kaku Nakhate, India country head, Bank of America

Rajan's growth report on Indian states, before he became the RBI chief, is also under criticism from regional parties. The report has put Maharashtra among the seven most developed states and Gujarat, home of the Bharatiya Janata Party's (BJP) prime ministerial candidate Narendra Modi, among the 11 less developed ones. Critics say being away from India for long could prove to be a big handicap for Rajan as he lacks adequate understanding of the political system. Rajan is quickly learning the ropes. He is brushing up his Hindi as well. Rajan's older sister, Jayashri Sridharan, who lives in Delhi, recollects how their parents had engaged a tutor to teach Hindi to their four children. "We used to run away at the sight of the tutor," she recalls with a smile.

In August, after Rajan was named the central bank's chief, senior BJP leader Murli Manohar Joshi questioned how a foreigner could be appointed as the RBI governor. Rajan, who holds a US green card, has dismissed such queries. "The green card does not require you to take a pledge of allegiance anywhere... It simply is a work permit which you need to have to work in another country," he asserted on October 29 after announcing the second-quarter monetary policy review. Will he be able to navigate the political landscape while keeping the RBI's autonomy intact? This will be keenly watched in his three-year tenure. Rajan would surely love to end his innings at the RBI with another Kipling poem, "The Secret of The Machines":

"But remember, please,
the Law by which we live,
We are not built to comprehend a lie,
We can neither love nor pity nor forgive,
If you make a slip in handling us you die!

Common goal of both govt and RBI is growth: Rajan