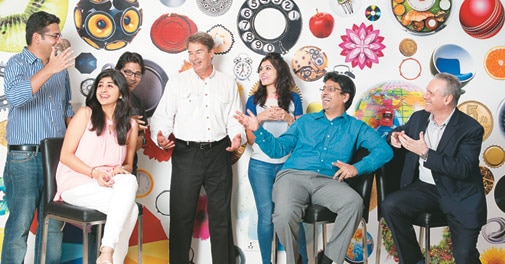 Best companies to work for in India 2013 survey rank: 9

When the country's largest private sector company, Reliance Industries Ltd (RIL), talked about transformation, people were pleasantly surprised. In June, at the Annual General Meeting, Chairman and Managing Director Mukesh Ambani had hinted at this while expounding his vision.

"Over the next three years, the commissioning of each of our large projects in petrochemicals and refining, strengthening of our retail business and launch of Jio will propel us closer to our aspiration of being a Fortune 50 company as we complete 40 years of our corporate journey," he had said. In achieving this objective, he sees people as the core of RIL's 'competitive advantage'. As part of this, a couple of months ago, says Prabir Jha, President and Chief HR Officer of RIL, the company announced a five-day week. "We were overwhelmed by the response," he says. More such moves on the people front are rapidly changing the image of this Rs 401,302 crore ($67 billion) company.

RIL has roped in its joint venture partner, British Petroleum (BP) PLC, to bring in some of the best practices. "The BP HR team is working with ours for a new performance and reward system, talent management practices, resourcing systems, and learning and leadership frameworks in various phases," says Jha. In fact, BP's HR head David Oxley has been camping at Reliance since September last year.

But still few people know much about RIL's work culture. The thought of serious men with work-helmets, of seasoned veterans, takes a back seat when one sees a young and buzzing workplace. "It is a place that surprises you with its cheer, friendly ambience and the state-of-the-art infrastructure," says R. Suresh, Managing Director, RGF Executive Search, a recruitment solutions provider.

The infrastructure bit, however, comes as no surprise. After all RIL has given India a world-class refinery at Jamnagar, Gujarat. "We dont really speak much about our caring work culture or even the opportunities in store," says Jha, an ex-bureaucrat, who joined RIL in December 2013.

The company has roped in Vikram Bector, earlier with Tata Motors, as Chief Talent Officer. RIL has also appointed Ashwani Dahiya as the Senior Vice President and Head of Performance and Rewards. He brings with him a decade of experience of working with American Express and was persuaded to move out of Singapore in May. "I get to be part of the leading company in India that aims to be part of the global Fortune 50. Look at the sheer number of people you will deal with here," says Dahiya. Handling the destiny of nearly 85,000 employees seems exciting indeed.

The company has also been tapping into top B-schools and had started the two-year Reliance Accelerated Leadership Programme (RALP) in 2012. "Having worked with the Bank of America-Merrill Lynch, I knew about RIL's operational excellence. It was exciting to get an opportunity to strategise and execute projects," says 28-year-old Atul Kumar, an IIM-Ahmedabad alumnus, who joined this May as Manager, Chairman's Office.

Kumar is already talking about work-life balance. "The enormity of the project's impact keeps you focused. But leaders here always guide you to structure it," he says.

Only those familiar with the company fully know the diversity out there. Michiel Brand from the Netherlands is a case in point. He joined in October 2013 as Global Book Leader for gasoline trading. His reluctance to shift base melted away when he saw the Jamnagar Refinery. "It was awe-inspiring. I have worked in this industry for over 25 years and this is the best," he says.

Ambani's interactions with people, too, is helping the company a lot. "The promoters are closely involved in the business and take swift decisions," says Brand. The pay and perks are also very enticing. "I am treated well. I have a house, a driver and a housekeeper. Geography doesn't matter," he says.

Coca-Cola has set a benchmark in grooming, mentoring staff