These are India's best B-schools of 2016

The 2016 edition of the BT-MDRA Best B-schools survey comes in the backdrop of renewed faith in traditional sectors such as consulting, FMCG, marketing and manufacturing, and offers deep insights.

Old favourites among employers continue to hold sway on B-school campuses. For a brief while, the exuberance of e-commerce and the tech sector start-ups had cornered the spotlight: they offered variety and excitement, and paid well, too, some of them offering starting salaries of more than Rs 20 lakh per year. While they remain in demand, there is an increasing air of caution among B-school graduates while looking at the opportunities they offer. In contrast, the traditional heavyweights - leading consultancy firms, banks, consumer goods companies, automobile manufacturers - continue to gain strength.

Consider the case of Siddharth Raman, 27, a student of the batch of 2014-16 at the Indian Institute of Management, Ahmedabad (IIM-A). Raman joined a global consultancy he prefers not to name. "I considered and evaluated a couple of offers - one from a start-up and the other from a product company," he says. "Eventually I chose the place I've joined because my larger goal was always to enter public policy through consulting."

Raman was lucky to have quickly got to where he had wanted. Some of the others from his school, who opted for e-commerce, had surprises and learnings in store. Flipkart, the leading Indian e-commerce player, for instance, recruited 250 people across various campuses, including 17 from IIM-A, but when it came to their actually joining in June, asked them to wait till December, offering them internships with the other start ups that Flipkart works with in the interim. Though unwilling to discuss individual companies, Ashish Nanda, Director, IIM-A, notes the unfairness of the move. "When a candidate says yes to a particular company, it means he or she has refused other offers and pulled out of the placement market," he says. "If circumstances change after a company has made offers, it should try and work with the institutions from which it has recruited, so that candidates feel they have been dealt with fairly." "It was a year which brought a little bit of learning for us - that some industries are more cyclical than others, so there is a risk associated with them"

Since then, all 17 have joined Flipkart or taken up alternative options the company offered them, but not before IIM-A's placement chairperson wrote to Flipkart. "It was a year which brought a little bit of learning for us - that some industries are more cyclical than others, so there is a risk associated with them," says Nanda. Nitin Seth, Chief Administrative Officer, Flipkart, admits there was a problem but maintains it has been overcome. "At the time the 250 were to come in, the company was undergoing a major restructuring exercise and was thus not ideally placed to offer learning opportunities to 250 people," he says. "If I had to do it again, I'd perhaps take 150 hires from campuses, while the remaining100 would be people already employed elsewhere who could be inducted in staggered fashion." But it has all ended well. "We reached out to 35-40 smaller start-ups which work with us to have these candidates onboard on paid internships," adds Seth. "Today, 90 per cent of them are set to join us."

There was learning from the experience for Flipkart too. "One learning relates to the way we plan for the future - the numbers we hire and the mix of those hires," says Seth. "The second relates to how we manage the process and communicate with stakeholders. In this case, perhaps we communicated more with the students directly and not enough with the institutes." Despite the hiccup, Flipkart remains among IIM-A's recruiting partners. But some other start-ups that failed to honour initial commitments have even been banned from recruiting at certain campuses, especially technical schools. There are other signs of distress at start-ups, which have shown up in this year's campus offers. At SP Jain Institute of Management and Research (SPJIMR), for instance, the share of offers from e-commerce fell to 10 per cent this year from 23 per cent in 2015, though the school says since it has an autumn placement season, students were able to get a sense of the market and overcome the problems that some others faced.

While the interest in start-ups continues with caution, companies in the traditionally attractive sectors have been reinventing themselves, which has made them even more attractive. They have adopted new technologies in a big way to gain consumer insights through new lenses, cater to consumer expectations and remain contemporary. "There is a huge amount of change happening in the financial technology space," says Nanda. "Companies are offering services involving cashless transactions. Lots of interesting things are happening around banking, such as dealing with non-performing assets in new ways, and bringing in superior banking management. Again, in consulting, while strategy consulting continues to be strong, there is now also operations consulting and technology consulting." 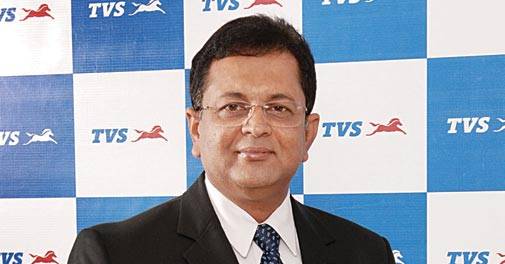 "Thanks to new technologies and our awareness of changing consumer preferences, many traditional methods of marketing and uses of technology are changing"

The same is true of the automobile sector. "Thanks to new technologies and our awareness of changing consumer preferences, many traditional methods of marketing and uses of technology are changing," says R. Anandakrishnan, Senior Vice President HR at two-wheeler giant TVS Motor Co. In consequence, hiring is going up. "Last year we hired 15 people from campuses, but this year it could be higher by 50 per cent. The rise is largely driven by business growth and new areas of expertise emerging in information technology and business analytics."

But even if there were no changes, the traditional sectors have their inherent advantages. "These are weather-proof and play-safe sectors where a candidate just starting out cannot go horribly wrong," says a seasoned HR executive who prefers not to be named. "Nowadays, no job is for life. Thus, for a candidate, having a Unilever or a Procter & Gamble on his CV at the starting point is not a bad idea at all." The offers from the traditionally sought after business have also grown this year - at SPJIMR, the share of consulting firms rose to 28 per cent from 17 per cent last year, while those from fast moving consumer goods (FMCG) companies went up to 23 per cent from 14 per cent.

This year, the Business Today-MDRA survey of the best B-schools has used only objective data for its ranking, unlike the last three years when the results of a perception survey and an experiential one had also been added. But whether one survey or three combined, the results as far as the top 10 ranks are concerned have not changed much - as before IIM-A is right on top, with IIM-Calcutta in second place. After a gap of three years IIM-Bangalore agreed to participate in the survey this time and finds place at No. 3. With IIM-B's entry, XLRI Jamshedpur and SP Jain Institute of Management and Research (SPJIMR), Mumbai, have fallen by one rank from last year - XLRI to No 4 and SPJIMR to No 5. If some reputed schools are missing from the list, it is only because they refused to participate or did not submit data on time. 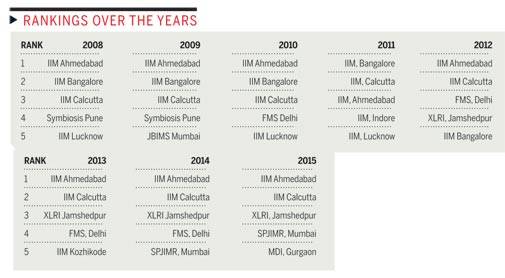 Here are also significant insights from the sub-text and parameters of the survey. A widespread concern is the future orientation of the schools, given that Indian companies are trying hard to establish themselves globally. On this parameter, IIM-C and XLRI have done even better than list-topper IIM-A. (See Future Orientation: Readying For Tomorrow, page 108.) Patterns of induction are also changing. "Instead of interviews on campuses, we have been moving towards internships leading to PPOs," says Anandakrishnan of TVS Motor.

Salaries offered at campus placements adhered to the trends of previous years - at SPJIMR, for instance, average salary for the outgoing batch was Rs 19.3 lakh per annum against Rs 18.2 lakh the previous year. In a batch of 226 students, 82 per cent were offered Rs 15 lakh or more per annum, with a median of Rs 17.38 lakh. At ISB, taking both its campuses at Hyderabad and Mohali - with a total of 812 students passing out in 2016 - the average cost to company (CTC) offered by domestic companies was Rs 22.58 lakh against Rs 19.12 lakh last year. (ISB eliminates the top and bottom 10 percentile offers from consideration while computing its average.) The institute had 297 companies participating in the placement offering 1,151 jobs against 987 last year. These included 180 offers from e-commerce companies.

Thus Siddharth Raman is not alone. Last year's experiences have refined choice for both job aspirants at B-schools and their potential recruiters. And, as for the e-commerce companies, they are hardly out of the reckoning. They remain buoyant, but at a realistic level, which is a good thing - too much buoyancy leads to bubbles.