Agriculture: Time to Add Value to the Agricultural Value Chain

D. Shivakumar, Chairman and CEO of PepsiCo India, writes about how to make commercial farming work in India.

The health of Indian agriculture will be a key determinant of a number of things over the next decade. It accounts for 15 per cent of the gross domestic product (GDP), and is growing at 2-4 per cent per annum. This sector lacks scale in landholding, employs 55 per cent of the workforce, is susceptible to nature's changes, has half the credit requirements coming from non-government sources, is still seeking technology inputs across the chain, and the next generation in rural India does not want to invest time in it.

India has done well to be self-sufficient in agriculture despite these challenges. The Indian agriculture story is about 50 years old, when India adopted technology with the use of high-yielding seeds. As a result, food production has been consistently ahead of population growth for the past 50 years, making us self-sufficient.

Today, we are among the top three producers of wheat, rice, pulses, sugar, tea, milk and fruits and vegetables. We are a large producer, but in terms of per-capita production or consumption or per-acre yields, we are not in the right league at the top. And, there is no silver bullet to solve the issue. 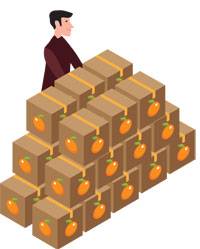 Our company is one of the largest buyers of agriculture produce in India and it has done a lot of extension work over 25 years in helping farmers. Today, over 65 per cent of Tropicana's requirement for fruit pulp is sourced entirely from the best of Indian orchards. Overall, we work with 24,000 farmers and have invested in their skilling, in technology upgradation, and in computer education for the future of their children.

Indian agriculture needs to move up the value chain if it has to benefit both the farmer and the consumer. We are seeing a demand for more processed foods from single income and double income families. We are seeing demand for health and wellness products from young and the old alike. We are seeing subtle but definite changes in diets and food habits. Nearly a fourth of our population skips breakfast and is looking for a different packaged answer to their time challenge. India's food mix will change this decade from pulses and grains to value-added dairy, fruits and vegetables. Fruits and vegetables is a ripe area for consideration to rethink Indian agriculture.

India is the number one producer for many fruits: banana, mango, lime, guava, papaya and pomegranate, and among the top five in several others. Yet, for many of these fruits, we do not have global scale processing facilities. In India, only four per cent of the fruits are processed compared to other benchmark countries, such as 23 per cent in China, 50 per cent in Indonesia and 70 per cent in Brazil. Citrus for example is a challenge. PepsiCo has in collaboration with a partner, set up a world-class processing facility located in the citrus-growing belt in Maharashtra.

Processed fruit in India is cost-uncompetitive compared to these markets despite high import duties. This is due to deep structural challenges and constraints across the value chain: poor farming practices, low-yield varietals and fragmented farms resulting in 35-50 per cent lower yields against global benchmarks. There are several inefficiencies that add to the end cost: intermediaries (15-30 per cent in costs), wastage in storage and transportation (20-35 per cent) and use of outdated technology with sub-scale processors.

Fruit provides far higher incomes to farmers and uses 40-80 per cent less water per hectare compared to cereals. Increasing the share of horticulture would have a meaningful impact on the livelihood of farmers and also help conserve water. There are several examples of countries having transformed their fruit industry to become global leaders in a short period of time. China took leadership in processed apple, growing from $50 million of export to $1.4 billion in just eight years. Thailand and Indonesia replicated similar success for pineapples and coconut, respectively.

Fruit provides far higher incomes to farmers (as much as 2-4 times of cereals and sugarcane) and uses 40-80 per cent less water per hectare compared to cereals. Increasing the share of horticulture would have a meaningful impact on the livelihood of farmers and also help conserve water.

There are several examples of countries having transformed their fruit industry to become global leaders in a short period of time. For instance, China took leadership in processed apple, growing from $50 million of export to $1.4 billion in just eight years. Thailand and Indonesia replicated similar success for pineapples and coconut, respectively. India can draw several lessons from these countries and replicate success.