News
Magazine
Cover Story
Ambuja cements makes up for the damage to the environment.

Ambuja cements makes up for the damage to the environment.

When you are the country's second-largest cement maker, you may feel compelled to make up for the damage to the environment.

First, limestone is dug out of hillsides and forests. The result: dust and a denuded landscape. It is then transported to a cement plant, where it is mixed with other materials, ground to a fine dust, and heated at 1,450 degrees centigrade. The lumpy result, known as clinker, is ground with gypsum to make ordinary Portland cement. The process takes up huge amounts of energy and water. Welcome to cement manufacturing.

When you are the country's second-largest cement maker, you may feel compelled to make up for the damage to the environment. That is what Ambuja Cements has been doing. The initiatives of its community development arm, Ambuja Cement Foundation, include livelihood programmes, healthcare, education, infrastructure, and women's empowerment. They span 770 villages in 11 states, and a population of more than 2 million.

"We start in the immediate vicinity of our plants, and then extend over a 100-kilometre radius," says Pearl Tiwari, Vice-President for Corporate Social Responsibility, or CSR. Chief Financial Officer Sanjiv Churiwala declined to talk to BT for this report, as he has been with the company for only three months, and the rating was based on the company's efforts in 2009/10. But the annual reports make it clear that Ambuja takes its CSR seriously. The foundation uses a social engagement scorecard to assess its initiatives. According to its 2010 annual report, scores in all locations ranged from 75 to 100 per cent. 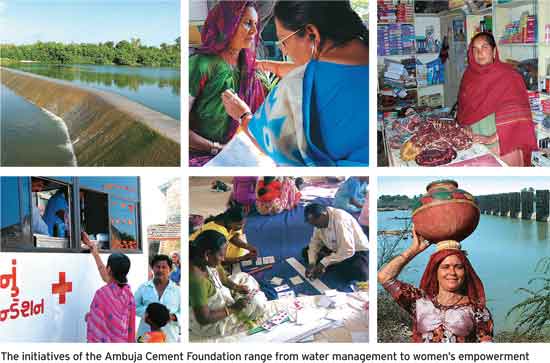 The foundation is setting up panels consisting of representatives of the company, the foundation and the community. These panels will coordinate engagement with all stakeholders, promote sustainable development and ensure synergy between initiatives.

But there is a caveat: YES Bank studied the numbers for 2009 (the company follows the calendar year for its accounts). In that year, Ambuja spent more than Rs 36 crore on CSR. In the following year, CSR spending shrank by 45 per cent to Rs 20.7 crore. The company's total income and profit after tax grew by 4.2 per cent and 3.7 per cent respectively in 2010.