Challenge was to change the mindset, culture: Anu Aga

The most difficult and yet the most important move was to change the mindset and the culture of the company, says the director and former Chairperson of Thermax.

Anu Aga, Director and former Chairperson, Thermax
In the late 1990s, Thermax had got used to what the late Sumantra Ghoshal called "satisfactory underperformance". In turning it around, the most difficult and yet the most important move was to change the mindset and the culture of the company. We had to move away from our comfort zone, stop blaming external circumstances for poor performance, and assume full responsibility. 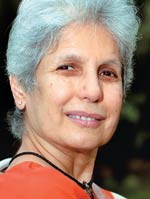 Anu Aga
The immediate trigger for the change was an anonymous letter I received from a shareholder blaming me for my inaction. I had thought that poor performance mainly affected me and my family, the majority shareholders. Suddenly, I realised that as a public limited company we had to protect the interests of the 40-odd per cent shareholders who had placed their faith in Thermax. I was convinced that our management was out of its depth and needed outside help. My senior executives resisted the idea. Most men find it difficult to seek help because I think it comes in the way of their 'macho image'. The board decided to hire a consulting company.

THE CASE
Revenues and profits had stagnated in the early 2000s
THE STRATEGY
Restructured Thermax into six core businesses. Brought in professional top management

Our turnaround focused on divesting non-core businesses. We restructured into six core businesses in the areas of energy and environment. By downsizing and improving our operational efficiency, we were able to bring down our employee cost from 16 per cent of turnover to less than 7.5 per cent, on a larger sales base. We also brought in a performance culture.

We reconstituted our board to bring in more independent directors. The promoter members stepped down from executive positions, and operational aspects were left to a nonfamily professional team led by the managing director.

After achieving a financial turnaround, we set an ambitious growth target. This programme - since then achieved by my successor and team - was based on operational excellence, a streamlined organisational structure, and rekindling innovation in a disciplined and systematic manner.

The author is Director and former Chairperson, Thermax