Consolidation, new leadership at top private banks and newer growth areas in retail are set to build the foundation for the banking industry. The 24th edition of BT-KPMG Best Bank Study celebrates the success of banking and fintech stars

The worst seems to be over for the Rs 166 lakh crore banking industry. The merger of 10 public sector banks into four large banks is expected to bring scale. De-risking by new leaders at large private banks, especially ICICI Bank and Axis Bank, is showing results. Asset quality deterioration has halted after almost seven years. Balance sheet clean-up is almost complete with banks focusing on strengthening CASA (current account savings account) base, NPA provisioning coverage and return on equity. Last, but not the least, Indian banking returned to profitability in the first half of FY20. This will gather steam as loan recoveries under the insolvency and bankruptcy code (IBC) pick up further.

The BT-KPMG Best Banks and Fintech study took a deep dive into financials of banks for FY19 when conditions were most challenging. But, like every year, it found several stars in the banking universe. HDFC Bank and SBI emerged as joint winners as the Bank of the Year. Kotak Mahindra Bank, which graduated from being a mid-sized bank last year, straightaway, secured a third place in the large bank category, only next to HDFC Bank and Axis Bank, in the quantitative study. 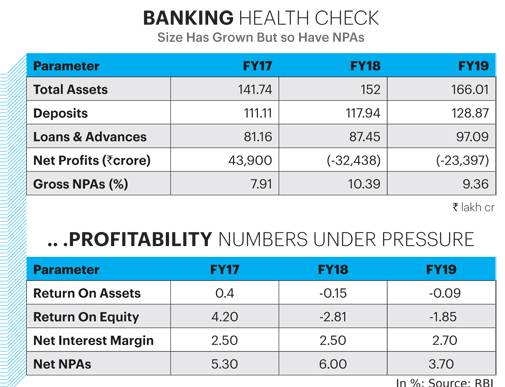 The ongoing consolidation, especially the new set of four large PSBs with assets of Rs 10-12 lakh crore each, will transform the competitive landscape. SBI is at Rs 36 lakh crore after merging five associate banks with itself. ICICI Bank and HDFC Bank are at around Rs 12 lakh crore.

Does this mean banking is becoming a big boys' club with seven large players? SBI Chairman Rajnish Kumar says banking in India will always have niche players serving different segments like what the new Small Finance Banks (SFBs) and Regional Rural Banks (RRBs) are doing. The seven large banks will bring more competition in retail loan products. "We could see a deposit war, especially in low-cost savings accounts and fixed deposits," says the CEO of a mid-sized bank. These large banks will also be in a better position to fund corporate requirements. "The mergers will weed out inefficiencies, bring economies of scale and help these banks compete and attract capital, which otherwise has been difficult for small banks," says Emkay Global Research.

Yuvraj Choudhary, a research analyst at Anand Rathi Securities, says integration of 10 PSBs into four is a good opportunity for SBI and private sector banks to gain market share in the short term. This is because managements of these PSBs will now spend a lot of time in areas such as technology integration, branch/people rationalisation, re-branding, redrawing of strategy and cultural and other merger issues. In the last decade, private sector banks have been quick to grab opportunities and so managed to double market share to 39 per cent in deposits and 34 per cent in advances. Can they sustain the trend in the next decade? They could, as they are getting their act together in spite of governance issues and some high-profile exits such as Chanda Kochhar (ICICI Bank), Shikha Sharma (Axis Bank) and Rana Kapoor (Yes Bank). The new leadership at these banks is stabilising things by preparing a new model that focuses on operating profits, risk-adjusted returns, right pricing of loan products, consumer banking and reducing exposure to long-gestation infrastructure projects. Uday Kotak , MD & CEO of Kotak Mahindra Bank, believes market share of private sector banks will settle at 50 per cent in the near future. Romesh Sobti, MD of IndusInd Bank, the winner in the mid-sized category, says any market share movement requires huge capital. "A 10 per cent shift in market share requires $10 billion capital," says Sobti. Private sector banks have the wherewithal to raise such money because of better performance, right product mix, lower NPAs and higher stock market valuations.

While the big boys of banking compete in large retail and corporate loans, new entities such as SFBs, Payments Banks and thousands of fintechs are creating a niche for themselves in micro loans, small payments and serving the under-banked. SFBs ended FY19 with advances of Rs 70,000 crore. Their universe is set to expand with the Reserve Bank of India (RBI) deciding to give SFB licences on tap. Bandhan Bank, the microfinance player turned full-scale bank, is also creating a niche away from the other urban focused full-scale banks.

At a policy level, with development of a new entrepreneurship/credit culture, there is a departure from the earlier approach of opening bank accounts. Fintechs, registered as non-banks, are also making their presence felt in payments, lending and value-added services. They and banks are working as partners, betting on digitisation, with data analytics, artificial intelligence and machine learning bringing enormous benefits.

"Is this a lull before the storm?" asks Sobti, who has had stints in all three banking formats (public, foreign and private) in his four-decade career. He says banks have to be on their toes and not become complacent as fintechs could strike back. "We have to go one step up to focus on innovation and differentiation by using new technological tools," says Sobti.

There is a huge regulatory support for the fintech community. The RBI recently announced a framework for regulatory sandbox which allows banks and fintechs to test new products before taking them to the market. "We need to focus on 21st century banking in which a lot of activity is currently taking place in digital banking," RBI Governor Shaktikanta Das said recently. In the BT-KPMG study of fintechs, Paymate, which helps small businesses in payments, emerged as a winner in the payments category. NeoGrowth, which uses PoS machine data to lend to retailers, attracted the attention of the jury in the lending category. Bangalore-based Perfios, whose 'statement analyzer' product is used by most banks in India, made it to the top for the second time in the last three years.

The banking industry is the backbone of the financial system as well as the economy. SBI Chairman Kumar recently said outstanding bank credit has to double from the current Rs 95 lakh crore in the next five years for India to achieve its $5 trillion GDP dream by 2025. Is this possible given the current slowdown and low credit offtake? Experts say credit growth has to average 15 per cent a year for the next five years if the target is to be met. The present growth rate is 8-10 per cent, mainly fuelled by retail loans, supported by the RBI move to cut interest rates and overnight surplus liquidity of Rs 3.5 lakh crore in the system. The RBI has also relaxed regulations to boost consumption. It has, for instance, exempted select retail segments from cash reserve ratio requirements. Similarly, it has reduced risk weights in certain retail products to ensure more lending by banks. The RBI has also relaxed certain rules governing NBFCs to push credit from banks. In addition, it has allowed one-time restructuring of loans to MSMEs for two years till March 2021.

However, apart from pushing retail credit, the government has to encourage private investments. In fact, there is a fear among PSBs that the burden of financing long gestation project will fall on them as private banks are remolding themselves as consumer banks. "One major change needed is banks financing long gestation projects till the execution stage and then other lenders buying it out or refinancing it," says the SBI Chairman.

The next decade won't be easy for banks as the economy is still to come out of the woods. Ashish Gupta, Head of Equity Research in India at Credit Suisse, recently said that the second wave of loan slippages was visible in the just concluded third quarter of FY20. "Slippages jumped to 1.5 per cent of loans as both corporate as well as non-corporate (SME and agri) saw an increase," says his report. New stress is developing in areas such as agri loans (because of farm loan waivers) Mudra loans (pushed by the government and unsecured), telecom (where adjusted gross revenue liability has created a situation of bankruptcy for one large player). The rising share of unsecured retail loans, especially personal loans and credit cards, is also a cause for concern.

Experts say size alone won't be a enough. PSBs will have to become faster in technology adoption. They also need governance reforms, overhaul of credit appraisal systems and more sector specialists. And both public and private sector banks need to work on governance framework.

While the leadership transition at large private banks has been smooth so far, the new leaders are yet to prove their mettle. They will have to operate in a regime where the RBI has capped CEO compensation, introduced penalties for NPA divergences and non-performance and introduced clauses for clawing back past bonuses. These changes will have far-reaching implications for the risk-taking ability of private bank CEOs.

Among the expected changes, say experts, private banks will come back to support companies if the opportunity comes back. "The difference this time will be that they will be wiser in assessing risk and pricing/structuring loans," says Emkay Global Research. At a large private bank, HDFC Bank, succession will be a keenly watched affair as even external candidates could be considered for the top job.

IndusInd Bank has chosen insider Sumant Kathpalia as the successor to Romesh Sobti. Lastly, the IBC has been a game changer for banking by instilling fear in minds of defaulters. Banks are expecting huge bad loan recoveries in the next two years. The banks, on their part, have to improve their investing skills to maximise value in defaulting companies. Clearly, only the fittest will survive the changes coming to the banking industry.