Larsen & Toubro success owes much to AM Naik's doggedness

When A.M. Naik started out, his odds of getting a job at L&T were low. But the company's success owes much to his doggedness.

WATCH: Exclusive interview with AM Naik on his plans for L&T
Naik joined L&T as Junior Engineer on March 15, 1965. As it turned out, the timing was fortuitous: it made him eligible for a promotion at the time of his confirmation in September of that year. He got a second promotion in April 1966. Thanks to a union agreement, he got an increment of Rs 75, bringing his salary up to Rs 1,025 a month. In 1963, he had told a friend: "One day, I will earn a four-figure salary." He never thought it would be so soon. 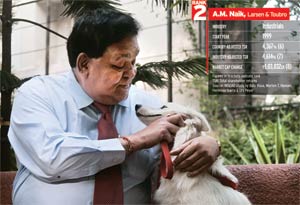