Y.C. Deveshwar thinks ITC could be a model for running India's PSUs

Yogi Deveshwar's crack team has converted every penalty corner into a goal.

Yogesh Chander Deveshwar thinks that ITC Ltd could be a model for running India's state-owned companies. That is because banks and public financial institutions hold about 35 per cent of ITC, and have been a strong counterfoil to British American Tobacco Plc, which owns 31 per cent and was trying hard to take full control of its Indian associate back when Deveshwar took the rudder.

The antagonism of the 1990s seems to be history. Back then, the Anglo-American giant wanted ITC to stick to cigarettes. "According to what they tell me now, they say that what has been done here is actually right for India," Deveshwar says. ITC ranks No.6 on the BT500 list, and Larsen & Toubro No.12, and both happen to be among India's largest 'board-managed' companies. Deveshwar is third on the list of the BT-INSEAD-HBR study on India's best CEOs between 1995 and 2011.

"I would say that companies like L&T and ITC can be the models for what the public sector can become tomorrow," he told BT in an exhaustive conversation in his wood-panelled office at the 1920s Virginia House in Kolkata.

WATCH: Exclusive interview with YC Deveshwar on his stint at ITC
"It has government shareholding, but not government control... And the ownership divorced from management. And widely held. So that those companies have priorities which are aligned to national priorities. But at the same time, they are highly efficient. And they don't get managed by transient people, like bureaucrats."

A Husain hangs behind Deveshwar's chair. He wears a Wills Lifestyle shirt, and within reach of his desk is a rack of Bingo potato chips - both ITC products. The mechanical engineer, born in Lahore just before Partition to a government employee, has spent his entire working life at the company once known as Imperial Tobacco, save for three years when he ducked out to run Air India. Last month he completed 16 years as Chairman of the conglomerate that makes everything from cigarettes and cookies to soap, incense sticks and paperboard. Next week he turns 65, and starts a new five-year term. That will lengthen his record as the country's longest-serving CEO. That is quite an achievement in India, where business is dominated by promoters and family shareholdings.

Deveshwar does own 3.4 million shares of ITC as of December 31, but at least his name is not eponymous with his company's. He has risen through the ranks, and he has bucked many trends. He did enjoy a 'runway effect', as the authors of the BT-INSEAD-HBR study put it, when he took over a company in crisis, but he did not come armed with an MBA. "I may not have been a business graduate, but the opportunity I got very early on in ITC actually grew me," he says. "I would say that since I was not an MBA, I began on the shop floor, from under the machines. So I have started from running shifts. And started running with holding the toolbox with the fitters. So it gave me a much closer feel for the grass roots of the organisation. Then I got very quick breaks."

Every successful manager, however talented, has to have had a lucky first break. Deveshwar's came within four years of his start in 1968, when he was picked up by Ajit Narain Haksar, the first Indian Chairman of the company, as an MBO (management by objectives) adviser. "That really opened up the mind," he says. 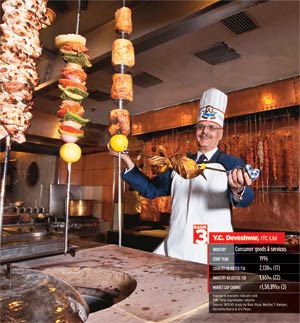 Click here to Enlarge
It also yielded a template for success. At 44, when he went away to head Air India, he had already run three ITC divisions (he had won an ITC board slot at the age of 37). The state airline gave him a good taste of the outside world. Air India taught him that management principles are the same for all organisations. It also taught him that the government should never run services.

When it comes to management boards, Deveshwar is blessed by a bespoke one. Five of ITC's 12 nonexecutive directors - Anil Baijal, S.B. Mathur, D.K. Mehrotra, P.B. Ramanujam, and Basudeb Sen - moved from being nominees of government financial institutions to independent directorships. B. Vijayaraghavan, 76, has been a nonexecutive director since 1996.

Deveshwar bristles at the notion that long-serving directors are not the best model of corporate governance. "That is why the world is in this mess," he says. "Because everybody is thinking of quarterly-quarterly thinking. And nobody is thinking 10-15-20 years… Definition of independent must not mean you should be disinterested. That you should have no skin in the game. That you should be totally risk-averse. Because you have no interest in value creation… You don't become honest or dishonest by time dimensions."

Is Deveshwar not worried that he is going to leave shoes that are too big to be filled when he finally calls it a day? He says the nominations committee asked him to stay on for another five years "because they felt that we are in mid-stream… At this time, it requires continuity, stability and consolidation, and it requires grooming of people".

Likening his organisation to a football team, he says: "I started as a centre-half, because in a situation of crisis… there were so many fires that you have to take the hose in your hand and run around and put out the fire and at the same time start constructing. Now I am like a referee. Now I whistle."

So he does not think directors should have fixed terms? "By rule books you don't get governance," he scoffs. "Governance is a matter of vision, values and vitality." He points out that ITC has 13 chief executives running different businesses, and there is a high degree of internal entrepreneurship, the kind that buys 18 kinds of wheat and makes customised flour for different regional taste-buds to create India's best-selling brand.

One of those managers will, probably around 2017, get to live on the fourth floor of Fountain Court, the discreet and classy compound a pebble's throwaway from the headquarter building where the CEO lives, atop his most senior executives. Deveshwar does not think emotion should play a role in that person's selection, but he cannot help sounding a wee bit like a promoter himself when he talks about leaving his legacy in safe hands. "My conscience should be clear," he says. "My grandchildren, when they grow up, they should be able to get employment in ITC. And not that this company has disappeared."