R. Sridhar has created an ecosystem for commercial vehicle finance

Over a decade, Shriram Transport Finance's R. Sridhar has created an ecosystem for commercial vehicle finance.

Financing truck purchases may not be what aspiring entrepreneurs have always dreamed of. But R. Sridhar, the 53-year-old Managing Director of Shriram Transport Finance Company, or STFC, has given it appeal by building a large, profitable company with innovative and aggressive business models.

The numbers are impressive. When Sridhar took over as Managing Director in 2005, STFC was a medium sized non-banking finance company, or NBFC, with assets of Rs 5,000 crore, a net profit of Rs 50 crore, and a market capitalisation of Rs 500 crore. Today, it is the largest asset financing NBFC in India, with an asset book of Rs 18,000 crore, profits of Rs 1,230 crore and a Rs 36,000-crore market capitalisation. In fact, Sridhar is No. 1 on both country-adjusted and industry-adjusted total shareholder returns in the BT-INSEAD-HBR Best CEOs ranking. He is preparing to take up greater responsibility from April at Shriram Capital, the holding company of the Chennaibased Shriram Group. 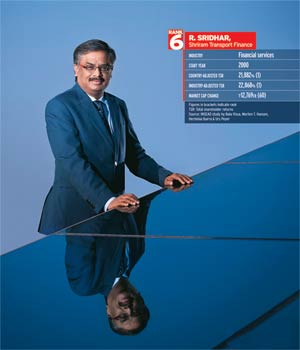 Click here to Enlarge
It was a crisis that brought out the best in the soft-spoken, jovial Sridhar, a chartered accountant raised in Chennai. In 1998, the NBFC sector was reeling after CRB Capital Markets and a few other finance companies collapsed, leaving thousands of investors in the lurch. Reserve Bank of India's knee-jerk reaction - tightening regulation by imposing prudential and capital adequacy norms - saw more investors foreclosing deposits, triggering a massive asset-liability mismatch in the sector. Thousands of NBFCs went out of business. Many expected the Shriram group to fail, too. Group companies, including STFC, depended on public deposits and risk-averse Indian banks for funds.

Sridhar was then President of STFC, which handled the group's truck funding operations in western India. "We had a good business model on the assets side - lending to small truck owners," he says. "The problem was on the liability side, which is the funding support." So he drew up a portfolio management plan.

MUST READ: 'Relationship-based model behind our success' |
WATCH: Exclusive interview with R Sridhar
"We had the capacity to lend to and collect repayments from a niche segment - small truck operators," he says. Some borrowers were onetruck operations. The banking system largely ignored them for lack of due diligence and collateral, but banks were keen on it as truck purchases was priority-sector lending. "In the portfolio management plan, the money came from banks, while STFC did the business for a fee," says Sridhar. STFC shifted from a fund-based business model to a fee-based one.

Citicorp Finance, the NBFC arm of Citibank, was looking to deepen lending operations in India at the time, and liked the concept. It began to fund vehicle purchases with STFC. UTI Bank (now Axis Bank) followed suit. In three years, portfolio sales to the two banks crossed Rs 5,000 crore.

Sridhar's second innovation came in 2000. STFC began securitising its asset portfolio of old vehicles, and sold assets worth Rs 100 crore to Citibank. This opened another revenue stream for STFC. "At that time, portfolio management and securitisation were both aggressive strategies, which Sridhar resorted to for continuous finance to fuel STFC's growth," says G.S. Sundararajan, who was then Managing Director of Citibank's small and medium enterprises business, and is now Managing Director, Shriram Capital.

"As banks were unwilling to lend, this was critical for the company's survival and growth." In 2002, Citicorp invested Rs 17 crore for a 15 per cent stake in STFC and another group company, Shriram Investments. "The Citicorp investment gave us credibility, and the model began to get noticed," says Sridhar. In 2004, UTI Bank picked up a stake. Soon, private equity players were knocking on the doors of STFC and other group companies.

ChrysCapital's Rs 100-crore investment in the Shriram group's trucking business in February 2005 was the start of a lasting relationship with private equity players. ChrysCapital's only pre-condition was that the Shriram group merge all truck-financing companies into STFC. Sridhar was reappointed CEO of the merged entity. In 2006, global private equity firm TPG Capital then invested close to Rs 600 crore in it, and recent reports suggest that it may sell its STFC stake in the next few months for around Rs 3,000 crore.

In 2006, STFC ended its tie-ups with Citicorp and UTI Bank, and began to fund truck lending on its own. "The risk mindset had also changed," says Sridhar. Armed with copious funds, STFC grew from a truck finance company into one that financed commercial vehicle purchases. It began to meet the working capital needs of truckers, too.

Sridhar's innovative strategies gave STFC the stability it needed, and enabled the group to diversify into insurance and consumer finance. The company is awaiting banking licence guidelines. Sridhar's elevation to the holding company seems in line with the planned banking venture, but he refuses to confirm it. All he says is that as a Carnatic music buff - he has recordings of more than 4,000 concerts - he looks forward to enjoying Chennai's annual music festival after a gap of 26 years.