The year was 1985. Big bang reforms had not yet set in. Giant public sector enterprises were driving the economy. The private sector, enmeshed in controls, had little freedom to decide on product type, quantity or mix. Government officials decided it all. So when young Prime Minister Rajiv Gandhi eased the rules a bit and allowed private industries to tweak their product mix within the approved quantity, it was hailed as a significant policy leap.

A leap that would prove game changing for Titan Industries, then a tiny start-up yet to launch its first watch. The policy change meant the company could decide for itself the proportion of mechanical and quartz watches in its output. 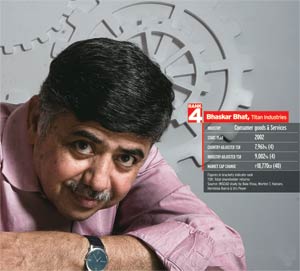 Click here to Enlarge
It was Titan Industries' moment of epiphany. The company, established in 1984 as a joint venture between the Tata Group and Tamil Nadu Industrial Development Corporation, then functioned out of a small room at the Taj West End in Bangalore. Led by Tata Group stalwart Xerxes Sapur Desai, Titan decided to manufacture only quartz watches for a market that was dominated by mechanical watches. "That was a momentous decision for the company," says Bhaskar Bhat, current Managing Director and a founding member of Titan Industries. "We released our first watch in 1987."

WATCH: Exclusive interview with Bhaskar Bhat
Titan's decision, and the positive consumer response, pushed erstwhile market leader HMT Watches, a public sector company, into gradual decline. Bhat, though, modestly says Titan moved at its regular pace as the opportunities unfolded. Today, Titan commands more than 60 per cent share of the domestic organised watch industry, having sold 14 million watches in 2010/11, up from 6 million in 2002/03.

Having started with watches, the company diversified into jewellery in 1990 and eyewear in 2007. Currently, Titan owns 737 outlets in India across all its brands and more than 1,600 outlets in other countries, including Africa, West and South-East Asia. It also sells its products through more than 11,000 multi-brand outlets in India.

The 57-year-old Mumbai-born Bhat, with roots in Mangalore, has taken his company miles ahead of the position it occupied when his mentor, Desai left in March 2002. Titan's revenues have rocketed from Rs 798 crore in 2002/03 to Rs 6,571 crore in 2010/11, making it the fifthlargest company in the $75-billion Tata conglomerate by market cap. In the same period, its operating profit rose from Rs 9.38 crore to Rs 542.92 crore, and net profit, from Rs 6.21 crore to Rs 430.41 crore. Indeed, Titan is sitting on a cash pile of Rs 1,000 crore. Much of Titan's growth, according to independent director C.G. Krishnadas Nair, is due to Bhat's strategic thinking and planning ahead of time. "He is a role model CEO. He listens to ideas,'' says Nair, who was till recently Managing Director of Cochin International Airport.

Ace investor Rakesh Jhunjhunwala's words during a recent interview sum up the market sentiment about the company. "I wish I could find the next Titan, but I do not see any on the horizon at the moment," said Jhunjhunwala, who holds nine per cent stake in the firm. Watches might be Titan's most well-known product, but it is jewellery, in the form of the Tanishq brand, that earns it the most revenue.

In 2010/11, watches earned Rs 1,266 crore, while jewellery brought in Rs 5,027 crore. Widely recognised for revolutionising jewellery design in India, Tanishq created an astonishing 14,330 new designs for customers in 2011 - compared to 5,612 in 2002/03. No wonder Tanishq is the largest player in India's Rs 7,000-crore branded jewellery market, handling around 18 tonnes of gold a year.

Despite jewellery's success, Bhat holds watches closest to his heart. The IIT Madras-IIM Ahmedabad alumnus explains: "A watch is very complex to make, and is perhaps the only thing that has to work 24 hours, like the human heart. Yet, the look and feel of a watch are what make people buy it." Today, Titan watches touch all income groups and are available for as little as Rs 300.

Bhat's team is constantly assessing emerging consumer trends to unveil new products. "Titan's strategy involves preparing for the upgrade of consumer aspirations across its watch, jewellery and optics divisions. We believe this is a bold strategy catering to the top end as well as other segments of the consumer market," says an October 2011 note by UBS Securities. The ever-hungry Bhat now wants revenues of Rs 14,000 crore by 2014/15.

However, his target will be put to test from different quarters - high costs of captive manufacturing, volatile real estate prices, competition from the unorganised sector in all segments. But investors would hope Bhat will be up to meeting the challenges.

One of the most admired CEOs in the Tata Group, Bhat travels out of Bangalore at least twice a week and, surprisingly, prefers public buses to commute to and from the airport. "Buses are better, safer and convenient, and you have one every ten minutes from Mekhri Circle (in Bangalore)," he says.

Such prudence, from a man who took home more than Rs 2.5 crore in 2011 - including salary, perks and commission - augurs well for Titan Industries as it prepares for the difficult times ahead.