Infrastructure creation is doubtlessly being touted as the balm of salvation for our metropolises, but what if it becomes unviable to use those fancy expressways, viaducts, flyovers and suspension bridges?

Picture this: BY 2020, Mumbai and its extended suburbs are a dizzying maze of flyovers and expressways that go on and on. Entwined around skyscrapers whose terraces hang hidden in the clouds, the concrete jungle may not be pretty, but it never fails to elicit gasps dripping with awe from the thousands of immigrants who (still) troop into the country’s financial capital every day. Visitors to the megacity can’t help but marvel at the smooth and orderly flow of traffic through the labyrinths of sixand eight-lane roads and ramps that start at Colaba in the south, snake over the Arabian sea, and end some 100 km off Greater Mumbai limits, well into what was a rural, agrarian Konkan pasture only a decade ago. 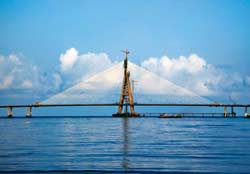 Mumbai tops again
If the traffic’s moving smoothly, it’s not just because of the countless wide and runway-like roads that meander across the Mumbai landscape, almost like random strokes of a painter’s brush. The traffic’s humming without a glitch also because there isn’t much of it on the road. That’s because few are keen to drive their cars out on these endless tarmacs of immaculately laid-out thoroughfares.

Few are keen to drive because few are willing to shell out a small fortune for petrol and diesel. Crude oil, the commodity whose supply woefully outstrips demand in 2020, has crossed $300 a barrel, and is still rising. Electric trains, buses and even the humble cycle have become the average Mumbaikars’ vehicles of preference. Click here to Enlarge
And thank heavens somebody had the good sense to build those elevated sky walks, which ensure that walking in the midst of steel and cement is still a pleasure. Sounds like one of Nostradamus’ doomsday prophecies? Perhaps, but it’s an eventuality worth losing a few days sleep over.

After all, when much of the initial phase of infrastructure creation began a few years ago (or some 15 years before 2020), oil prices were ensconced in the sub-$30 per barrel region. If there was a scramble to make the big cities a moveable feast with flyovers, it was on the assumption that affordability of fuel wouldn’t become an issue.

Hindsight is, of course, a wonderful thing, but then that’s why foresight, though rarer, is brilliant. What if spiralling oil prices—coupled with ancillary inflationary pressures around consumers— makes driving a luxury that’s increasingly elusive, and the wonderful flyovers and expressways just shortsighted marvels of fanciful engineering? 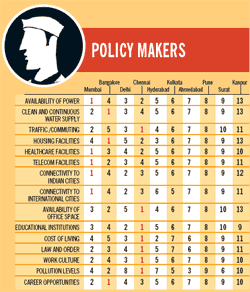 Click here to Enlarge
One could argue that infrastructure creation is a necessity, and the US has progressed as far as they have on the back of a frenetic buildup of road connectivity. True, but the only difference is that when such construction activity was under way in the West, supply of oil outstripped the demand for it. Unlike the situation today.

It’s against such a backdrop that Business Today’s Best Cities for Business may not remain that way for too long. They just can’t. By 2020, perhaps it will be time for a few newly-created special economic zones (SEZs)—a la Shenzhen and Pudong in China, although that may not be a model that is to be followed blindly, either—to creep up on the Best Cities list, along with a few names that are neglected rural outposts today. In fact, with Mumbai clambering to the top of the list with almost mindless monotony, the Best Cities for Business makes lesser and lesser sense year after year. Till the stock exchanges, banks, financial institutions and headquarters of India’s biggest corporations continue to reside in Mumbai, few businesses worth their balance sheets would consider venturing away from the commercial capital; never mind that it’s rotting at the seams. If someone can create such alternatives from scratch, one has a substitute to Mumbai. It does, indeed, make more sense to build mint-new cities than to improve connectivity to the decaying ones. Here are some of the top business cities

Despite negative perceptions about law and order and poor infrastructure, two cities from Uttar Pradesh—Kanpur and Lucknow—rise buoyed by positive consumer and investor sentiment. Do they denote a glimmer of hope for the rest of UP?

Its infrastructure may be creaking at the seams, but a slew of recent improvements have ensured that India’s ‘Silicon Valley’ is back among the top cities.

Mumbai: The sun hasn’t set, not yet

Mumbai might be the maximum city with most people surveyed voting for it as the best city to do business in, but it’s among the toughest cities to live in.