Changing work culture, transformed lifestyles and rise of the services industry make ‘life after work’ as important as ‘life at work’. Chronicling this trend for the first time, BT’s ranking of best cities shows some big changes.

What makes a city a destination of choice for today’s urban worker? Most people living, working and playing in today’s fast-paced corporate environment are desperate for a sound business infrastructure that includes good opportunities for jobs, quick and efficient ways to travel to work and good credit for entrepreneurial opportunities. But when the sun sets, and it’s time to unwind, today’s worker also craves decent watering holes, multiplexes to watch the latest Bond movie, and for the overly energetic, a club to dance the night away. That’s not all though. Today’s urban worker expects a safe civic environment—especially for women— good hospitals, schools and parks, and the one thing that Indians constantly pray for—but seldom get—namely, regular power supply. 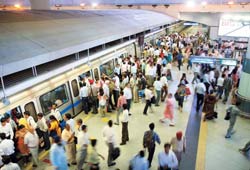 Delhi dropped ranks in our relative rankings despite improved intrastructure
Which is why, this year, Business Today’s Best Cities Survey divvies up cities on the basis of how they stack up in ‘Life at Work’ as well as ‘Life after Work’. Often, cities scoring high in one index have fared rather averagely on the other. A case in point is Gurgaon, which is not just the top ranked city in the ‘Life at Work’ category but also the overall best city to live and work in. Yet, it scores a distant 11th in the ‘Life after Work’ index—not because of a lack of malls, restaurants or movie theatres of which it has plenty—but because of its shoddy roads and inconsistent power supply.

This year’s survey, besides having a larger base of respondents—6,000 spread across 50 cities—has ranked cities relative to each other rather than in absolute terms which is a more fair assessment of how cities size up against each other across different variables. So, while Delhi’s improved infrastructure should see it jumping ranks vis-à-vis last year, the fact that other cities have evolved on other parameters at a faster pace means that India’s political power centre has actually seen its ranking drop. Ditto for Mumbai, which, if one goes by popular perception of its passenger-bursting local trains and traffic-choked roads, should probably be a candidate for the worst city, but because of its sheer strength in terms of wealth creation, job opportunities, per capita income and safety, especially of women, is ranked higher than Delhi.

Rise of suburbia
Gurgaon’s top ranking, of course, is indicative of a new trend —the rise of the suburb and tier II cities. Mumbai, in fact, is the only mega-city to feature in the top five, and that too barely. “The driver for the overall shift was the real estate cost, which spiralled exponentially in the metros, necessitating the development of the suburbs where asset prices were still under control,” says Anshul Jain, CEO, DTZ International Property Advisers, by way of explanation. He should know. DTZ itself moved out from Delhi’s Nehru Place commercial centre to Gurgaon citing proximity to clients. In fact, high real estate costs fuel inflationary trends in the other major company expense, namely human resources, as a higher cost of living demands higher compensation packages. 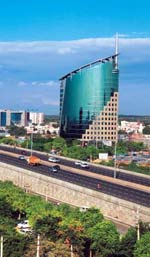 Gurgaon leads the suburban charge
Sure, Gurgaon’s infrastructure doesn’t quite live up to the city’s global aspirations as anyone caught in its traffic pile-up will vouch for. And yet, the city’s employment growth rate is second only to Noida’s—another Delhi suburb—while it boasts of the third highest per capita income after Chandigarh and Mumbai, at Rs 1,22,212.

“What counts in favour of the secondary cities is the availability of good accommodation and office space, daily conveniences and a support system for working professionals— for instance, availability of domestic help,” points out Nakul Anand, Divisional Chief Executive, Hotels, ITC, headquartered in Gurgaon. He adds though, that much of the comparison between cities is relative to a specific reference in time, having lived in Bangalore during its pre-IT boom period as well as Chennai.

The ascent of second tier cities to the top of the heap is also prompting India Inc to re-engineer its growth strategies. “When we did our feasibility study, we found that infrastructure in the tier II cities was growing faster than the metropolitan cities, for which foreign funding was also easier to obtain. Additionally, the colleges in the cities serve our HR requirements readily as most people like to work closer to home,” informs Ashok Khanna, Managing Director, IHHR Hospitality, promoters of Ananda Spas. IHHR’s recent venture, Ista, a chain of five-star hotels, is targeting secondary cities like Amritsar, Pune, Ahmedabad and Coimbatore, after initially opening in Bangalore and Hyderabad. Bangalore is no longer one of the best places after work
Sure, average room revenues would take a knock compared to what it could earn in a tier I city, admits Khanna—but the difference, he says, is hardly more than 10 per cent. It’s also pure business economics that has made Chandigarh-based software firm Safaltek Software focus its energies on tier II urban centres.

“Compared to a metropolitan or a tier I city, our costs for running an operation in a tier II city such as Ahmedabad or Jaipur are 30-40 per cent lower—which allows us a lot of leeway in margin play,” discloses Rohit Garg, Director, Safaltek Software. In fact, the company, which has just bought over a small R&D unit in Delhi, says its per seat cost in the national capital is 20 per cent higher when compared to Chandigarh.

Metros down, but not discounted
It’s all very well to tout the achievements of suburbia, but would a Rajarhat survive without a Kolkata, a Navi Mumbai without Mumbai, Whitefield and Electronics City without Bangalore or Gurgaon and Noida without Delhi?

“In the present shape and form, the answer is no— the suburbs can’t exist without the parent city,” observes Jain of DTZ. Harish Bijoor, CEO, Harish Bijoor Consults, says the brand equity of the mega-cities has been centuries in the making. “These cities can’t be discounted simply due to the kind of wealth they are able to generate. It’s not just about the geography but also the history and sociology that sustain a city’s importance as a brand,” says Bijoor.

Each of the mega-cities, he adds, has a traditional equity that has come to define the city. “Mumbai, for instance, is all about the stock markets and the world of finance while Delhi immediately conjures up the image of being a centre of real estate and the country’s powerbrokers and bureaucrats,” he elaborates. Findings from the survey corroborate Jain and Bijoor’s views. Despite the pressures of a groaning infrastructure, Mumbai, Bangalore and Chennai still manage to figure in the top 10 cities to live and work, though Delhi has slipped to 13.

According to Bijoor, newer cities and suburbia call for greater spending, thus becoming spend-magnets while the parent cities assume the role of earn-magnets. “Megacities need a separate governance structure—a Mumbai currently is part of Maharashtra and as such may not get the kind of priority it deserves. Making it a Union Territory would probably help,” he advises.

However, noted architect Gautam Bhatia strikes a tangentially discordant note. “As the suburbs are growing faster, they will attain independence and become autonomous, thus minimising the importance of the parent city. Still, I don’t foresee these suburban centres and tier II cities developing a character of their own,” he says. Bhatia goes a step further, advocating a complete overhaul of a city’s zoning concepts to make them more livable. “We need to rethink our zoning parameters of keeping the residential, commercial and recreational areas segregated from each other by huge distances—the best quality of life is enjoyed in those places where dwellers can walk to work, shop and entertain from their place of residence,” he says.

Yes, there is life after work
“With the amount of time we hoteliers spend on the job, all we want to do after work is to catch up with family and sleep,” quips Anand of ITC Hotels, whose average working day could see him spending over 15 hours on the job. But while Anand may jocularly dismiss the concept and priority of life after work as a determinant in choosing a work place, others, especially people who have just started their corporate journey, are not quite as domesticated. In fact, companies readily admit that recruiting outstation talent is easier if there are clear avenues for letting your hair down after slaving away at the office all day.

“Agreed, it’s probably easier to convince someone to shift to Mumbai, Delhi or Bangalore than to Kolkata but things have certainly improved over the last five years and the new suburbs like Rajarhat are attracting talent,” asserts Kolkata-based Sanjiv Goenka, Vice Chairman, RPG Group.

Besides, he adds, the city is usually seen as a posting for a few years before people move on to other pastures. At a senior managerial level, says Goenka, after work hours are usually spent with family with the occasional outing to a club—of which there are plenty in the city—or to a restaurant. Both Anand and Goenka say that in their years of experience of recruiting talent, they have rarely come across a candidate who evaluated a job posting on the basis of options available for life after work—which could be more of a reflection of the industries they work in rather than the cities. Technology allows for a seamless blending of work and play
Of course, it is well documented that the entire idea of there actually being life beyond work originated when there was a need to cater to the demands of the nerd force which fuelled India’s tech boom. Bangalore, India’s wannabe version of Silicon Valley, became a pub crawler’s paradise. Ditto for the hordes working at Gurgaon’s BPOs, whose presence prompted the opening of several bars for the young and restless. “It’s a no-brainer that the young, especially the upwardly mobile, want to enjoy their money after work. That also led to creation of the weekend getaway concept as many of these people worked a five-day week rather than a six-day, as was the norm about 10-15 years back,” observes Jain of DTZ.

But it’s not just entertainment options that make a city a great place for life after work. Parameters such as a livability quotient—which includes a support system for working professionals, a clean environment, a low crime rate, good education and a high literacy rate—are increasingly asserting their weightage in city rankings. This has in turn prompted talent to evaluate work-place options which may be far from one’s place of birth. “We get applications from people from as far down south as Bangalore who are willing to relocate to Chandigarh for not just work but to settle down here,” reveals Puneet Vatsayan, Co-Founder, Mobera Systems, a boutique software firm in Chandigarh. In fact, Vatsayan says that having benchmarked their salaries to the compensation levels in Delhi and Bangalore, he has ensured that attrition is almost nil at his company. That, as Vatsayan jests, is a double edged sword. “I pray some people leave, so that fresh blood can come in, but these guys just stick on,” he remarks, half in jest.

Ultimately, for a city to make it on to a list such as ours, it increasingly needs to have world class business facilities and infrastructure. It also needs to cater to the after work desires of a population that is getting younger by the day. The city that is able to do both best—and there are a few on our list—will be the city that will continue to grow and prosper, attracting the best of companies and the brightest of talent.