Tulasi Seeds believes in giving back to society and funds the education of the needy.

Tulasi Ramachandra Prabhu, Chairman, Tulasi Seeds <em>Photo: H. K. Rajashekar/www.indiatodayimages.com</em>
N. Madhavan
The letter shocked Tulasi Ramachandra Prabhu. It was 1970 and the 23-yearold had just completed his B. Tech from IIT Madras. He had practically been selected by Bharat Heavy Electricals Ltd, and expected to join its Trichy office. He had completed the medical tests - a mere formality, he thought - and was awaiting a final okay.

"As you are suffering from Red-Green eye defect you are not eligible for a technical post and hence do not qualify for a job at BHEL," the letter stated. It was only thus that Prabhu learnt he was colour blind - he could not distinguish between red and green.

Ironically, it is on account of his colour blindness that, forced to turn entrepreneur, he has been able to add colour to the lives of 1,200 people - his employees - as well as 6,500 students whose college and university education he has been funding every year for more than a decade now. 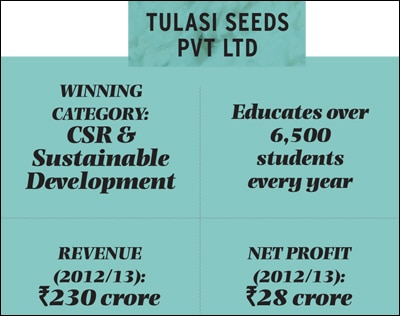 But entrepreneurial spirit, kindled by the BHEL rejection, was not enough. Funds too were needed. Hailing from a lower middle class agricultural family - Prabhu studied on scholarships - these were hard to come by. Finally, in 1977, taking advantage of the Andhra Pradesh government's favourable policies, he managed to start a small scale unit, manufacturing corrugated card boxes. He never looked back. The unit began making profits from the first month. Prabhu expanded the capacity by four times in 1984.

By 1991, Prabhu owned a well-irrigated, 10-acre farm as well. That year he got another shock - the farm's cotton yield dropped dramatically to just three quintals per acre from 18 quintals earlier. He realised this was due to poor quality and spurious seeds, and the following year ventured into the seeds business. "I saw an opportunity. India, a predominantly agricultural country, desperately needs quality seeds," he says.

Tulasi Seeds began by procuring a hybrid from the Cotton Research Station in Coimbatore. But it soon dawned on Prabhu that the business could not survive on borrowed hybrids and he would have to invest in research to develop his own hybrids. He employed 10 scientists, set up greenhouses and laboratories. "It took us seven years to get our first perfect hybrid. We called it Sri Tulasi," he says. The company's fortunes have improved ever since. In 2001, when BT cotton seeds became popular in India, Tulasi Seeds tied up with Monsanto for the technology and induced the BT strain in its already popular hybrids.

Today, Tulasi Seeds, based in Guntur, Andhra Pradesh, has become the flagship company of the Rs 400 crore Tulasi group. In 2012/13 Tulasi Seeds's revenues stood at Rs 230 crore and net profit at Rs 28 crore. It has become the fourth largest player in the BT cotton seed market, which is estimated at 38 million packets (of 450 grams each). Tulasi, which is present in all the 10 major cotton growing states, has a market share of about seven per cent. Its focus on R&D has paid off well - it boasts a bank of over 450 cotton varieties having released 13 different hybrids into the market so far. "We are in a very competitive market with 28 companies possessing BT technology. We stay ahead with our R&D focus," says Prabhu.

He began giving back to society as soon as he saw regular profits. Today about 10 per cent of the group's profits (predominantly from Tulasi Seeds), or around Rs 4 crore, is spent on funding the education of needy, bright students through a trust he has floated. "Every successful Indian must realise he has succeeded because of the contribution of society in ways both known and unknown. I hate to call this charity. It is payback."