If you are looking to buy a house for investment in 2013 and not sure where you can earn the best returns, don't worry. We bring you what experts say about real estate destinations that will give good returns over the next three-five years.

Pritam P Hans
Just like balanced diet, your portfolio should be a healthy mix of varied assets for good growth. That is why financial advisors say that you must invest a part of savings in real estate too.

If you are looking to buy a house for investment in 2013 and are not sure where you can earn the best returns , don't worry. We bring you what experts say about real estate destinations that will give good returns over the next threefive years.

In the last couple of years, the real estate market has changed remarkably in both metro cities and small towns. Prices have crossed the peaks reached before the 2008 economic slowdown.

Still, the mid-end residential segment continued to generate buyer interest. This, and increase in prices of raw materials, pushed up prices in most cities.

Realtors will grapple with a lot of inventory and debt in 2013, say experts. "In 2013, developers will price projects more judiciously and offer a lot more pre-launch benefits. Those with large projects and inventory will be under more pressure to give discounts," says Anuj Puri, chairman and country head, Jones Lang LaSalle India, a property consultancy.

The Union Budget can also be a milestone as the sector looks forward to big policy decisions and reforms, including the grant of industry status. 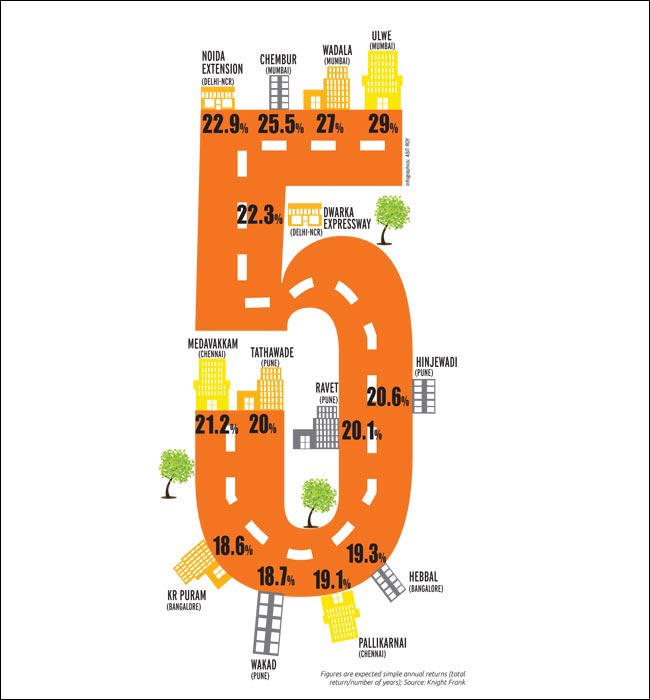 The Delhi-NCR is the favourite of property consultants. With massive infrastructure works in the pipeline, locations such as Dwarka Expressway, Noida Extension and New Gurgaon are likely to attract a lot of buyers-both investors and end-users.

"The market, once driven by investors, has slowly shifted towards end-users, as the former's cash position worsens and end-users step in to capitalise on low prices," says Aniruddh Wahal, co-head, occupier services, DTZ India, a real estate consultancy.

Since 2009, developers have started residential development along the upcoming Dwarka Expressway, an eight-lane expressway that will provide an alternative link between Delhi (Dwarka) and Gurgaon. New projects, expected to be ready by 2015, cater to the middle and high-end segments.

"Its proximity to the capital city and the international airport gives it an edge over other emerging destinations such as Noida-Greater Noida Expressway, Yamuna Expressway, Bhiwadi and Dharuhera," says Wahal.

The area is divided into two parts-the northern region on the side of Dwarka and the southern region closer to Gurgaon. The north (Sectors 103, 106, 109-113) is expected to surpass the south in returns due to proximity to Dwarka and the international airport.

DTZ India says prices in the region will go up by 25-30 per cent per year over the next five years. Knight Frank has forecast an annual return of 16 per cent during the period.

Though developers recognise Noida Extension as a separate location, it comprises Sectors 1, 2, 4, 16B, 16C, 16D and Knowledge Park V of Greater Noida. It is close to Noida (10km from Noida City Centre) and 18km from Connaught Place, New Delhi's prime business location. A proposed metro rail link will improve connectivity between Noida and Delhi.

"It is the most attractive location in the NCR for affordable housing and is expected to see yearly growth of 15-20 per cent in the next five years," says DTZ's Wahal. Knight Frank says properties in Noida Extension will give an annual return of 16 per cent over the next few years.

With options ranging from Rs 3,200-15,000 per sq ft and returns of 18-30%, residential real estate looks promising over the next five years.

Situated around 40km from the south-eastern part of New Delhi, Greater Noida is emerging as an industrial region and an educational hub.

It has good infrastructure and is home to several big companies. It is connected to Noida by a six-lane highway operational since 2002. You can drive from Noida to Greater Noida in 15-20 minutes. The Yamuna Expressway, which has also become a property hotspot, connects it with Agra via Mathura. A metro link will connect it with Noida, Ghaziabad and New Delhi.

Greater Noida is an attractive location for mid- and high-end residential segments. "Though there was not much activity in last 15-17 months due to land acquisition and master plan issues, things are expected to pick up. The area may witness a year-on-year price increase of 20-25 per cent," says Wahal. 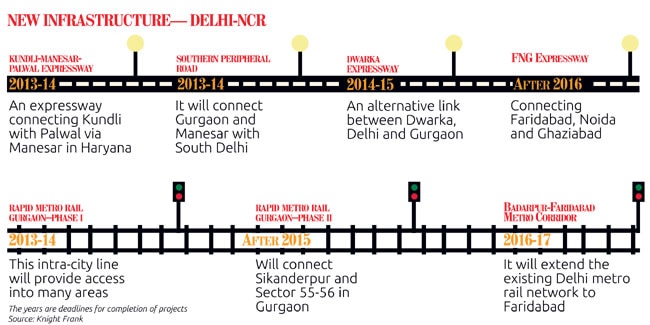 The Mumbai market was subdued in 2012 with prices rising just 2-7 per cent. The demand is expected to pick up in 2013, mainly in the mid-end segment. The eastern suburbs of Mumbai (mainly Chembur, Kurla and Wadala) are expected to provide good returns on account of lower prices compared with areas in central Mumbai and western suburbs.

Ulwe is an emerging location south of the Panvel creek. It is connected with the Uran Road that connects it with the Thane-Belapur Road as well as the JNPT Road to Jawaharlal Nehru Port. While Ulwe is just 7km from Belapur, a commercial hub, five other office destinations are within the 22km radius. Once the Nerul-Seawood-Uran rail network is ready, Ulwe will be connected with major office locations through a mass rapid transport system. At Rs 4,000 per square foot, one can buy a one-bedroom flat here for Rs 20 lakh. Ulwe is the most attractive destination in the Knight Frank report, which says it may give an annual return of 20 per cent in the next five years.

In 2013, developers with large projects and inventory will be under more pressure to give discounts than those with smaller projects and limited inventory.

The upcoming rail, metro and road networks such as the Eastern Freeway, the Santacruz Chembur Link Road and the Chembur-Wadala-Jacob monorail will boost connectivity to the area.

Strategically located in the MMR's central zone, Wadala is at a comfortable distance from the MMR's main employment centres. The Eastern Expressway connects it with other regions of the central zone as well as business hubs in the island city. It is also connected through the suburban train network. It will also benefit from the under-construction Chembur-Wadala-Jacob monorail project as the Wadala-Chembur part is expected to be ready in 2013.

The regional development authority's plan to develop Wadala on the lines of the Bandra-Kurla Complex may add to its appeal. Knight Frank says the area may give an annual return of 18 per cent over the next five years.

This information technology (IT) hub saw steady sales in 2012, prompting developers to launch new projects. Prices in under-construction projects in growing submarkets have risen by 10-30 per cent in the past one year.

"The demand for houses is expected to remain stable or grow moderately in 2013," says Wahal.

Bangalore is expected to offer an annual return of 15 per cent over the next five years.

"The city is the lowest in terms of capital values (compared with Delhi and Mumbai) and has seen moderate price appreciation," says Jain of C&W.

The international airport and other infrastructure projects have shifted momentum towards the northern and eastern regions.

The Bangalore international airport has made Hebbal an important destination. It has also emerged as an IT hub with several technology parks and companies.

Hebbal has good infrastructure to support residential growth. New monorail and high-speed rail networks along with the Bangalore metro will boost its connectivity.

Closeness to the IT hub of Whitefield and Manyata Tech Park makes it a desired residential destination for IT professionals. KR Puram is located on the National Highway 75. The Baiyappanahalli metro station is just 3km away. The proposed Peripheral Ring Road and widening of the Old Madras Road will improve connectivity.