For an equity investor in search of a bargain, the best place to find stocks with potential is the 52-week low charts, at least in the present market. A look at the best stocks among those that touched their year's low in the first quarter of 2012-13.

Money Today
For an equity investor in search of a bargain, the best place to find stocks with potential is the 52-week low charts, at least in the present market.

After all, the list of stocks that have hit their year's low in the first quarter of the financial year includes such big names as Bank of Baroda, Punjab National Bank, Bharat Heavy Electricals, Reliance Industries, Crompton Greaves, GAIL, Oil and Natural Gas Corporation and Adani Enterprises. All these have been top favourites of the investor community at one point or the other.

ALSO READ: How to gain from stock inclusions in indices

Some of these stocks can still give good returns in the long run. However, there's a caveat: 52-week low does not mean the stock has bottomed out. Individual stocks could still fall due to specific company- or sector-related issues or the general market sentiment.

But how does one spot the better ones among the lot, which includes stocks such as Suzlon and Kwality Dairy, that have been shunned by the market due to their inherent weaknesses?

The market picture looks something like this. The favoured defensive sectors, ones that do well even in a slowdown-pharmaceutical, fast moving consumer goods, or FMCG, and information technology-seem to have run their course. Infrastructure and capital goods are gaining ground while banks continue to offer opportunities.

Stocks which touched their 52-week low during April-June 2012
Click here to Enlarge
GAME OF FUNDAMENTALS
Do these stocks offer a good investment opportunity? In a market largely driven by sentiment, such a milestone could be an important trigger for short- to mid-term investment decisions.

Sanjeev Zarbade, vice president, private client group research, Kotak Securities, gives fundamental valuation view. "If a stock is at a 52-week low, there has to be a reason. One can only say that since the stock is available at a 52-week low, to that extent, the risk-reward ratio is better." 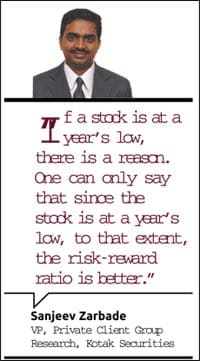 One must always look into the reasons why the stock has fallen to such a level.

Sandeep Nayak, chief executive officer, Centrum Broking, says, "It may not always be a good strategy to invest in a stock bouncing marginally from its 52-week low without considering other factors. The chances of a stock giving good returns after hitting a year's low are high provided the company's underlying business is strong and it does not face any structural issue in expanding sales."

The stock could have fallen because of general negative sentiment in the economy or due to weakness in financial and operational health of the company. The investor must, therefore, figure out where the stock is headed by digging into the company's profitability, operational efficiency, order book and cash flow.

Ajay Puri, president, LSI Financial Services, a boutique investment banking firm, says, "It is worthwhile to look at the turnover and profit growth of companies, expansion plans, market price vis-vis book value, earning per share and price to earning ratio and compare with the industry average."

You can also judge the market sentiment about a stock by looking at its put-to-call ratio. The ratio is calculated by dividing the put volume of a stock by its call volume.

INVESTMENT OPTIONS
Out of 114 stocks at their year's low, we analyse those that have the potential to give good returns. These stocks were selected after stringent quality checks.

First, we removed stocks that had already risen 35 per cent or more after touching the 52-week-low mark, as any upside from here may be limited.

The list was shortened to 47 by selecting only those companies whose operating profits have been rising for the last three financial years. From this, we picked stocks on which market experts are bullish.

David Pezarkar, head of equities, Daiwa Asset Management says, "In the current market, a bottom-up stock-specific strategy will be more rewarding than the sectorfocused one."

Hindalco Industries:
The company reported standalone operating profit of Rs 1,025 crore for the quarter ended March 2012 as against Rs 1,020 crore a year ago. Net profit was Rs 640 crore as against Rs 708 crore in the same quarter in 2011. Market experts said this was better than expected.

The performance of the stock hinges on recovery in aluminum prices and timely execution of projects.

Any sharp rise in coal prices may also affect performance.

According to a Prabhudas Lilladher report issued in May 2012, the management of the bank has maintained its guidance of 1.2-1.4 per cent slippage or bad loans. The report said the strategy of no bulk infrastructure loans would be a big differentiator over the next two-three years. 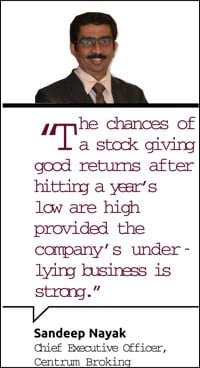 With valuation of 0.85x 2012-13 book value in line with that of Bank of India and Punjab National Bank, all asset-quality risks have been factored in the stock price. The stock can touch Rs 900 in the next few quarters.

Petronet LNG:
With demand for natural gas growing, the company is planning to set up its third liquefied natural gas (LNG) terminal at Gangavaram port in Andhra Pradesh with a capacity of 5 million tonnes per annum (mtpa) at a cost of Rs 4,500 crore.

According to market experts, the demand for imported regassified LNG will increase from 33 mmscmd in 2010-11 to 81 mmscmd in 2013-14. Domestic supply, they say, will fall far short of this, necessitating huge imports.

"The stock can touch Rs 194 in the next four quarters as the current valuation captures marketing margin concerns. It is attractive at 8.5 times 2013-14 expected earning per share," says Sinha. 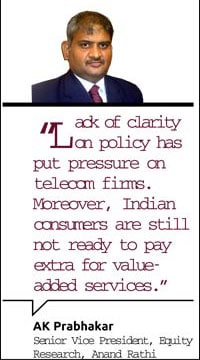 The company has the second-largest market share of 13 per cent in India. It owns seven out of India's top 12 brands in the category. It earned more than 75 per cent of its 2010-11 revenue from domestic operations, mostly through sale of pesticides.

It has a good distribution network that covers 80 per cent of India's districts. Rallis recently added manufacturing capacity by setting up a plant in Dahej (annual capacity 5,000 million tonnes) as a special economic zone (SEZ) to mainly cater to the international market.

"We expect this plant to scale up over the next one-two years and drive growth for the international business. Rallis should also get benefit from tax and other sops that SEZs get. The industry outlook, too, is bright as the crop protection market in India is growing at 10-12 per cent per annum." says Prabhakar of Anand Rathi.

The plant will be exempt from income tax and excise duty in the first five years of operations.

Muthoot Finance:
After the 60 per cent cap on loan-to-value (LTV) ratio imposed by the Reserve Bank of India, the business model of gold loan companies will have to undergo a change. This will put bigger players like Muthoot Finance on a strong footing by reducing non-performing assets (NPAs). Click here to Enlarge
"There will be a dip in growth rate in the short- to medium-term but we believe that the demand for gold loans is robust. In addition, the cap on LTV will sharply reduce NPAs. The company will also benefit from a cut in interest rates in 2012-13," says Vinay Khattar of Edelweiss Securities.

At Rs 139 on 4 July, the stock was trading at 1.8x price-to-book value. "Due to revival of growth in the second half of the year and low valuations, there is high chance of the stock touching Rs 175 in the next 12 months," says Taher Badshah, senior vice president and co-head, equities, Motilal Oswal AMC.

The stock hit its 52-week low on 15 June. However, the market is optimistic about the future.

Prayesh Jain, assistant vice president, research, IIFL, says, "The stock can jump on the back of robust outbound tourism potential from India. By the end of the financial year, we see the stock at Rs 190." Mahindra and Mahindra:
The automobile industry is feeling the heat of higher interest rates, input costs and fuel prices. M&M, however, is in a better position due to a number of reasons.

As Alex Mathews, head of research, Geojit BNP Paribas Financial Services, says: "Despite slowdown in the industry, the company is on track with many product launches planned for 2012-13. Sales at the farm equipment division may revive if the monsoon is normal."

The automotive business margins have improved due to better cost management. The return on equity is 25.81 per cent and the operating margin is 15.47 per cent. The company has also been managing its working capital well, say experts.

TIME TO STAY AWAY

Since August 2011, the rupee has fallen 25 per cent against the dollar. The general view in the market is that it's better to be cautious on companies and sectors that have huge debt burdens, for instance real estate and power utilities. Alongside, businesses that have exposure to the euro zone and depend on imported raw materials are prone to foreign exchange risk. Brijesh Parnami, chief executive officer, distribution, Destimoney Enterprises, says, "Our country imports construction material, heavy machinery and even some cement. Considering the way the rupee is depreciating, things have worsened for the real estate industry. The high cost of imports has drastically increased the cost of real estate projects."

Also, avoid sectors impacted by government policies. These include telecom and infrastructure. Between 2 April and 4 July, the CNX Realty index slipped 2.55 per cent to 237. Likewise, the CNX Infrastructure index fell 2.5 per cent to 2,484.

On telecom, AK Prabhakar, senior vice president, equity research, Anand Rathi, says, "Lack of clarity on 2G and 3G policies has put pressure on financials of telecom companies. The only revenue growth source is value-added services. However, Indian consumers are still not ready to pay extra for these services."