As many as 36 underperforming funds have earned less than a savings bank account in the past three years. If you own such lemons, it's time to get rid of them.

They told her she could achieve her financial goals faster by investing in equity funds. They said the infrastructure sector was poised for explosive growth and that she could be a part of it if she invested in two new funds. Convinced, Vandana Kothari, a Santiniketan-based artist, invested Rs 20,000 in Lotus Infrastructure Fund in November 2007. A month later, she put in another Rs 10,000 in UTI Infrastructure Advantage Fund. Both the funds were new, closed-ended and sectoral.

Financial planners balk at the thought of money lying in a savings bank account. Equity investments can make it zoom to over 15 per cent, while a more conservative approach can yield about 10-12 per cent in a hybrid fund. Even a norisk fixed deposit can give you about 6-7 per cent. Why earn a piffling 3.5 per cent in a savings bank when your money can grow faster elsewhere?

Yet, Kothari would have earned more had her money stayed in her bank account. The two funds have given negative returns since their launch and Kothari's investment is now worth Rs 25,500, down 15 per cent.

The only consolation for Kothari is that she is not alone. More than Rs 7,000 crore invested in 36 consistently underperforming equity funds earned less than this between May 2007 and April 2010. The average annualised returns earned by this category of lemons during the three years was -1.64 per cent. It may be argued that the past three years have been extremely volatile, with two bull runs and one bear attack running back to back. However, during the same period, the broader market, as represented by the Sensex and the Nifty, grew at a compounded annual rate of 7.5 per cent.

The picture becomes more exasperating when you factor in inflation. The wholesale price inflation has risen at an average rate of 6 per cent per annum in the past three years. This means the real drop in the value of an investment is greater than that reflected by the figures. The value of an investment in a mutual fund that has fallen by about 4 per cent every year has actually gone down by about 10 per cent.

Why did these funds perform so badly compared with their peers when all were investing in stocks from the same universe? It is here that the stock-picking and diversification skills of a fund manager come into play, separating the prudent and astute from the reckless and shoddy. What is particularly galling is that despite their poor performance, these funds didn't have any qualms about charging investors up to 2.5 per cent as expense ratio every year.

The worst wealth destroyer was JM HIFI, which made a loss of a whopping 16.9 per cent every year. The value of a lump-sum investment made three years ago is down to 57 per cent. The silver lining is that JM HIFI has an AUM of Rs 12.21 crore, which represents a tiny fraction of the total wealth invested in equity funds. But there are other, bigger lemons, which bled consistently even as the overall market flourished. 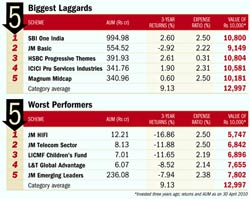 Click here to Enlarge
Take the JM Basic Fund, which has an AUM of Rs 554.52 crore and has lost 2.92 per cent annually in the past three years. The fund focuses on basic industries, such as infrastructure, energy and real estate, and over 80 per cent of its corpus is invested in small-cap and mid-cap stocks. This aggression worked wonders in 2006 and 2007, when it notched up returns of 43 per cent and 111 per cent, respectively, outperforming other funds by a huge margin. But the overexposure to real estate and reliance on mid-caps and small-caps proved catastrophic in 2008, when it lost 75 per cent. Despite phenomenal returns of 100.41 per cent in 2009 (the category average was 84.32 per cent, while the Nifty rose 75 per cent), the fund remains in the doghouse, with a single star rating from Value Research. The lesson for investors: stay away from sectoral and thematic funds as they overexpose themselves to a single sector.

Many of these NFOs were based on woolly ideas. Consider the SBI One India Fund. Launched in December 2006, this three-year, closed-ended fund was mandated to invest in companies based in four regions of the country. There was also a minimum and maximum limit of 15 per cent and 55 per cent, respectively, for equity exposure in each region. The logic behind this geographical straitjacket is best known to the marketing honchos of SBI Mutual Fund. Yet, investors couldn't care less and the NFO collected a massive Rs 1,900 crore. The fund has given an annualised return of 1.74 per cent since its launch. There's a silver lining here too: the fund now has an AUM of Rs 994 crore, which means that almost half of the investors have realised their folly and exited from the fund.

Not everyone is able to take the tough decision to book a loss and move on. To get anchored to the price they pay is a trait typical to small investors. Many also feel that exiting at a loss is an admission of defeat. Instead of trying to recoup his losses from an underperformer, an investor ought to switch to a better fund. "Sometimes it is wiser to book losses and exit investments than to hold on to losers," says Shikha Hora, director, advisory and insurance, at Religare Macquarie Private Wealth. It's an emotional hurdle that he must cross to be able to get his portfolio working for him again.

The big question: when should you sell a fund? The answer is simple: when it fails to deliver returns. Experts say that an investor should compare a fund's performance against its benchmark index. If it consistently underperforms the benchmark index for two or more quarters, it might be time to bid goodbye. Also compare your fund's returns with the category average. If the fund has underperformed on both counts, it is a compelling candidate for the junkyard.

We say this not because we have the luxury of hindsight. Who would have known which fund would do badly three years ago? The answer lies in the Money Today-Value Research ranking of best mutual funds. In our first ranking of best mutual funds in June 2007, we had placed HDFC Equity Fund at the top. Anybody who had invested in the fund three years ago would have earned annualised returns of 17.5 per cent. Clearly, you don't have to be Warren Buffett to know which mutual fund to invest in. You just need to be a Money Today reader. 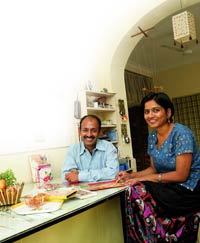