News
Magazine
Cover Story
How we did it

The base data for the exercise was pulled out of CMIE's Prowess database. A total of 6,941 companies listed on the BSE and NSE were considered as our primary universe. 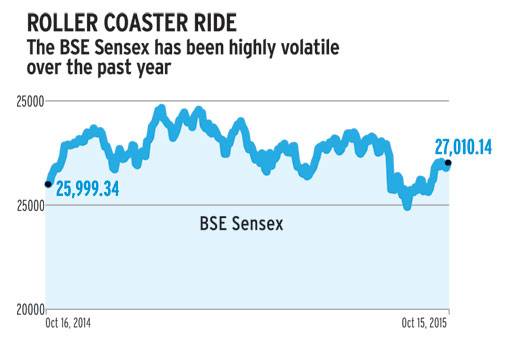 The past one year has been one of hugely undulating emotions - a less used term for business, but perhaps appropriate in the current context - for corporate India. A new government had taken over at the Centre in mid-2014, amidst hopes of swifter decision making, saner policies, less corruption, better tax policies, a softer interest rate regime, stronger GDP growth, and so on.

The crazy peaks and troughs of the chart sort of symbolise the joys and disappointments encountered on this journey. Of course, stock indices' movements are influenced not only by government policy; company performance, strategies, moves, also contribute a fair bit. All put together, it has been one roller-coaster ride for companies and investors.

Which is why the BT500 becomes even more crucial in a time like this, in a time of great change. It coalesces the array of dancing numbers into a stable, understandable pattern. The premise of the BT500, average market capitalisation of listed companies for six months between April and September, helps make that vision clear. And as such, this year's BT500 listing was prepared with gusto, and much anticipation.

The base data for the exercise was pulled out of CMIE's Prowess database. A total of 6,941 companies listed on the BSE and NSE were considered as our primary universe. To weed out illiquid companies, stocks that traded for less than 20 per cent of the total number of trading days (125) between April 1 and September 30, 2015, were not considered. Finally, 3,378 companies qualified for the rankings. The top 1,000 companies, based on their average market cap value, were ranked.

The market capitalisation was the primary metric used to rank the companies. But just showing the market cap does not present a holistic picture. Therefore, we have pulled out some other key metrices, too. These include Total Assets, Total Income, Net Profit, profit as percentage of total income, Return on Net Worth and Return on Capital Employed. Rankings based on these parameters have also been provided to give our readers an understanding of the broader picture. The financial year ended March 2015 was considered for the financial parameters, and exceptions have been specified with footnotes. Standalone numbers were taken into account for all the ranked companies.