Indian companies have come a long way since 1959, when industrialist Basant Kumar Birla set up the first major venture by an Indian company in a foreign country - a textile mill in Ethiopia.

In 1959, just 12 years after India achieved independence from British rule, industrialist Basant Kumar Birla set up the first major venture by an Indian company in a foreign country - a textile mill in Ethiopia.

Indian companies have come a long way since then. They have acquired foreign firms, established factories and offices in dozens of countries, apart from exporting everything from clothes to medicines to autos and software services to every part of the globe.

The most recent such foray that highlights the growing global footprint of local companies came on October 18, just a day before this magazine went to press. The Tata group's Indian Hotels Company has made a $1.86 billion bid to acquire Orient-Express Hotels, the iconic hospitality and luxury-travel company based in the British overseas territory of Bermuda.

The Tata group has led the way among Indian companies in expanding overseas. Over the past 12 years, India's biggest business house by revenue has made a string of acquisitions - Tetley Tea in the United Kingdom, Daewoo's truck manufacturing unit in South Korea, a stake in a Spanish bus company, and chemicals companies in North America.

Click here to Enlarge
The most high-profile deals, however, were the takeovers of luxury car brands Jaguar and Land Rover in the UK and the Anglo-Dutch steel maker Corus. The two deals now power the top lines of Tata Motors and Tata Steel, respectively. The group earned 58 per cent of its 2011/12 revenue of over $100 billion from overseas.

It has two oil and gas blocks each in Yemen, Peru, Colombia, and one in Australia, says a spokesperson. Its latest passion is shale gas assets in the US. "Our total investment in shale gas now exceeds $4 billion," he adds. Chairman Mukesh Ambani told shareholders in June Reliance was among the largest foreign investors in the US in this "new, exciting area".

Software companies are not far behind.

In September, Infosys announced the takeover of Zurich-based Lodestone for $350 million. Big players such as Tata Consultancy Services, Infosys, Wipro and HCL Technologies provide software services to many top companies in the United States and Europe, and earn most of their revenue from outside India. These companies have prompted their global rivals to re-define business models and seek ways to tap into Indian capabilities.

Pharmaceuticals is another sector going global. Indian drug makers have leveraged their skills to make and export generic drugs that cost a fraction of branded medicines to all corners of the world. 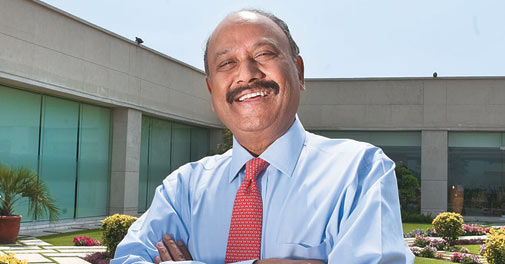 Ease of doing business and predictable policies (in other countries) are important factors that prompt Indian businesses to go global: G.M. Rao
The trend has gathered momentum in the 21st century. "Among emerging economies, India today has the second-largest number of global multinational corporations after China," says Raveendra Chittoor, a professor of competitive strategy at the Indian School of Business (ISB), Hyderabad. India, he says, has 20 to 30 such firms while China has about 10 more.

India was fifth in the world in terms of value of cross-border acquisition deals in 2010, after the US, Canada, Japan and China, he added, citing World Investment Report 2011 of the United Nations Conference on Trade and Development.

"The scale of overseas investment by domestic companies has also expanded," Khan said. In 2010, the average size of deals struck by Indian firms was $190 million, second only to those by Chinese companies, $197 million.

Lately, the GMR group has led all others in striking overseas deals.

"GMR aspires to be a global player," says its Chairman, G.M. Rao, in an email to Business Today. "Our recent forays and acquisitions have been aligned to strategic objectives." Rao says GMR's foray into international airports is aimed at maintaining its growth momentum, as there is unlikely to be private investment in any new medium or large airport in India anytime soon. The company's investment in coal resources will help build fuel security for its power projects, he says.

"Having a wider portfolio of countries helps, as you create a platform that is de-risked to some extent," he adds. Fortis has a presence in 10 countries besides India. Bali says the group's international foray was helped by the fact that it first made its mark locally. "We will continue to strengthen our leadership position in India. It will always be half of our global business."

Home Truths
While Indian companies' global expansion is reason to celebrate, one uncomfortable question must be faced. Are they going abroad solely because of the huge opportunities there, or because they are chary of investing at home?

"From around 2003 to 2008 most Indian companies went abroad driven by the need to expand their market reach, seek new opportunities and technology," says Devesh Kapur, Director of the Center for Advanced Study of India, University of Pennsylvania, US. "But over the last few years, an important driver seems to be the problems of doing business in India."

Kapur, who previously taught at Harvard University, feels that the earlier round had a more positive thrust to it, while the post-2008 phase is more in the nature of a capital flight.

"There is a certain frustration with the hurdles faced in doing business in India -- the red-tapism and the corruption," Harsh Vardhan Goenka, Chairman, RPG Enterprises, told Business Today in April. "I want to divorce my companies from the need to have me lobbying in Delhi." Goenka, whose group includes tyre maker Ceat and software services provider Zensar, wants more than half of RPG Group's revenue to come from overseas by 2015.

"We believe that the ease of doing business and predictable regulations and policies (in other countries) are also important factors that prompt Indian businesses to go global," says GMR's Rao.

He should know, considering the recent controversy surrounding the modernisation of the GMR-run Indira Gandhi International Airport in Delhi. In August, the Comptroller and Auditor General of India said possible undue favours had been granted to Delhi International Airport (P) Ltd, the joint venture of GMR, the Airports Authority of India, Germany's Fraport, and Malaysia Airports Holdings Berhad, which runs the airport. GMR has denied receiving any.

Perhaps the strongest remarks expressing the frustration of Indian firms have come from Tata Group Chairman Ratan Tata, who spearheaded his group's global expansion. In November 2010, he recalled how, in the 1990s, he preferred to abandon his plans to start an airline than pay a bribe to get the proposal approved.