How and why once-mighty companies fell off the BT Top 25 list.

Grasim, Gujarat Ambuja, ACC, Cipla, Tata Tea… the list of companies that were once a shoo-in for the Top 25 positions in the BT500, but have since fallen down the rankings, is long. Why did they fall, and what sort of companies will compete for the zenith in coming years? Corporate India's answers are varied.

Some experts feel that reaching the top in market capitalisation depends greatly on external factors, primarily the sectors the company operates in, the degree of consolidation in these sectors and the winds of economic change, rather than the company's own efforts. "Telecom, information technology, oil and gas and commodities have come up," says Raamdeo Agrawal, Joint Managing Director of broking firm Motilal Oswal. "To be in the Top 25, one has to also be in seriously consolidated sectors, with sales of Rs 50,000 to Rs 60,000 crore and profits of half a billion dollars. Only a few businesses offer that opportunity." 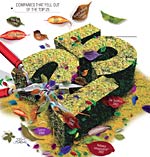 Click here to Enlarge
This is especially the case with pharmaceutical companies. There was a time when GlaxoSmithKline (then simply Glaxo), Cipla, Dr Reddy's and Ranbaxy would all figure in the Top 25 list. Currently, only Sun Pharma finds a place. It stands at rank 30, but if private companies are considered separately, its rank jumps to 19. (This year, the BT500 list has grouped private and public sector companies together; in earlier years they were ranked separately.)

"Pharma companies have grown at a slower pace than the rest," says Vinod Sharma, Head of Private Broking and Wealth Management, HDFC Securities. "In the last 10 years, their sales growth has been at least 200 basis points lower than the other companies on the Bombay Stock Exchange 500 list. So they have been elbowed out of the top."

Sun Pharma has held its own because of its pronounced global focus, feels Agrawal. "Pharma companies that have a greater global play are doing better, while the ones that were more India-focused have fallen behind," he says. Sun Pharma, with a market cap of Rs 46,853 - on October 4 - is the second-largest generic pharma company in the world after the Israel-headquartered Teva Pharmaceutical.

There is a culture of low dividend payment by promoters in India... So no one invests in the markets for a steady dividend income: Raamdeo Agrawal
Again, right up to the mid-1990s, cement major ACC was a giant, frequently in Top 25 lists, with a share book value of Rs 100 when most others' book values were of Rs 10. Its scrip always traded at a much higher price than that of others. But now it is way down in the rankings, as are other cement makers like Gujarat Ambuja and Grasim.

"Cement companies have low price to earnings, or PE, multiples now and, therefore, are out of the top league," says Sharma. Agrawal notes that cement is essentially a local product, with little scope for global play. In an increasingly globalised world, this limits the capacity for growth of those in this sector.

Curiously, even as the Aditya Birla Group's footprint has grown enormously under Kumar Mangalam Birla, its companies which were regulars on the BT Top 25 list at one time, Grasim and Hindalco, are no longer on it. While Grasim is way down the list, aluminium giant Hindalco is ranked 39. (Had private companies been considered separately, Hindalco would have been at 27, still outside the Top 25.) So too Aditya Birla Nuvo, formed through the merger of Indian Rayon and Indo Gulf Fertilisers, both of which were in the Top 25 once, falls outside this elite group now.

The developed world is ageing fast... and health care industry in India is poised to be a hotbed of innovation: Roopen Roy
But individual performance also has a strong bearing on market cap. "If a company is consistently rising up the ladder, it must be better managed than others," says HDFC's Sharma. "If it is sliding, its management may also be deteriorating." Agrawal believes that the market caps of many successful companies suffer because the promoters are miserly in rewarding shareholders. "There is a culture of low dividend payment by promoters in India," he says. "So no one invests in the markets for a steady dividend income."

He is equally critical of companies that sit on large cash reserves without investing them. "Shareholders want to see their money invested as risk-capital," he says. "Holding it as cash is the worst use of capital. Companies should either invest it or return it as dividend." What does the future hold? Both Sharma and Agrawal feel financial services and banks will be winning sectors in coming years and can dominate the Top 25 list. "There is a boom in consumer facing industries," he says. 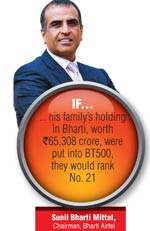 Roopen Roy, Managing Director, the management consulting arm of Deloitte in India, is betting on health care. "The developed world is ageing fast," he says. "There will be an expansion in the demand for health care. Innovators will develop business models to keep the lid on surging costs that will threaten the financial stability of developed nations.

The health care industry in India is poised to be a hotbed of innovation." The current slowdown and churn in global markets will leave a lasting impact, many feel. "When we emerge from the current crisis, many mighty brands will have fallen, many currently famous enterprises will have bitten the dust," says Roy. " Those enterprises that cut costs and restructure successfully will survive. Those which innovate and transform will thrive."