BT500: Private firms and PSUs' merger units into one listing unlocks a treasure trove of value

The 2011 edition of the 'India's Most Valuable Companies' offers just one listing of the private firms and PSUs. The most comprehensive ranking reflects a new world where investors reward, or punish, companies in proportion to the value (shareholder wealth) they create or destroy; ownership is incidental.Full coverage: India's most valuable companies  | Videos

0h, East is East, and West is West, and never the twain shall meet...
Rudyard Kipling, The Ballad of East and West, 1892

Twenty years ago, when Business Today was born, private companies and government-owned companies (or public-sector units, PSUs) would marry well with Kipling's immortal line. Finance Minister Manmohan Singh had just announced the onset of nation-changing economic reforms, but their impact would be visible only later.

India, an agrarian nation subject to extreme red-tapism, was growing at sluggish 'Hindu' growth rates of around 3.5 per cent.

PSUs enjoyed monopoly - through regulation - in their sectors. More importantly from BT's perspective, most of the big listed PSUs had very low public float and were almost completely owned by the government.

So, when the first BT500 listing of India's most valuable companies was published in 1992, only those PSUs were ranked that had low government ownership. Needless to say, they were very few. It was only a few years later that PSUs were put together and ranked in a separate list.

In these 20 years, the country has transformed. 'New India' is one of the world's fastest growing economies, driven by sectors like software services, telecom, pharmaceuticals, retail, real estate and automobiles. Global investors have taken note, and both FII (foreign institutional investor) and FDI (foreign direct investment) have become buzz-words.

Thousands of multinational corporations have set up shop, even as thousands of Indian companies have made a beeline to foreign shores.

That last set - surprise - also includes leading PSUs; they are almost unrecognisable today compared to 20 years ago. They are acquiring both companies as well as assets abroad; they have become leaner, more efficient, more competitive. 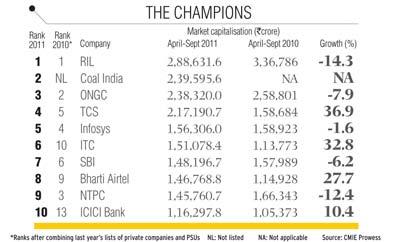 More importantly, their ownership is not as dominated by government shareholding, thanks to the disinvestment process, which also brought into the stock markets a variety of government companies in various sectors.

And so, 20 years after the BT500 rankings began, there remains no case for PSUs and private companies to be ranked separately. The 2011 edition of the BT500, therefore, offers just one listing.

The most comprehensive ranking of 'India's Most Valuable Companies' just got more comprehensive. The change reflects a new world where investors reward, or punish, companies in proportion to the value (shareholder wealth) they create or destroy; ownership is incidental.

Change is in the air
In the merged list, one outcome remains unchanged. Reliance Industries, traditionally the No. 1 private company, retains its top billing in the combined list as well. But traditional PSU No. 1, ONGC, does not take the No. 2 slot. That goes to new hot stock Coal India, a PSU that listed on November 4, 2010 to an overwhelming response.

Kumar Mangalam Birla's UltraTech Cement gained more market value than it did last year
There are four PSUs in the top 10, and eight in the top 20. These are all strong companies in their own right, and capable of challenging the big private entrepreneurs and their enterprises.

To ensure better comparability, we also combined last year's private and PSU rankings. All last year ranks mentioned here reflect that. This year, two of the biggest value creators have added more value than last year, a significant achievement in a volatile, even sliding, market.

Helped by its Rs 10,000-crore capital outlay plan over the next three years, UltraTech Cement posted an 88.85 per cent growth in its market cap this year (April-September, the period taken into account for BT500 rankings), compared to 74.18 per cent last year. Also significant is Bharti Airtel's performance in the light of its strong foray into African markets.

MUST READ: PSUs that have done very well

Last year, the telecom major's market cap had declined 24.13 per cent; but this year, it has grown 27.7 per cent. But many other big companies saw the dice roll the other way. Three of Reliance-ADAG's companies lost significant market value.

Reliance Communications, thanks to mounting debt, saw a decline of 46 per cent in market value in 2011, following a 37.97 per cent fall in 2010. Reliance Infrastructure and Reliance Capital's market caps have fallen 45.6 per cent and 31.8 per cent, respectively.

N. Chandrasekaran's TCS bests Infosys to the top of the IT rankings after three years
Four PSU companies - Hindustan Copper, MMTC, Neyveli Lignite Corporation and Steel Authority of India - recorded erosion in their 2011 market value compared to growth posted in 2010, due to a decline in global commodity prices.

In terms of sectors, information technology, or IT, put up a relatively better show this year. A 1.6 per cent slide in Infosys's market cap and a 37 per cent growth in TCS's market cap propelled the latter into No. 1 rank in IT after three years.

TCS leveraged its broad-based services offerings and delivery capabilities, even as Infosys focused on pricing and margins. The change in guard at Infosys also created some uncertainty.

A stable rupee for the larger part of financial year 2010/11 propped up the IT companies, which found many takers for their services in the cost-conscious, recession-hit Western economies. On the other hand, the real estate sector has seen the maximum damage.

DLF's market cap has fallen 28 per cent, and Unitech's, 56 per cent. While DLF's rank slid by 10 slots, Unitech fell from No. 69 last year to No. 123 this year. Their beleaguered situation reflects the state of the industry.

Rising interest rates and scarcity of working capital have increased their cost of funds; and buyers are sitting on the fence owing to higher prices and increased home loan rates. Experts feel high prices and low volumes cannot co-exist for long, particularly in a tight liquidity environment.

So, unless interest rates go down and make borrowing and buying affordable, price correction is the only immediate source of respite.

That interest rates are unlikely to go down in a hurry is evident from the high inflation levels, despite hikes in interest rates by the banking regulator - Reserve Bank of India - becoming a way of life. The rate hikes have percolated into the deposit and lending rates of banks, increasing the cost of funds for banks and the borrowing costs for its customers.

"Banking stocks have been marred by the perception of high credit costs," says Raamdeo Agrawal, Joint Managing Director of Motilal Oswal Financial Services. Agrawal feels rate hikes have crossed their peak, and banking will be a much bigger opportunity when the hikes are reversed. However, the rising interest rate scenario coupled with a slowing economy could spell trouble for the banking sector with the likelihood of rising non-performing assets.

Anil Ambani
Rising inflation and interest rates have hit companies hard, but there are other worries, too: higher input costs (including raw materials), fuel costs and salary costs. The net result is stress on profitability and compression in margins. The uncertain global economic climate, especially in Europe, has led to bouts of volatility in the capital markets. While equity capital raising has been at a near standstill, higher interest rates have made debt capital expensive too. Companies have little choice but to pass on much of these costs to customers. 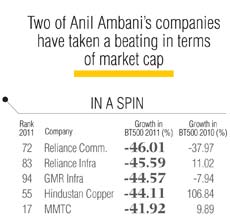 Happily, consumer demand has been unrelenting, leading to healthy top-line growth (read The Slow, Great Squeeze, page 76). What has added to the gloom is the slowdown in FII inflows. A comparison of BT500 data with FII inflows over the past five years reveals interesting details. In 2007, the top 500 companies (including the public sector) had a healthy 25 per cent growth in their April-September average market capitalisation; FII inflows in the same period surged by $10.98 billion. In 2008 and 2009, the BT500 market capitalisation declined by 0.68 and 1.75 per cent, respectively. In 2008, FIIs recorded an outflow of $5.77 billion in the first six months. 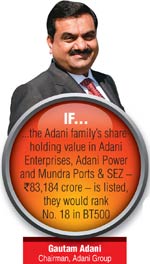 Finally, even as we made the landmark decision to merge private companies and PSUs into a unified ranking, we also looked at two sides of a certain coin. On one side, we examined companies that have slipped out of the top 25 over the past 19 years (read Fallen Leaves, page 70) and what lessons their slide holds. On the other, we looked at companies that have inexorably risen through the ranks over the past five years. One of them, Adani Enterprises, ranks at No.19. Read about Adani, and the six other companies in this league in Chartbusters, on page 62. Twenty years later, these companies might be the big boys, with other challengers hot on their heels. But let us leave that for another day.