Just Dial's market valuation has soared after a successful IPO

Just Dial is also the biggest success story over the past year in terms of stock market listing. Its initial public offering received bids for nearly 12 times the shares on sale.

Just Dial founder V.S.S. Mani started the company in 1996 from a garage in Mumbai. PHOTO: Rachit Goswami/www.indiatodayimages.com
When Internet entrepreneur Raj Koneru invested about Rs 6.5 crore for a 40 per cent stake in Just Dial, the local search service provider's founder V.S.S. Mani thought the company was being overvalued. Mani didn't complain though, as the cash helped him expand the business. That deal happened in 2000, and the investment valued the company at more than five times its annual revenue of Rs 3 crore. Koneru hadn't overvalued Just Dial for sure. He made almost 26 times returns on his investment by selling his stake in the company in stages to a few private-equity players by 2007, says Mani.

No doubt, Koneru made handsome returns on his investment. But he probably exited a bit too soon. Just Dial's market value has continued to soar. The company is now worth over Rs 6,100 crore, or about $1 billion. That's more than 350 times its valuation in 2000. The company's phenomenal success has also attracted Bollywood celebrities. Superstar Amitabh Bachchan has invested in the company while acclaimed filmmaker Anurag Kashyap is looking to make a movie on Mani's life.

Just Dial is also the biggest success story over the past year in terms of stock market listing. Its initial public offering received bids for nearly 12 times the shares on sale. Despite stock market volatility and most investors sitting on the sidelines, the company made an impressive debut in June. From its offer price of Rs 530 apiece, the stock almost doubled to hit a record high of Rs 1,046.05 on October 7. Though the stock is off its peak now, the price rise has catapulted the company into the top 200 companies in the BT 500 listing - it's ranked 180. During the same period the Bombay Stock Exchange's benchmark Sensex gained only two per cent (See Just Dial versus the Sensex).

"The listing helped us gain a higher public profile, which is good for business," says Mani. It also provided liquidity to investors such as private equity players SAIF Partners, Tiger Global and Sequoia Capital, which made between eight and 11 times return on their initial investment in Just Dial over five to six years.

Besides, of the five largest initial public offerings in the country over the past year, only two, led by Just Dial, have made money for investors (See How Debutants Fared). The search service provider enjoys a massive premium in the stock market. This is evident from the fact that the stock trades at a 12-month trailing price-to-earnings ratio of 100 times. The ratio is an indicator of a company's earning potential. Just Dial is the darling of investors also because it has no listed peers in India and there is immense interest for search engine companies globally.

The closest company comparable to Just Dial is US-based Yelp Inc, which listed in March last year at $15 per share. Yelp's stock is trading around $67 per share now, giving it a market value of $4.4 billion. But the US company hasn't reported a profit since it was founded in 2004. For the six months ended June 30, Yelp reported a loss of $5.7 million on revenue of $101.2 million. Just Dial has been profitable since its first year of operations. For the quarter ended June 30, it reported a 68 per cent jump in net profit to Rs 28 crore ($4.6 million) while revenue climbed 28 per cent to Rs 104.6 crore. "The company is highly profit-focused," says Mani. "There is zero wastage of resources." 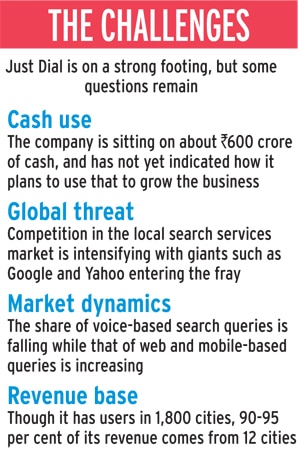 Mani, a first-generation entrepreneur, was born into a middle-class south Indian family. The eldest among three brothers and a sister, he began working early and attended an evening college to complete his graduation. The idea of setting up a local search service provider originated in Mani's mind in the 1980s when he began selling advertisements and listings for United Database India for its yellow pages in Delhi. He became an entrepreneur in 1992 when he set up search company Ask Me with two partners. The partnership did not last long due to differences of opinion and he soon sold his stake in Ask Me to his partners. (See http://businesstoday.in/justdial for details of his entrepreneurial journey.) In 1996, Mani set up Just Dial from a garage in the Mumbai suburb of Malad.

Just Dial started as a voice-based service. In 1999, at the peak of the dotcom boom, consulting firm PricewaterhouseCoopers (PwC) advised Mani to move out of voice and join the Internet bandwagon to grow his business rapidly. He didn't agree with PwC, arguing that the use of phones will grow faster than the Internet in India. He has been proved right, with the number of phone users increasing exponentially in the past decade.

Just Dial has a robust business model. It earns revenue from the customers who advertise with it. It had more than 221,000 paid advertisers as of June, and received more than 364 million search requests during the year ended March. Its users are spread across 1,800 cities in India, though about 90 to 95 per cent of its revenue comes from 12 cities. The advertisers pay between Rs 3,000 to a few lakh depending on the location, and products and services they provide. "We have very high customer retention. That's one of the reasons for our high growth," says Mani.

As Just Dial receives the entire payment in advance from advertisers, it has zero debt on its books. It also has massive cash on hand - almost Rs 600 crore. While Mani, who along with other promoters controls 33 per cent of Just Dial, doesn't say how he plans to utilise this cash, an analyst from a foreign brokerage says on condition of anonymity that the company could use the money to accelerate expansion and to make acquisitions. The CEO of a wealth management firm, who does not want to be named, says the market is attracted towards companies that generate a lot of cash but it has yet to be seen how well Mani uses this cash in growing his business. 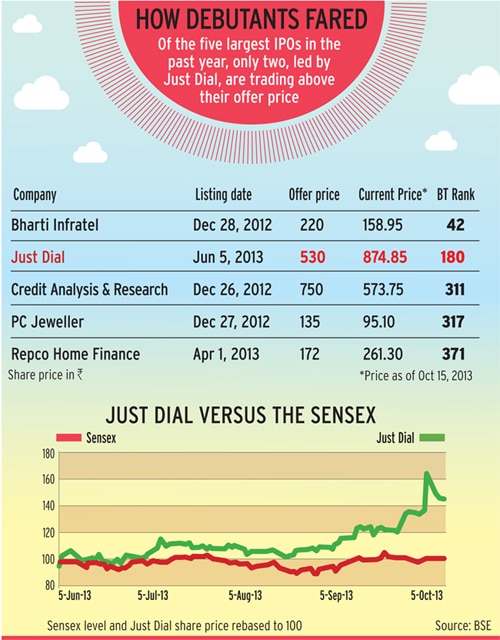 The market dynamics are changing now. Most people now prefer to search for information using the web. In keeping with the times, Mani launched the Just Dial portal in 2007. The share of voice-based search queries has dropped to 28 per cent from 75 per cent in 2007-2009. Online queries now make up 72 per cent, of which 30 per cent are from mobile phones.

Mani, who took a sabbatical for a few months after the dotcom bust at the turn of the century and spent time traveling and practising yoga to recharge himself, is now dreaming big in the mobile segment. He has shifted his focus to making mobile applications that will make it easier for users to search for information. So if one wants to book movie tickets or order food from a restaurant it can be done in three to four easy steps using the apps. He also plans to diversify into regional language search services. Currently, the company provides search services only in English. He is not in a hurry though, as he feels that Just Dial is a strong brand and regional players still operate through voice services. "We leverage technology to the hilt," he says. "We are obsessed with accuracy, simplicity and speed."

The reason Mani is developing newer phone apps is because he feels mobile telephony growth will exceed the pace of Internet expansion in India. He is aware that technology is constantly evolving and competition from local as well as overseas players is heating up. Search engine giants such as Google and Yahoo are slowly becoming a threat to Just Dial with their local services. Mani once wanted to make Just Dial the local search engine of the world, but he now realises he must guard his home turf from global companies before he can venture overseas. As competition intensifies, the next couple of years will be crucial for Just Dial. Mani has the first-mover advantage and he is ready to take competition head on. "The marketplace is full of activity," he says. "For us this is just the beginning."