Capricorn Food is among the top mango processors in India

Rahoul Jain has made Capricorn Food one of the top mango processors in India. The company sells pulp, concentrates and frozen fruit, but mango pulp accounts for the largest chunk of its business.

Capricorn Food MD Rahoul Jain. PHOTO: H.K. RAJASHEKAR
Ajay Modi
When life hands you lemons, make lemonade. And if life gives you a mango orchard, make mango pulp. That's what Rahoul Jain did when his family was struggling to manage a 100-acre mango orchard near Chennai in the late 1990s. Fourteen years ago, the young chemical engineer set up a mango processing unit; and today, his company, Capricorn Food Products India, is one of the top mango processors in the country.

"It was only destiny that I ventured into the processing industry. We used to lease out our 100-acre orchard and there were frequent problems associated with leasing. I thought of setting up a processing unit for mangoes," says Jain, Managing Director of Chennai-based Capricorn Food.

Capricorn Food is far from being the oldest player in the business. But even Jain is amazed at its growth in such a short span. The company sells pulp, concentrates and frozen fruit, but mango pulp accounts for the largest chunk of its business.  It has already managed to corner about 25 per cent share of the Rs 700-crore domestic mango pulp market, which mostly caters to some of the biggest players in the food industry for fruit-based beverages, dairy products and confectionery. 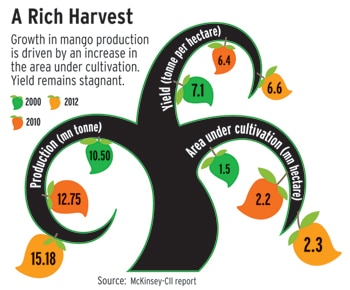 It supplies to a host of food giants such as PepsiCo, Coca-Cola, Unilever, Nestle and Parle Agro. An official at RJ Corp, PepsiCo's biggest bottler in India, says the company buys 95 per cent of its pulp requirements for its mango drink, Slice, from Capricorn Food.

The company's top line reflects its stunning growth: set up in 1999 with an investment of Rs 2.5 crore, today its annual revenue is about Rs 300 crore, of which half comes from exports. Jain says the annual profit is Rs 30-35 crore. Capricorn Food processes a staggering 200,000 tonnes of mangoes each year as well as another 50,000 tonnes of fruit such as guavas, papayas and watermelons.  He doesn't plan to stop at that.

"This is just the tip of the iceberg. We have a long way to go," says the 40-year-old Jain.

India is the world's biggest mango producer, accounting for about 45 per cent of global production. Most of the mangoes produced in India are consumed domestically and less than five per cent get processed. Over the years, exports, especially of mango pulp, have also grown steadily. According to the Agricultural and Processed Food Products Export Development Authority, India's mango pulp exports rose to Rs 608 crore in 2012/13 from Rs 297 crore in 2002/03. Fresh-mango exports grew to Rs 265 crore from Rs 84 crore during the same period.

The fact that mango remains one of the most popular flavours in India today has certainly helped. Some leading domestic players - Jain Irrigation, Capricorn Food, Mother Dairy, Foods and Inns - are betting on the expanding mango-based beverage market. Coca-Cola, a mango pulp buyer in India, has launched a programme with Jain Irrigation to enhance mango yields. Sunil Deshpande, Senior Vice-President at Jain Irrigation, says sales of mango-based beverages such as Maaza, Slice and Frooti are growing every year. A number of regional brands such as Mango Sip in western India and Maa in southern India are doing well. "Indians prefer mango-based drinks to apple or orange," he says. 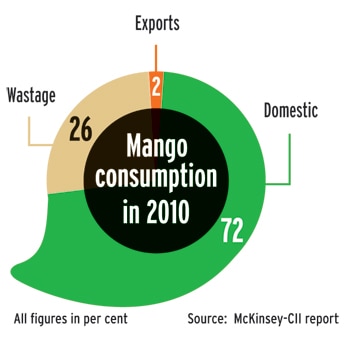 Food processing companies such as Capricorn Food have been on the radar of investment firms. In April, Milestone Religare, which has since been acquired by PE firm Quadria Capital, invested Rs 60 crore in the company. Investors are optimistic about the fruit business in India. Rajesh Singhal, Principal Managing Partner, Quadria Capital, says the firm is excited to partner with Capricorn Food. "Capricorn is among the largest players in the processed fruits space in India, with a marquee client base in India and abroad. The processed fruit and vegetables space is expected to grow substantially over the next few years. And Capricorn, with its strong management team, is ideally placed to capitalise on this opportunity," he says.

Capricorn Food may have started out with its own orchards, but has grown way beyond that today. And it plans to tap its core strengths to grow even further. Its five processing units are located near fruit-growing regions to minimise transit time and costs. The company is looking to foray into manufacturing of fruit in cups and canning and bottling of vegetables. It also plans to participate in mega food parks.

Capricorn will invest Rs 50 crore to set up a 100-tonnes-a-day plant for tomato paste in Maharashtra which Jain says will be the biggest in the country. "We do not get a sizeable quantity from our orchards and we have to depend on the open market for mangoes. This exposes us to the volatilities of price and production," says Jain. "I do not have a role model but I aim to be one of the biggest food processors of the country. We are on the right track."