The 48-year-old superstar has successfully leveraged adulation and extended his man-of-the-masses image to create a charity and lifestyle brand, Being Human, which has almost become as big as him.

Salman Khan <em>Photo: Nishikant Gamre/www.indiatodayimages.com</em>
Ajita Shashidhar
Ekta Aggarwal, Creative Director of marketing consultancy Landor, got into an autorickshaw in Mumbai that was festooned with Salman Khan's photographs soon after Dabangg 2 was released. The driver said he decked up his autorickshaw with new cutouts of Khan each time he released a film because the actor had paid for his son's operation.

For millions of fans such as the autorickshaw driver, Khan isn't just a larger-than-life superstar. He is the Bollywood bad guy with a heart of gold who helps them out when they are down and out. And the 48-year-old superstar has successfully leveraged such adulation and extended his man-of-the-masses image to create a charity and lifestyle brand, Being Human, which has almost become as big as him. "Being Human has become a cult. In fact, it has become larger than Brand Salman," says Aggarwal.

"Salman doesn't just entertain, but also empowers. Right from the kind of movies he picks to the projects he invests in, he is clear that he will only talk to the masses."

The star's social clout comes from the Being Human Foundation which provides affordable health-care and primary education to underprivileged people across the country. Set up in 2007, the foundation has teamed up with organisations such as the Marrow Donors Registry India to help patients who suffer from diseases such as leukemia and thalassemia.

It recently tied up with Coca-Cola and infotech company NIIT to help a career development centre which provides computer and electrical training to people from rural areas. 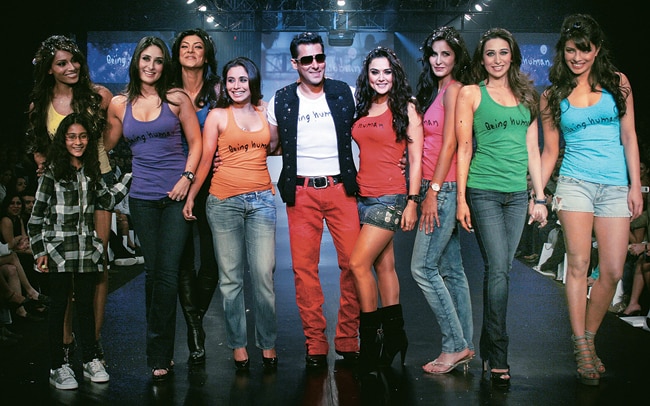 On the ramp: Salman Khan with Bollywood stars at a Being Human fashion show in Mumbai
Being Human is a charity with an unusual revenue model. It does not ask for donations but raises most of its funds from royalty from the sale of Being Human merchandise. Khan has extended Being Human into a successful fashion brand that sells both in India and several stores in Europe and West Asia. Ten per cent of every sale of a Being Human product goes to the foundation. Khan recently picked up a minority stake in travel portal Yatra.com and one rupee from every transaction goes to the foundation.

Manish Mandhana, Managing Director of Mandhana Industries, which manufactures and retails the Being Human apparel line, says it is already a Rs 100-crore brand. "At the front end, it is a lifestyle brand and at the back end, it is a philanthropic organisation. All royalties from the lifestyle brand support the philanthropy we do," he says.

Marketing experts say the Being Human brand helps boost the Salman Khan brand and has slowly succeeded in overshadowing his bad boy image. Despite his successful movie career, Khan was never one of the biggest names in the endorsement business. But lately he has cashed in on his man-of-the-masses image to sell a host of products with mass appeal such as Britannia Tiger biscuits, Thums Up, Relaxo slippers and Rotomac pens. "Salman in most of his films has a Robin Hood image, which he has seamlessly carried into his real life. He actually tries to live the role he plays in films. This makes him a great brand," says Ashish Mishra, Managing Director of brand consultancy Interbrand India.

In the marketing world, the real test of a successful celebrity brand is how he leverages his status outside of his business. Football star David Beckham, for example, is not just known for playing world-class football, but has leveraged his brand to run a successful fashion apparel line, dVb. Experts say Khan is one of the few Indian celebrities who have leveraged their stardom for the future. They see Shah Rukh Khan as an astute businessman, with interests in film production and cricket, and as one of the highest paid actors in the endorsement market .

But, according to them, most of his forays outside acting are shrewd business moves and do not really contribute to building the star's brand.

Similarly, they see Aamir Khan as a social crusader but not a brand with long-term appeal. "There is a shelf life for the values Aamir represents, but he has done it in a serious way (through his films and shows such as Satyameva Jayate). There is more appeal in Salman's way as he doesn't make it boring and preachy," says Interbrand India's Mishra.

With Salman Khan's career on a roll, his brand equity is unlikely to fade soon. All his films in the past two years - Dabangg, Ready and Bodyguard, among them - have been monster Rs 100-crore hits. One of his recent releases, Ek Tha Tiger, beat all earlier films with box-office collections close to Rs 200 crore. But the movie star does not plan to stop at that: he has big plans for the Being Human charity and lifestyle brand.

He is working on an education video for schoolchildren which will be sold at video stores across the country and distributed free to underprivileged children.

He also plans to extend the Being Human brand to the food business by setting up cafes with a leading food and beverages company. A percentage of the revenue from the cafes will go to the charitable foundation. "The dream is that Being Human should outlive Salman Khan. I want to get into a space where people get up in the morning and brush their teeth with a Being Human toothbrush, have toast made with a Being Human toaster, wear Being Human apparel, hang out at our cafes and finally sleep on a Being Human pillow," he says.

Is the dream a bit far-fetched? Not really, says Mishra. "If the branding strategy is well laid out, Being Human and brand Salman definitely have the potential of outliving Salman Khan, the actor."