The nondescript office in Chennai’s Egmore area that houses the Guidance Bureau, the single-window investment facilitation office of the Tamil Nadu government, has never seen as much activity since its inception in the early 1990s as it has over the last 26 months. During this period, foreign direct investment worth Rs 25,683 crore has found its way into Tamil Nadu (mostly in and around Chennai). That apart, projects worth Rs 16,000 crore have been finalised and are awaiting official announcements. Infrastructure investment: A grid separator under construction in Guindy to ease traffic congestion
For M. Velmurugan, Director, Guidance Bureau, and his staff, it has been a period of extended office hours and lost weekends. “We close a minimum of one project worth at least Rs 400 crore every week,” says Velmurugan, who is also the point-person for hard-selling Tamil Nadu as an investment destination.

But Velmurugan prefers to showcase the state of existing investments to highlight Chennai’s competitive edge. Nokia’s India operations, he says, began in January 2006 with just over 500 employees.

Today, its staff strength is 8,000 (its vendors in the Nokia SEZ employ another 15,000 people). In fact, Nokia’s Chennai facility has overtaken the one in China and is now its largest manufacturing facility in the world in terms of volume.

Similarly, Hyundai, which started with a capacity of 100,000 cars in 1996, has expanded its output to 630,000 cars and has designated its Chennai plant its global small car hub. “These expansions are a clear indicator of the extent of competitiveness Chennai offers to investors,” he says with more than a hint of pride.

A strong educational system has been one of Tamil Nadu’s traditional strengths. There are, according to Velmurugan, 333 engineering colleges, 230 polytechnics and over 1,200 industrial training institutes churning out close to 300,000 technically qualified students every year. “Tamil Nadu produces 25 per cent of the country’s engineering graduates.

Moreover, the work culture is very attractive. People here are eager to learn and have a higher sense of loyalty,” says R. Chandrasekaran, Managing Director & President, Cognizant Technology Solutions, which houses about 35 per cent of its 59,000-strong workforce in Chennai. 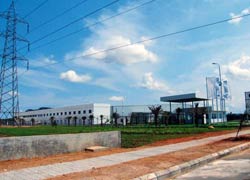 Automotive hub: The BMW plant
“Chennai’s other strength is its connectivity to all parts of the country not just by rail, road and air but also through two major ports, Chennai and Ennore. The former, in fact, is India’s secondbusiest container terminal. Also, undersea cables to Singapore (13.2 terabits capacity) connect us to our mainframes and servers around the world,” says Michael Boneham, President & Managing Director, Ford India.

Ford, which recently announced a $500-million (Rs 2,150 crore) programme to double its capacity and set up an engine manufacturing facility, was one of the first global automobile majors to zero in on Chennai.The city’s other advantage is its low rentals. “Though nearly 16 million square feet (sq. ft) of office space has been absorbed in the city over the last three years, Grade A office rentals in the central business district is just Rs 60-90 per sq. ft compared to Rs 350-600 per sq. ft in Mumbai,’’ points out Ramesh Nair, Managing Director, Jones Lang LaSalle Meghraj, a real estate consulting firm.Chennai scores on the “softer” side as well. “Our culture is more welcoming and people face fewer barriers when making friends,” says Ranjani Manian, Founder CEO, Global Adjustments, a relocation and cross-cultural training firm. “The city has excellent schools and medical facilities, the crime rate is low and there are no communal tensions,” she adds.

Most importantly, the state government is seen as investor-friendly and has been courting investments armed with a huge land bank in close proximity to Chennai.

The flip side of success

The massive inflow of investments and people has, however, begun to take a toll on Chennai’s infrastructure. Power consumption grew 16 per cent in 2007-08. This was accompanied by a fall in hydro-power generated by the Tamil Nadu Electricity Board (TNEB). Result: a shortfall of about 467 MW. In 2008, for the first time in many years, the government announced power cuts for both residents and industries. 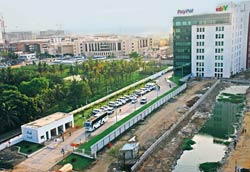 Low office rentals: Grade A office rentals in the city still come cheap
This “regulated loadshedding” and industrial holidays have taken the sheen off Tamil Nadu’s claim of being a power-surplus state. “The shortfall in power supply is a temporary phenomenon. Inconsistent rains in recent weeks have hit hydro-power generation. We are rapidly augmenting capacity and will add about 4,500 MW by 2011, making Chennai power-surplus once again,” says S. Kathiresan, Member, Accounts, TNEB.

The rain gods may have played truant in recent times, but they have been bountiful over the last couple of years. This has allowed the authorities to charge the reservoirs that currently supply 645 million litres of water a day. But experts warn that the situation could deteriorate rapidly if the monsoons fail. “No long-term solution to the city’s water problem has been found.  A desalination plant is coming up, but that is a bad remedy. Interlinking rivers is a good option but it is far from being accepted conceptually. In a way, we are going in a blind alley and there are no plans to stop this march,” warns C.S. Kuppuraj, former Chief Engineer, Tamil Nadu Public Works Department.

Chennai’s infrastructure is also wilting. Traffic snarls are becoming more common despite the government investing heavily in widening roads and on building flyovers and bypass roads. “Infrastructure will always be a challenge though it is not as bad as in other cities. It will always be in catch-up mode,” points out Cognizant’s Chandrasekaran.

Also, residential rentals have steadily increased at 25 to 30 per cent per annum over the last three years blowing a gaping hole in the monthly budgets of middle class residents and forcing many to relocate to the suburbs.

Adds S. Muthiah, noted journalist and historian: “The city’s population has grown three times over the last 10 years but we have failed to move the population out of the city. Attempts to build townships closer to industrial clusters such as Gummidipoondi and Maraimalainagar, near Chennai, have failed.”

The ever-increasing population puts enormous stress on roads, schools and the water and power infrastructure. In fact, he has a rather radical solution to decongest the city: move the political capital out of Chennai and turn the city into a business hub. 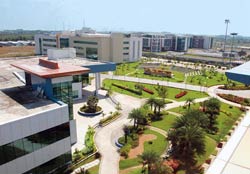 IT hub: Cognizant and other major IT powerhouses are located in the city
The government, for its part, is now promoting Tier II cities such as Coimbatore and Madurai as investment destinations for IT and ITES projects in order to ease the pressure on the state capital and has even been partially successful in its endeavour.

But despite this, it is clear that Chennai’s infrastructure is starting to feel the pressure. Is there any danger, then, of the city going the Bangalore way? This is a genuine concern in the minds of many in Tamil Nadu. But people like Muthiah feel otherwise. “We are clearly heading that (Bangalore’s) way, but we may not actually get there as the state government is aware of the impending crisis. It has already initiated road, public transport and power projects to ensure that Chennai’s infrastructure at least keeps pace with requirements,” he says.

Given the projects on the ground and the stated aims of both the major political parties in the state, some of his optimism is, indeed, warranted.