Unlike most of the new-age start-ups, the founders of mobile analytics company CleverTap are not 20-something fresh college passouts. Anand Jain, Suresh Kondamudi and Sunil Thomas are technology veterans with decades of experience.

When the trio decided to join hands to set up CleverTap in 2013, they were employed with the Reliance Industries-backed media conglomerate Network 18, where they were involved with the group's various Internet platforms such as Moneycontrol.com, Firstpost.com and BookMyShow.com. Studying user behaviour across these platforms was an integral part of their jobs. "When we started understanding users across platforms, we realised there was a lot of scope to re-target the same set of users and convert them into potential customers," says Kondamudi, Co-founder and CTO of CleverTap.

When Kondamudi talks about re-targeting consumers in the online world and converting them into potential customers, he is referring to data analytics. For instance, if a consumer regularly visits Amazon.com to buy premium products, the chances are that during his subsequent visits also the homepage of his app would open up to show the premium brands that are on offer. This kind of consumer targeting is possible thanks to the 4,000-odd engineers who at the back end have complete understanding of consumer usage patterns and serve them accordingly.

While consumer targeting and re-targeting comes to the likes of Google, Facebook and Amazon, the CleverTap trio sensed a lucrative business proposition in offering similar analytics services to the rest of the online world, too. "Most of the online businesses were losing customers primarily because they were not showing relevant content. An online retailer by showing his mass brands catalogue to a premium brand shopper, was obviously putting off the premium shopper. The online world was completely ignoring who its customer was," explains Anand Jain.

The trio, therefore, put together its years of online user understanding to come up with a ready-to-use analytics tool, which enabled online businesses to buy off the shelf and integrate into their business. "By using our tool, the marketers can see what they are selling, get details about the old users as well as the new users," says Jain. Since mobile data analytics already commanded huge interest in the investor community in 2014, the trio didn't have much difficulty in raising the initial $2 million from private equity companies (Accel Partners and Seqouia Capital). However, they decided to go slow with customer acquisition during the initial months and instead focused on fine-tuning their technology.

Their first client, BookMyShow, came quite easily to them, as they had worked for the brand during their stint with Network 18. With over five billion consumer interactions per month, their first client itself gave them a taste of scale. They designed end-to-end customer engagement tools for the website. They tracked the behaviour of each and every consumer, and created customised notifications for them. 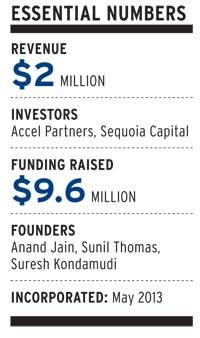 Marzdi Kalianiwala, Vice President, BookMyShow, says that CleverTap has enabled them to take customer management to a new level in the past couple of years. "If a consumer buys a ticket on our app, we are immediately able to interact with him or her with some very targeted messaging. CleverTap's data analytics platform is extremely good."

Jain agrees that their paid client acquisition rate is slow. In a market where data analytics is nascent, he says the conversion from free to paid will take them time. But what the trio can't overlook is that competition is heating up in this space. While the likes of Google are already offering similar services at competitive pricing, there are newcomers such as Appboy, Localytics and Mixpanel and a bunch of others who are vying for a share. The global mobile analytics market is expected to grow from $1.36 billion in 2015 to $4.12 billion by 2020, at a CAGR of 24.73 per cent. But Jain claims that his pricing is the most competitive in the market. "Most of our competitors offer free service only up to 25,000 user interactions per month. By extending it to a million, we are enabling more smaller players to try us out."

The fact that close to 20 per cent of CleverTap's business already comes from the enterprise tier gives Prashant Prakash, Partner at Accel Partners, confidence as an investor. "It clearly shows that the start-up is chasing scale, which is good news." Prakash is also upbeat about the fact that the start-up is not just restricted to India, but has also spread its wings in the US. "Their decision to be a cross-border business impressed us. While the CleverTap product has been developed in India, bulk of the mobile analytics action is happening in the Silicon Valley. It is important for a mobile analytics company to have a presence in the nerve centre." In September 2015, CleverTap got its second round of funding of $8 million (it had initially raised $2 million) from Accel Partners and Seqouira Capital. The company also launched its product at the TechCrunch in San Francisco and thereby forayed into the US market.

CleverTap aims to be a $5-million business by end of 2017. Profitability is still some distance away but the founders claim that growth is their immediate concern. "Even the country's biggest start-up, Flipkart isn't profitable. Whatever we earn, we are going to use for ploughing further growth," says Jain, adding that they are confident they can stay ahead of competition by constantly thinking out of the box.