Cognizant has turned the outsourcing model under Francisco D'Souza

Cognizant has overtaken Bangalore's Wipro to the Number three rank by revenues among IT service firms operating from India. Infosys, ranked second, is next in its sights. Under headman Francisco D'Souza, Cognizant has turned the outsourcing model on its head.

Cognizant's CEO Francisco D'Souza
Sunny Sen
Cognizant Technology Solutions' moment of epiphany came one summery day in July 1998 on Wall Street, New York. Spun off two years earlier from ratings data giant Dun & Bradstreet, or D&B, the company was presenting its plan for a share sale on NASDAQ. At that time, most of its revenues came from its former parent and this had a banker saying: "If Cognizant can be listed, I can take the MIS department of any large US corporation public." MIS was short for management information systems, as information technology systems were commonly called in the 1980s and 1990s.

The sarcasm stung. But the lesson was clear: Cognizant had to stand out in the information technology, or IT, fraternity. It could take the road of high innovation of Microsoft - those were pre-Google days - or the path of operational excellence of, say, International Business Machines, or IBM. Or, it could evolve around a customer-focused model. Francisco D'Souza
Cliched as customer-centricity sounds today, Kumar Mahadeva, the then CEO, and his key lieutenants - including current honcho Francisco D'Souza, who was then head of the US operations - chose to go the extra mile in servicing clients. The New Jersey-headquartered company, with most operations run from Chennai, decided it would not undercut competition on pricing but spend more on client servicing and invest in domain expertise to deliver extra value.

The philosophy matured into the core of Cognizant's business model, helping it to eventually catch up with bigger rivals, who had a head start of at least a couple of decades and were perfecting offshore delivery from India. As a captive of D&B, "we had only one customer and our focus was only technology and how to deliver quality", says Lakshmi Narayanan, Cognizant's Vice Chairman. "But we decided that we will be known for our customer centricity."

At that time, large corporations in the US and Europe needed little pampering to outsource to India, which promised 40 to 60 per cent savings. Such cosseting, potential investors were told, would predicate Cognizant's business model on operating margins in the 18 to 20 per cent range. For context, Infosys reported 26 per cent earnings before interest, tax, depreciation and amortisation, or EBITDA, in 1998/99; two years later, it rose to a peak of 39 per cent as business fixing the Y2K bug poured in.

Read: Cognizant's Chief Strategy Officer on future of IT

A dozen years on, Cognizant has overtaken Bangalore's Wipro to the Number three rank by revenues among IT service firms operating from India. Infosys, ranked second, is next in its sights. For now, there is a considerable gap. Market guidance estimates released by Infosys put its revenues for 2011/12 at up to $7.25 billion; Cognizant has forecast it will close revenues at $6.06 billion in the year to December 2011. 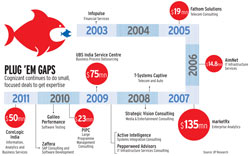 Click here to Enlarge
But this could change dramatically. By the end of the first quarter of 2015, Cognizant is likely to overtake Infosys, on a quarterly basis, according to various estimates. "With +8.3 per cent quarter-on-quarter dollar revenue growth in Q2 2011, Cognizant delivered a strong outperformance over its guidance (+5.7 per cent q/q) and continued its outperformance over Indian IT peers," Bhavin Shah and Jaykumar Doshi, analysts with Equirus Securities, wrote in a report in August. This could change if Infosys makes a big acquisition but the distance Cognizant has travelled is evident: until 2008, Infosys led it by nearly half a billion dollars in quarterly revenues.

'The New Normal'
The Cognizant saga goes beyond overtaking Wipro or Infosys, or perhaps even market leader Tata Consultancy Services, or TCS. The story is how a company less than 18 years old is disrupting a $60-billion business of delivering IT services from India. It signed up 283 new client engagements in the four quarters to June 2011, compared with 128 for TCS, Infosys's 127, Wipro's 182, and 222 for HCL Technologies. In the same period, Cognizant's revenues grew 34.4 per cent versus Infosys's 23 per cent and Wipro's 17 per cent.

We had only one customer and our focus was only technology and how to deliver quality: Lakshmi Narayanan
At the centre of the disruption Cognizant is causing lies its selling, general and administration, or SG&A, expenses, which relate to sales, customer service and marketing. In each of the last three years, the company has spent between 21 and 23 per cent of its revenue on the SG&A count, a percentage share that is double that of some rivals'. President and CEO D'Souza traces this to Cognizant's 'two-in-a-box' model of service delivery - one market-facing person deals with the client and a back-end professional ensures delivery of services.

"We have 300 to 400 clients who give the vast majority of our revenues," he explains. "We have 700 to 800 account managers dedicated to our clients on a day-to-day basis." Mjunction, a Kolkata metal trading firm, started talking to Cognizant in February 2008, when it planned to launch its first e-commerce website, Straightline.in. Amit Khan, who heads IT at mjunction, says a senior Cognizant executive interacted with mjunction's business heads from the very beginning and, at the solution end, another executive, who had run e-commerce projects, was deputed to the Kolkata pitch. Cognizant won the deal beating NIIT Technologies and Sapient. The tech services vendor has also aggressively built its presence with clients such as AstraZeneca, JPMorgan Chase and Sears at the cost of rivals, say industry sources, but details are not available. Click here to Enlarge
Industry veteran Subhash Dhar calls Cognizant's 18 to 20 per cent EBITDA margin "the new normal". "If somebody is growing revenues at 10 percentage points less EBITDA than Infosys, that's where the growth is," says Dhar, who until June was a Senior Vice President and Head (Innovations) at Infosys. He believes software services delivered from India will move to the lower margin bracket unless companies innovate.

At Cognizant, the prevailing view is one of deja vu. D'Souza describes investors' acceptance of his company's lower operating margins as a privilege. "And in return for that privilege, what we deliver back to investors is faster growth than the peer set," he says in a video interview from his New Jersey home. In the last 10 years, the company has grown revenues more than 27 times starting at $178 million and ending 2010 at $4.6 billion, data compiled from the S&P Capital IQ database shows.

At the end of the downturn, the two banks (caught in the 2008 financial collapse) came out like powerhouses: R. Chandrasekaran
Market capitalisation of the company kept pace, expanding 28 times over the period - the biggest gain in the last three years. Today, Cognizant's price-earnings ratio is 23.68 versus 19.85 of Infosys or Wipro's 15.38. Even in the aftermath of the US recession following the September 2008 collapse of investment bank Lehman Brothers, Cognizant was one of the few IT companies whose growth rate stayed in double digits.

While most other companies either contracted or grew in single digits in 2009/10, Cognizant expanded 16 per cent in 2009. The reason: the others had ruthlessly cut costs in the second half of 2008 and first half of 2009 to protect margins. Cognizant kept investing in domain expertise in its new service lines such as consulting, BPO and remote infrastructure management services. It has over 2,800 MBAs working on consulting assignments - four times the number at Infosys's consulting division. "Over the last three years we have doubled our investments," says D'Souza; Cognizant is investing $500 million to expand office space in India.

The Melting Pot
Cognizant straddles India and the countries of its clients more effectively than its rivals. It runs over 7,500 client projects in 40 countries, in nine of which it has its own offices. About a quarter of its 118,000-strong workforce is overseas, most of them in the US and Europe; though HCL Tech has a higher share thanks to its acquisition of AXON in the UK.

Click here to Enlarge
D'Souza, who looks boyish even at 43, is in many ways a symbol of the cultural hotspot that Cognizant is. The son of an Indian Foreign Service officer, he was born in Nairobi, Kenya. Picked by US magazine BusinessWeek among the world's most successful immigrants, he studied in seven schools in Panama, Zaire, New Delhi, New York, Trinidad, Hong Kong and Pittsburgh, before graduating from the University of East Asia, Macau. His first job as a student was as a clerk at a Hong Kong branch of Indian Overseas Bank after which he headed to the Carnegie Mellon University in Pittsburgh, US, for a management degree.

D&B hired D'Souza in 1990 from Carnegie Mellon's Tepper School of Business for a leadership programme designed to give conglomerate exposure - the ratings company had in its fold businesses that today are AC Nielsen, Moody's and Gartner - to its managers. After four years with D&B in Germany, the US and India, the 26-year-old headed to Chennai when a joint venture of his employer asked for a hand to run sales. "They randomly gave me Francisco," recalls Srini Raju, the first CEO of D&B Satyam Software, the 76:24 venture between D&B and the erstwhile Satyam Computer Services."

He was a good mix of West and India. He was a hardworking and ambitious guy even then; there were no timings for him." That hasn't changed much: when Business Today's second interview with D'Souza started at 9.30 a.m. local time in New Jersey on a recent Friday, he had already done four client calls and had another scheduled in an hour.

D'Souza is on the road 18 days a month. "I used to travel quite often to meet clients, but Frank travels much more," Vice Chairman Narayanan told this reporter in an earlier interview, referring to D'Souza. The pace of D'Souza and his top team is matched by how shrewdly the company invests in relationships.

During the 2008/09 downturn, for instance, it had 45 per cent of revenues coming from financial services. President and Managing Director, Global Delivery, R. Chandrasekaran remembers that two such clients were in bad shape, but Cognizant chose not to focus on payments. "At the end of the downturn these two came out like powerhouses."

He (D'Souza) was a hardworking and ambitious guy...; there were no timings for him: Srini Raju
Relationships like these help, since most client sign-ups today, after three decades of outsourcing, are renewal contracts or an extension of a service into another part of the customer organisation. Still, Cognizant believes there is fresh ground to be broken. To ensure that retailers are not affected by a technology blackout in peak season is an example. A solution, branded IntelliPeak, simulates holiday sales - say around Thanksgiving or Christmas - and identifies weak links in the retailer's tech infrastructure. Sixteen retail chains have signed up for it since 2010.

Such solutions are good to have but what will really move the needle, D'Souza knows, will be big bets on technologies which are sweeping the world of business. He has thrown the brute strength of Cognizant behind what he calls the four forces driving the 'Future of Work', a framework crafted by the company's Chief Strategy Officer, Malcolm Frank. These are accelerating globalisation; virtualisation; a millennial mindset (which manifests in mobility, social networks and the millennial population); and cloud computing. "From 2009 to 2020 it is estimated that data is going to grow 34 times. How does a company cope?" asks Frank, suggesting Cognizant has the answer.

A hint of how Cognizant's luck is likely to play out is seen from the eyes of its competition. Customer understanding, acknowledges Sean Narayanan, Chief Delivery Officer of iGATE, is Cognizant's forte. "When I joined iGATE from Cognizant, I used to think that growing at 40 per cent is easy," he says, indicating how well-oiled the sales engine at his former employer is.

For now, D'Souza seems to have figured it out. To be sure, Cognizant is still dwarfed by the likes of IBM and Accenture - and even lags TCS by some distance - but for now it is leading the growth pack in IT outsourcing.