State-owned banks now mean business and this is amply reflected in their dramatically improved rankings in this year’s survey of best Indian banks.

In your next survey, we will be in that slot,’’ declares T.S. Narayanasami, Chairman and Managing Director, Bank of India, referring to Indian Overseas Bank’s pre-eminence among PSU banks in the Business Today-KPMG survey for 2006-07. He is not moaning IOB’s rise from the seventh position in 2005-06 to third among the 35 large banks in India. In fact, he is glad about it, since he headed the bank during the year it shone in the survey. And for the PSU pack, too, it’s a big leap forward. The highest ranked PSU Bank before this survey was Corporation Bank, which clocked in at #6 last year; it has slipped to #12 now.

S.A.Bhat (third from left), CMD, IOB
In June 2007, Narayanasami moved to Bank of India, which has climbed to the 15th place from #24 last year. He is determined to pip not just his PSU peers to the post but private banks as well. And he has numbers on his side. BoI posted a 100 per cent rise in net profit in the second quarter of this financial year only to do an encore in the following quarter. “For the first time a PSU bank has reported 100 per cent rise in net for two successive quarters,” he beams. How does he do it? “I scout for business after keeping my social banking commitments.

The balance corpus available is used for strengthening the bottom line.” As to the challenges ahead, he says: “We have no issues, really. We are encashing our global visibility and reach. Our credit growth has been robust and net interest margin has grown very impressively.” These, along with its all-round efficiency and strong commitment towards the stakeholders, he feels, will make BoI the best-performing PSU bank in the country.

Narayanasami’s successor and present CMD of IOB, S. A. Bhat, believes his bank’s core strength is its home-grown IT technology platform. This is what differentiates IOB from the other PSU banks. Bhat is confident that IOB will stay the course and stave off competition from private and foreign banks as well. “Even if the financial sector is opened up, I don’t think foreign banks will make a beeline for India immediately. When they do come, it will take time for the competition to mature. By then, PSU banks, too, will have started consolidating,” he says. Bhat is aware that the youth is drifting towards next-generation banks; so, he is also trying to win them back.

But the gambit is slightly different for Union Bank of India (UBI), which has climbed 10 places to #8 this year. Its Project Nav Nirman, launched last year, focuses on technology and business processes to reach its customers in the quickest possible time. “We have invested a huge amount of time and money in reskilling people so that when a customer visits a branch or reaches us over the internet or ATM or through phone, he gets a similar kind of service,” says CMD M.V. Nair. M.B.N. Rao, CMD, Canara Bank
Nair had set one-and-ahalf to two-year timeline for the changes to come through—it is working on things like offering a committed timeline for services like home loan or car loan deliveries in 3-4 days failing which it will pay penalties; changing the branches into sales and services outlets and ushering in 100 per cent core banking solution across all (2,300-odd) branches, etc. He is certainly surprised by the BT-KPMG findings. “I did not anticipate this. The real results for our efforts should come in 2007-08. Your next survey will rank UBI higher.” Nair, who is the former CMD of Dena Bank, says his ambition is to make UBI a world-class bank by 2009.

Equally impressive is Indian Bank’s climb, from 20th spot to the #10 place in the overall rankings and fourth among PSU banks. The dramatic surge in its ranking has come about in its centenary year. CMD M.S. Sundara Rajan is proud that his bank remains a common man’s bank—it did not revise interest rates when others did in February 2007. “Yet, our net interest margin is 3.70 per cent as of March 2007,” he smiles. How did he pull it off? “When others were busy mobilising highcost deposits, we went about disbursing loans with better yields,” he says. 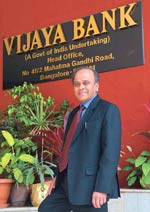 P. Mallya, CMD, Vijaya Bank
In micro-credit, for which the bank has an exclusive branch, the average rate of recovery is 99.5 per cent. Its “common man” strategy reveals unending business opportunities. The CMD says only 40 per cent Indians have access to banking; this means there’s massive room for growth towards the base of the pyramid and that’s the market for his bank to tap.

Two factors, Sundara Rajan explains, spurred Indian Bank’s growth. One, the run-up to the IPO in February 2007 brought about tremendous changes in the bank’s business style and a sense of increased accountability to shareholders. Two, before he took over in June 2007, Sundara Rajan was the bank’s Executive Director, and participated in all important decisions that his predecessor took. “There was a unity of thought and action. I did not tinker with what my previous Chairman did. There was no need to.”

T.S. Narayanasami, CMD, Bank of India
Mallya places more faith in men than machines. “The person behind the machine is more important than the machine itself. When private and new generation banks arrived on the scene, it was generally thought that they would eat into the businesses of PSU banks. But 75 per cent of banking is still routed through PSU banks. But it’s good that the private banks are there. Their presence has actually spurred the PSU banks to improve their quality of services,” he says.

There are several PSU banks, including some heavyweights, that have fallen in the 2006-07 rankings. At the bottom of the list is UCO Bank, down three positions from #32 last year. It is closely followed by Central Bank of India, Dena Bank, the State Bank of Indore, and others. But the most noteworthy fall has been by the big three—State Bank of India, Canara Bank and Punjab National Bank. At #29, SBI, the largest bank in the country is down 12 places, followed by Canara Bank, which has fallen 9 places to finish 23rd and PNB, which has slipped seven slots to the 20th position. That some of the big private sector and foreign banks like ICICI Bank, Standard Chartered and Citi Bank, too, have slipped in their rankings, though not as sharply, should provide some comfort to the PSU banks. M.S. Sundara Rajan, CMD, Indian Bank
Canara Bank will bounce back, says the CMD of a rival bank. In December 2007, the bank embraced a new logo in a symbolic attempt to shed its stodgy past and to signal that it is changing with the times. The bank’s CMD M.B.N. Rao is surprised at the rankings, pointing out that business per employee has risen to Rs 5.62 crore from Rs 5.04 crore a year ago. It is also earning more on its corpus following the recent rebalancing of its business portfolio. It has reduced both high-cost deposits and low-yielding corporate loans.

Central Bank of India’s CMD H.A. Daruwalla is satisfied that her bank has performed well in the last three quarters. “We have been on the right trajectory and are keeping an eye on the quality of assets.” The bank’s net was up 29 per cent at the end of the December quarter. She has introduced an HR plan under which performing officers can move up the hierarchy by jumping a level.

Consolidation is the key

Nair,CMD, UBI
However, several challenges remain for PSU banks, including stiff competition from private banks and issues of scale that will become critical when the sector is expected to be thrown open next year.

“We are never on a common platform. While private banks have to follow only Reserve Bank of India guidelines, we have to, additionally, follow those of the government,” Daruwalla says and also points out to the hidden costs that many private banks slap on customers. “PSU banks are doing tremendously well despite all odds. Value unlocking and consolidation will result in a further improvement,” she feels. Vijaya Bank’s Mallya agrees and says India needs not more than six or seven major PSU banks, as against 27 now. “Consolidation should happen because size does matter. But it should not be the merger of a strong bank with a weak bank. A strong bank should merge with another strong bank.” What will happen to the weaker banks? “Private sector banks will hopefully take care of them,” he laughs.

Clearly, new generation banks have an edge over the PSU ones. The average employee age in private sector is 29-30 years, while it is 48 in PSU banks. “As you grow in age, your reflexes slow down. They cannot easily handle technological changes as youngsters can. If I am asked to ride a two-wheeler now, I cannot manoeuver it the way I did in the prime of my youth,” says Mallya. The point seems to have already been taken by many PSU banks.