Business Today’s list of India’s Most Powerful Women in Business has honchos from the hurly-burly world of financial services all over it. Outside the list too, women are calling the shots, be it wealth management or equity research or hard-nosed broking.

Women on Wall Street, which somewhat fittingly condenses to WOWS, is an annual conference sponsored by Deutsche Bank since 1995. The objective of WOWS is to further career and business opportunities for women in the financial services sector.

Every year, thousands of professionals from Wall Street firms and allied businesses get together for an evening of networking and fun. Last year, for instance, some 2,100 professionals attended the 12th WOWS conference. This year’s summit will take place in mid-October, with the Chairman & Chief Executive Officer of Sara Lee Corp, Brenda Barnes, slated as the keynote speaker. Back home, there’s no Women on Dalal Street, not yet. But that doesn’t mean there are no women on Dalal Street. WODS may not sound as sexy as WOWS but, if you consider the increasing number of women in the hitherto testosterone-fuelled world of financial services, there’s a real case for the divas of the world of Indian financial services to get together— if not for career development, at least to have a blast.

The collective intelligent quotient—and the collective pay-packet!—packed in that room would indeed be a mindboggling number.

Consider: Of the list of 25 Most Powerful Women in Indian Business, 12 of them have earned their spurs in the hustle and bustle of the highgrowth, high-energy business of the Chief Commissioner of Income Tax as a component of the world of finance—which it is in a way— you have 13 of them from this sector). 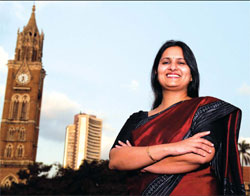 They’re head honchos of banks—commercial and investment— insurance companies, asset management mega-corps, housing finance behemoths, and even at the market regulator (the Securities & Exchange Board of India—SEBI) and the central bank (the Reserve Bank of India).

They’re cutting deals, raising resources, and monitoring markets and currencies with élan, and without much ado.

One of them has her name etched in history books as the first Indian woman to graduate from Harvard (that’s Naina Lal Kidwai); another would have entered the record books (if record books were keen on such feats) for the number of deals she pulled off in 2007—and more importantly, for their jaw-dropping values (that’s Manisha Girotra, whose firm UBS Securities has closed nine transactions worth around $20 billion so far in the year).

Unsurprisingly, the ICICI Group has its indelible mark on the listing, with four women from the banking conglomerate finding themselves on the list, including one newcomer in the guise of Group CFO Vishakha Mulye. It’s unsurprising because the ICICI Group is known for its woman power—at last count, some 30 per cent of the workforce were women.

But it isn’t as if women in financial services are confined to the BT list of 25, or to the ICICI Group. Step on to Dalal Street, or into the commercial districts of Mumbai, and it won’t be difficult to bump into fund managers, wealth managers, insurance company hotshots, brokers, equity research heads and corporate finance chieftains—all women.

Falguni Nayar is just one of them. August 16, 1993, is a day Nayar’s unlikely to forget, ever. It was the day her twins turned three. Once the birthday party was over that evening, she duly trooped back to work at A.F. Ferguson, an accounting firm.

“At about halfpast-seven, I got a call with an offer to head Kotak Mahindra’s mergers & acquisitions business,” she says with a laugh.

Fourteen years on, after stints in the UK and the US, Nayar, 44, today is Managing Director, Kotak Mahindra Capital Company (KMCC).

So, what is it that attracts women to financial services? Two possible answers are: The intellectual challenge; and, of course, fat salaries, which are only getting fatter in a booming market.

But it may just be that the former matters more in the case of many of these women. As Sutapa Banerjee, the 42-year-old Senior Vice President & Head (Private Banking, India), ABN AMRO Bank, puts it: “I think my biggest strength is an ability to think and execute. I like to make things happen,” says the MBA from XLRI (1989).

It was in the mid-90s that Banerjee decided to train her sights on the banking sector. That was still a time when you wouldn’t spot too many women at the top in finance. “Earlier, there were a lot of women at senior levels in professions like medicine, market research and advertising,” says Sangeeta Purushottam, Head (Institutional Business), Religare Securities.

Yet, there are those women who have sworn by this sector even before the era of liberalisation (pre-1991). Take Ashu Suyash. After finishing her chartered accountancy in 1988, Suyash was keen to get into banking. She joined Citibank. “There were certainly fewer women in financial services then.

It was natural for parents to speak to their daughter about medicine and advertising, but not so much about a career in finance,” points out Suyash. The fire in the belly burned bright, and Suyash was pretty clear she wanted to head an organisation. She was pretty sure of getting there, too. Suyash did, in 2003, when she took charge as MD & Country Head of Fidelity Fund Management in India.

Clearly, the number of opportunities has today increased manifold. “I think we are lucky to be around at a time like this,” says Shahina Mukadam, Head (Research), IDBI Capital. Mukadam, 43, a chartered accountant, thinks the entry of foreigners in the financial services space has transformed the financial services landscape. “The way I see it, the rush of talent into markets is the result of a combination of the entry of overseas players with the fact that the sector has become extremely professional.Besides, it is a sector that is rewarding to be in.”

That, of course, is a big factor contributing to the hustle in financial services. But it isn’t the only one. From the employer’s point of view, hiring women might just have its own advantages.

For instance, their interpersonal and listening skills could prove handy in dealing with customers and cutting deals. “I think women are very good at handling customers. This is really because they are calm and logical,” thinks Nayar. Multi-tasking is another skill that most women speak passionately about and they maintain that it is a women’s forte.

Purushottam agrees that a lot of emphasis needs to be placed on nontechnical skills. “I realised the importance of people skills in the first four years from the time I finished my MBA. Dealing with people accounts for a large part of one’s career. Technical skills can take you only up to a point,” she adds. Adds ABN AMRO’s Banerjee: “Women adopt a more holistic approach towards their workplace. I think they are better at lateral thinking.”

Women today are no longer strangers to a billion-dollar transaction. “A few years ago it would have been hard to think that one could be involved in a $2.5-billion IPO (initial public offering),” says Nayar, referring to the public offering of real estate developer DLF Ltd.

But all the Girotras, Kidwais and Kochhars notwithstanding, the world of financial services is still at the end of the day male dominated. At times a few of these women find themselves pitted head-on against their husbands! Nayar’s husband is Sanjay Nayar, Citi’s CEO for India and Area Head (Bangladesh, Nepal and Sri Lanka).

UBS’ Girotra inevitably has to compete for business with husband, Sanjay Agarwal, Managing Director and Head (Investment Banking), Deutsche Bank. Nayar points out that respecting each other’s privacy becomes critical. “Yes, we compete with each other, though we have handled it well. Most importantly, our organisations have trusted us. It is important to play the game fair and straight.” At the end of the day, it’s all about winning, and India’s women in financial services have begun to score with delightful monotony.