Indians are travelling more than ever before and have access to the best of dishes globally. Their expectations of Indian restaurants have risen too.

Diners at MEGU, a restaurant at The Leela Palace New Delhi, which serves exotic Japanese cuisine <em>Photo: Vivan Mehra; Model: Bobby(L), Karma Model Management</em>
Goutam Das
The best was reserved for the last. The 60 members of Chaine des Rotisseurs, an international gastronomic association, had lip-smacked on Maine lobster with Sevruga caviar, seared black cod, Wagyu tenderloin and cleaned up bottles of vintage wine. Finally, it was time for dessert.

Just then, the majestic chandeliers in the banquet hall of The Leela Palace Bangalore, where the feast was held last October, went dark. As the startled guests wondered if the power supply had failed, the closed doors of the hall slowly opened. Music filled the air and spotlights came on in the next room - to reveal rows and rows of chocolates, pastries, cakes, cheese and nuts, honey, single malts and cognac.

"It was dramatic. It was a complete sensory experience," says Aslam Gafoor, a member of this elite club and General Manager of Marketing at Weber-Stephen Barbecue Products India. "A very high bar was set for such dinners that day," he adds. Top hoteliers now often talk of "staging an experience" and "shaping the atmosphere" at their establishments. These are becoming crucial elements in their bid to wow the Indian gastrocrat, who has been growing more and more sophisticated. Indians are travelling more than ever before and have access to the best of dishes globally. Their expectations of Indian restaurants have risen too.

"There are international brands in India - there are luxury cars, luxury jets, there is luxury banking. The rich also want to dine in places that serve luxury food," says Vineet Bhatia, the first Michelin-starred chef from India. Michelin Stars - for restaurant quality - are awarded by French tyremanufacturer Michelin. The award is, perhaps, the most well-known benchmark for excellence in the culinary world.

Restaurants are therefore stocking up everything exotic from caviar to rare mushrooms, besides expensive wines. Dharmen Makawana, Executive Chef at The Leela Palace Chennai, says the hotel's restaurants have all the products that can be considered luxury. Recently, two diners at one of the hotel's restaurants finished two pots of caviar between them - each 30 gm pot costs around Rs 15,000. High-end restaurants traditionally targeted businessmen.

Now, there is a new breed of luxury consumer - the professional with high discretionary spending ability. "They are the game changers for luxury restaurants. They are more frequent visitors. Not all can cook at home because both husband and wife work," says Gautam Anand, Vice President of Pre-Opening Services at ITC Hotels.

Q&A | India must come to terms with her luxury cuisine: Gautam Anand 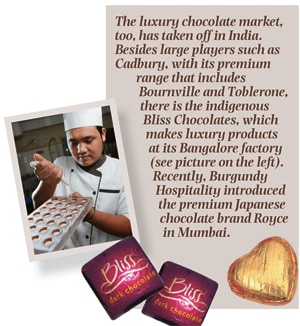 Luxury dining has existed in India at least since the Mauryan dynasty. Anand, a keen historian, cites one of Emperor Ashoka's edicts, passed after he attained dhamma and became a practising Buddhist. The edict bans animal slaughter. Previously, his kitchen used to be full of birds and animals to be curried, peacock and deer in particular.

"The first golden age was the period of Ashoka. The second was the Mughal period, when the world recognised there was explicit luxury in this nation," says Anand. However, India had no written culinary tradition and many recipes must have been lost as they were orally transmitted from master chefs to their sons. Also, recipes from the royal kitchens did not reach common folk. "The class and caste system became important," he adds.

CASTE ASIDE
While ITC Hotels has been attempting to reconstruct some of these historical recipes, which it calls farmaishi (custom-made) cuisine, luxury food has become more accessible now that foodies in cities are hardly bothered about the caste of the chef preparing it.

"In traditional Hindu India, food was believed to have important moral and spiritual properties, and its preparation was deeply intertwined with the practice of the caste system," says Paul Rozin, a psychologist at the University of Pennsylvania, who studies human food choices. "That system discouraged restaurant eating because while doing so, Indians would have to worry about the caste of the chef who prepared it. But I would think those unencumbered by the caste system would have been very open to new types of foods and eating experiences. India has one of the world's great cuisines, which provides a solid base for exploring new things."

That exploration has begun. And "staging an experience" goes beyond the dish and its price. It starts with the supply chain. Chefs want to know where their raw material is coming from and keep an eagle eye on quality. They trust only a few suppliers.

One such is Mohammed Ansar, 28, a fourth-generation meat merchant who supplies to four major hotel chains across the country. His forefathers delivered meat to the kitchens of Jaipur's Maharaja Sawai Man Singh II. He sources lamb from Rajasthan - the state arguably produces the best meat in the country. He ensures the lambs are of a particular age and weight - each carcass never weighs more than eight kg and the legs not more than one to 1.3 kg. That's the sort of meat which tastes best. 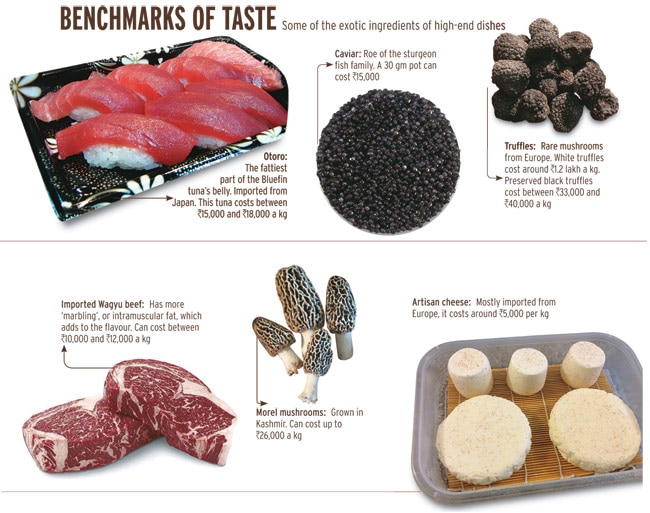 While quality of produce in a dish matters, the decor of the restaurant does too. At Ziya, the Indian restaurant at The Oberoi, Mumbai, the jaalis (screens) installed are all gold. "The display kitchen has gold tiles. The cutlery is gold polished. For an Indian, gold is the most important benchmark of quality," says Vineet Bhatia, who consults at the restaurant. Of course, the way the customer is served is equally crucial. "Staff members are required to wash their mouths before they go up and speak to customers. The guest never sees this.

Luxury is attention to detail," he adds. Matthew Cooper is the spikyhaired, fast-talking general manager of The Marriott in Bangalore. He too has an eye for detail. In his luxurious Italian restaurant, Alto Vino, waiters wear black ties, white shirts and white aprons. "I have hired sexy chefs," he says with a smile. "The waiters are good looking, they have gorgeous bodies. You have to know how to shine. We style everything, from the words they use to how they hold their hands." And indeed, the executive chef of the hotel, Raheel Ahmad, does look athletic with broad shoulders. He speaks softly, with an occasional artistic gesture of hands.

A charming chef can sell far-out innovation. Celebrity chef Manish Mehrotra had Tandoori Foie Gras on the menu of Indian Accent, an upmarket Delhi restaurant. Foie Gras is a French delicacy made from fattened goose liver - a Parisian might squirm at such fusion. But then, all dishes at Indian Accent come with a twist and it has consistently bagged top awards.

At Bangalore's independent restaurant Caperberry, entrepreneur-chef Abhijit Saha has long used molecular gastronomy techniques - the application of scientific principles to cooking - to bring about what he calls the "intellectual value" of food. "Our tasting menu is an experience of luxury," he says. Customers, for instance, can start with Nori-wrapped Norwegian Smoked Salmon that is served with salmon roe before proceeding to Cauliflower Espuma, a dish served with black olive powder and truffle oil, while a slow cooked Lamb Roulade has sweet maple wood smoke infused into it right before the customer.

More and more Indians are being seduced by avantgarde dishes. Pune-based Shantanu Ghosh describes himself as a traveller, foodie and gearhead - he is the Vice President and Managing Director of India product operations at Symantec, an Internet security software company. He makes 15 international trips a year and benchmarks Indian restaurants with the world's best. He is a difficult man to please but was particularly impressed by Bhatia's contemporary twist to Indian food at Ziya - Grilled Lobster with Broccoli Khichdi that comes sprinkled with sour cocoa powder, Wild Mushroom Khichdi with Makhni Ice Cream and Chicken Tikka that was served with Saffron Upma and covered in a gold foil. 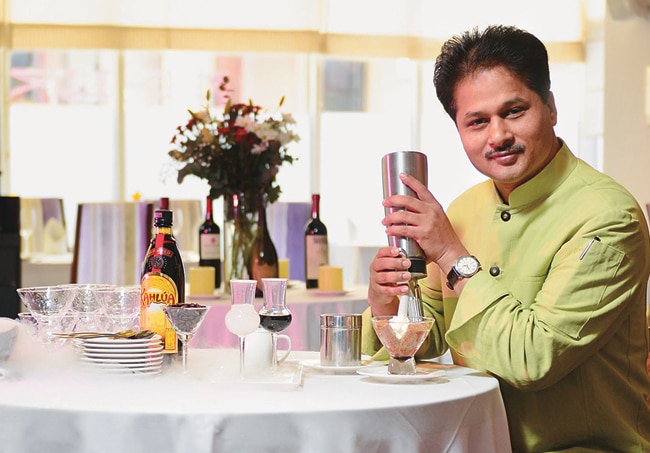 Our tasting menu is an experience of luxury: Abhijit Saha, chef, Caperberry restaurant, Bangalore Photo: Nilotpal Baruah
Bhatia says footfall at Ziya has increased over the past four years. Edo, the Japanese restaurant at ITC Gardenia in Bangalore, one of the city's most luxurious restaurants, begun in 2010, is already earning profits. But luxury chains still face challenges. Fine dining is a tiny market in India, and much needs to be done to broaden its appeal. A report by The National Restaurant Association of India released this year says fine dining today forms just four per cent of the Rs 12,785-crore chain restaurant market. The vast majority of Indians, no matter how wealthy, still remains wary of spending on luxury food, says Caperberry's Saha. "We like to spend on gold, durables, investments, rather than instant gratification - you cannot show off the food you've eaten to others," he adds.

But change is in the air. In 2007, for instance, Deepak Ohri, CEO of Lebua Hotels and Resorts, an international luxury hospitality company, conjured up the "one million ($30,000) Thai Baht meal" at his Bangkok hotel. He flew in Michelin-starred chefs to cook exotic fare for 15 of the world's super-rich. There were no Indians among those who patronised this indulgence. "Today, there will be Indians who can spend that money," he says on the phone from Bangkok.

Q&A | Indians willing to spend more on dining: Deepak Ohri
Indeed, about a year ago, he was planning another outrageous move - setting up the world's most expensive restaurant in, of all places, Delhi. A meal for one here would have cost $400. It did not materialise, but Ohri is not giving up.