Stocks in sectors benefitting from FDI to give good returns

The government allowed 51 per cent foreign direct investment in multi-brand retail and 100 per cent in single-brand retail. This led to a rally in stocks of retail companies. Here's how reforms will impact stocks in other sectors where measures have been announced.

Rahul Oberoi/Money Today
The BSE Sensex rose 8% in September, its best monthly gain since January this year. The trigger was the announcement of a spate of reforms by the government.

Foreign institutional investors, or FIIs, cheered by investing a net Rs 19,262 crore in September in stocks as against Rs 10,804 crore and Rs 10,272 crore in August and July, respectively.

"The Sensex closed above 19,000 mainly on the wave of positive sentiment due to reforms announced by the government. The liquidity injected by FIIs through consistent buying in the past few sessions also played a part. We believe a level of 20,000 is likely by December if the reforms continue," says K Subramanyam, assistant vice president, institutional research, Asit C Mehta Investment Intermediates.

While the stock indices may rise overall, let's see how the reforms will impact sectors where they have been announced.

According to a monthly report from HDFC Securities issued in October, the move will allow global firms such as Wal-Mart set up shop in India. This could transform India's $450-billion retail market. Mohit Modi, director, equity research, CRISIL Research, says, "We expect that the decision on 51% foreign direct investment in multi-brand retail will result in an investment of $2.5-3 billion over the next five years."

Market experts are positive on Pantaloon Retail and Shoppers Stop.

Pantaloon Retail:
The company grew sales by 30% between 2007 and 2012.
Nitin Jain, head, capital markets (individual clients), Edelweiss Financial Services, says, "A strategic foreign partner could provide capital to resolve its debt issues. It could improve store management." Since the start of financial year 2012-13 till October 2, the stock has risen 40% to Rs 214. It is trading at a price-to-earning, or PE, ratio of 17.39, as against the industry P/E of 26.38.

Shoppers Stop:
Shoppers Stop is another successful retailer with 51 stores spread over 3.2 million square feet in 23 cities. A foreign partner could provide the company expertise in improving the efficiency of operations, including the back-end.

Mehta of Fullerton Securities says, "We think rampup of new stores and better consumer sentiment in the festival season in the second half of the year will lead to good performance of the stock."

49% is the stake that foreign airlines are allowed to buy in Indian carriers under the government approval route.

The government has allowed foreign airlines to buy 49% in domestic airlines. This is expected to bring in the much-needed capital. 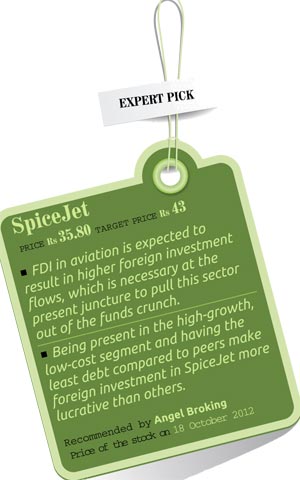 Rajesh Kothari, managing director, Alf Accurate Advisors, says, "FDI in aviation is just one of the steps for turning around the aviation sector. We require more reforms for rationalising taxes on aviation fuel."

Rakesh Goyal, senior vice president, Bonanza Portfolio, says, "The news has cheered aviation stocks. However, investors are waiting to see concrete benefits of investing in these stocks. This is because aviation companies are under a lot of debt, which raises questions about how keen foreign airlines will be to invest in them." At the end of financial year 2011-12, Jet Airways had a debt of Rs 9,295 crore, followed by Kingfisher Airlines (Rs 8,719 crore) and Spicejet (Rs 750 crore).

Market experts are positive on Spicejet.

Spicejet:
"Despite the depreciation of the rupee, the company managed good sales and profit numbers in the quarter ended June 2012. Hence, we are positive on the stock," says Goyal. It had suffered losses in five quarters preceding the June quarter.

OIL & GAS
The government increased the price of diesel by Rs 5 per litre and capped the number of subsidised LPG cylinders per family to six per annum. Aviral Gupta, fund manager, equity, Indiabulls Mutual Fund, says the moves are positive for both OMCs and upstream companies in the near term. Experts are positive on the Hindustan Petroleum Corporation (HPCL) stock.

HPCL: The stock has risen 27% since the start of the year till October 4.

"HPCL will be the biggest beneficiary of these decisions as marketing accounts for a far greater share of its total revenue compared to refining. The stock is available at a lower-than-replacement value, which gives an opportunity to investors," says Rikesh Parekh, vice president, equities, Motilal Oswal Securities. A group of ministers has finalised a new pharmaceutical pricing policy on the basis of market-based weighted average prices for all the drugs which have a market share of more than 1%.

Under the policy, the government will control prices of 348 medicines sold in 654 formulations as specified in the National List of Essential Medicines 2011. According to a Karvy Stock Broking report, this will impact companies in the premium-pricing band the most. Multinational companies, in particular those that have a pure-domestic play such as GlaxoSmithKline Consumer Healthcare and Sanofi India, would be impacted the most.

Companies such as Dr Reddy's Laboratories, Sun Pharmaceuticals, Lupin, Ranbaxy Laboratories and Cipla would be impacted to a lesser extent due to their large exports.

"Companies with strong research and development are going to benefit in the long term. Companies like Dr Reddy's Laboratories, Sun Pharmaceuticals and TTK Healthcare can give decent returns over a period. If there is a price fall, investors can enter these stocks in a phased manner," says Mathews.

Since the start of the year till October 4, the share prices of Dr Reddy's Laboratories, Sun Pharmaceutical and TTK Healthcare have jumped 10%, 42% and 14%, respectively.

50% is the short-term outstanding liabilities of state electricity boards which will be taken over by state governments.

Under the scheme, 50% short-term outstanding liabilities will be taken over by state governments and the balance 50% will be restructured. Experts say this will benefit both lenders and power companies in the long term.

Sanjeev Panda, research analyst (Institutional equity), Sharekhan, says, "The bailout package will be a breather for the distribution business in India. It will ease the stress on balance sheets of SEBs, which are an integral part of the power value chain." Panda is positive on CESC and PTC stocks with a target of Rs 405 and Rs 82, respectively.

CESC:
The Calcutta Electric Supply Corporation, or CESC, is an electricity generating company serving the area administered by the Kolkata Municipal Corporation. In addition to the city of Kolkata, it serves parts of Howrah, Hooghly, 24 Parganas (North) and 24 Parganas (South) districts of West Bengal. The stock has risen 76% to Rs 331 since the beginning of 2012 till October 5.

PTC India:
This zero-debt company is one of the key beneficiaries of the SEB reform package.

The management expects the outstanding amount of Rs 1,000 from Uttar Pradesh and Tamil Nadu to be recovered when tariff increases and operational changes improve the financial health of their electricity boards.

An Edelweiss Institutional Equities report says recovery of dues may be expedited as benefits from reforms trickle in. The stock can touch Rs 90 in the next few quarters. On October 8, it was at Rs 39.