Budget 2013: What does the Food Bill mean for govt's finances?

The National Food Security Bill has the backing of Congress President Sonia Gandhi, and the government aims to table the Bill in the Budget session of Parliament.

About 900 km away, Sheikh Mehboob is in a slightly better situation - but only slightly. Mehboob earns up to Rs 6,000 a month as a construction worker in Andhra Pradesh's Ranga Reddy district. He says nearly two-thirds of his income is spent on food. The balance goes towards rent for the single room he lives in with his mother, wife and three children, and on medicines. How do they get by? The 20 kg rice they get from the ration shop every month helps. "Still, it is inadequate for our family of six," he says, as he waits in a queue outside a fair-price shop. "We have to often buy up to 30 kg rice from the open market at Rs 35 to Rs 40 per kg."

Sunderaj and Mehboob are among the millions of poor people across the country who benefit from the food subsidy and other welfare programmes of the central and state governments. Now, the Centre wants to go a step further. The United Progressive Alliance (UPA) government plans to enact legislation that will confer a legal right on the poor to get subsidised foodgrain. 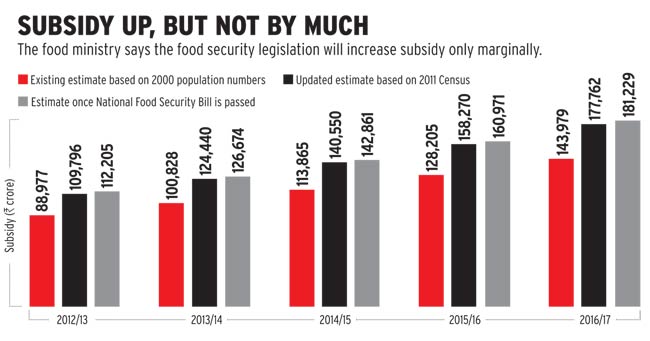 The National Food Security Bill has the backing of Congress President Sonia Gandhi, and the government aims to table the Bill in the Budget session of Parliament. The Bill has been in the works for the past couple of years, but there is greater urgency now to push it through Parliament as the government faces general elections by May 2014. The extra cost should not be seen as a financial burden but as an excellent investment: Jean Dreze
Critics, however, say the proposed law will increase the already high subsidy burden. Rising food subsidy could worsen the government's finances, especially at a time when the economy is growing at its slowest pace in a decade. The Centre's food subsidy has more than tripled in the past six years, from about Rs 24,000 crore in 2006/07 to an estimated Rs 88,977 crore in 2012/13. The sharp jump is the result of consistent increases in the cost of procuring and distributing foodgrain while selling prices remained almost unchanged.

The overall subsidy burden has risen as well, and at a pace faster than the increase in overall government spending. Since 2004/05, when the UPA presented its first Budget, total subsidies on oil, fertiliser, food and other items have increased four times to Rs 1.93 trillion (one trillion is 100,000 crore) in 2012/13. During the same period, the government's total expenditure has grown 2.9 times. But, while measures such as an increase in diesel prices suggest that the government aims to pare down oil subsidies, there is no indication of any intent to contain food subsidies.

Food Minister K.V. Thomas, however, dismisses suggestions that the proposed law will impose a severe burden on the exchequer. "The implementation of the food security legislation will not mean a substantial increase from the existing subsidy bill," he told Business Today.

The food ministry says existing subsidy estimates are based on the 2000 population numbers and need to be updated according to the 2011 Census. It maintains that, taking into the account the 2011 census, food subsidy will be Rs 1.24 trillion for 2013/14 under the current welfare programmes. The subsidy will increase only marginally, to Rs 1.26 trillion, if the food security legislation is implemented (see Extra Burden? Not Much).

"The extra cost, which is very moderate, should not be seen as a financial burden but as an excellent investment," says economist Jean Dreze. He was part of the team which drafted an early version of the food bill for the Sonia Gandhi-led National Advisory Council (NAC).

N.C. Saxena, a member of the NAC, says that, if higher subsidy is the main concern, selling prices could be raised from the current proposal of three rupees per kg for rice, and two rupees per kg for wheat. "Most poor people would not mind buying foodgrain for five to six rupees per kg," he says. "What should be ensured is quality and certainty of foodgrain."

There are many other issues as well that the government will have to settle before the food security legislation can be passed in Parliament. The Standing Committee on Food, Consumer Affairs and Public Distribution, in a report submitted last month, made several recommendations which the government may not agree with.

The Bill proposes to include up to three-fourths of rural folk and half of the urban population as beneficiaries. It says that 46 per cent of rural and 28 per cent of urban beneficiaries will be 'priority households'.

Food Minister K.V. Thomas
Individuals from this segment would get seven kg of grain per month with rice, wheat and coarse grain costing them three rupees, two rupees and a rupee per kg, respectively.

The remaining beneficiaries, or the 'general households', will get at least three kg of grain at half the price the government pays to farmers to procure grains. The government's calculation of the subsidy bill at Rs 1.24 trillion for 2013/14 was based on this.

However, the panel recommends removal of any distinction between the beneficiaries. "So, the entire 67 per cent (the rural and urban beneficiaries put together) will now become the priority sector as per the panel," says Thomas. If implemented, this could substantially increase the food subsidy. Also, the very poor who at present get benefits under the Antodaya Anna Yojana will end up getting less than the 35 kg of grain they get now if the committee's suggestions are accepted.

Thomas hints that the government plans to retain the scheme as it is. Thomas admits that the biggest challenge before him is to build a consensus on the proposed law. The first test will be on February 13 when food ministers from all the states meet in New Delhi. What emerges from the meeting will determine just how the UPA government fulfills its promise on food security.
Published on: Feb 13, 2013, 12:00 AM IST
Posted by: Navneeta N, Feb 13, 2013, 12:00 AM IST