From field to fries

The story behind made-in-India MacFries is an epic in the annals of potato farming and took almost a decade to script. The nine-year saga is full of heartbreak and pain, but it is also a remarkable success of agronomy in India. Kushan Mitra goes into the details. 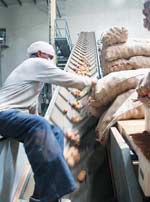 Harvested potatoes are transferred to McCains factory in Mehsana
Mcdonald’s launched in India in 1996, and in the years that followed, the world’s largest fast food chain established with its partners the most impressive cold-chain in the country. But until August 2007, every serving of MacFries came onboard a ship. Then, a process that McCain Foods, McDonald’s largest supplier of fries and the world’s largest potato processor—three per cent of the world’s potatoes pass through McCain factories—began in 1998 came to a close. The first India made MacFries made it onto the menu. The nine-year saga is full of heartbreak and pain, but it is also a remarkable success of agronomy in India.

There are over 150 McDonald’s outlets in India, which are set to increase to 200 by the end of 2009. These outlets are expected to consume 1,200 tonnes of lettuce, 100 million buns and 3,500 tonnes of potatoes, of which two-thirds will be MacFries. And chances are that the MacFries that you eat would have come from a Shepody potato that began its life in a field in the Lahaul-Spiti valley in Himachal Pradesh. This year, 70 per cent of the MacFries served by McDonald’s India would have been grown in India. By 2010, each and every MacFry would be Indian, and Indian fries may well be travelling the world.

The process of growing the potato that becomes a serving of fries is a logistical masterpiece. The master crop of potatoes is grown in the Himalayas, where the weather is conducive, but these don’t make it onto the plate. Instead, they’re harvested in September and rushed, before the Rohtang Pass shuts for the winter, 1,000 kilometres to farmers in Kheda district west of Ahmedabad in Gujarat, where the tubers are replanted. Come March, the now massive Shepody potatoes are harvested and sent to the McCain factory in Mehsana to become MacFries.

Sounds difficult, and it almost didn’t happen. It took nine years for McCain to get the potato right, no less because of McDonald’s exacting standards. Devendra Kumar, General Manager, Agriculture, McCain Foods India, is the reason that India became only the 14th country in the world to produce MacFries. Not a mean feat when you consider that McDonald’s is the world’s largest consumer of potato fries and serves them in over 200 countries worldwide. “There are 2,000 potato varieties in the world, but only a very few meet McDonald’s exacting standards. One of them is Shepody, but India has the worst possible growing condition for Shepody,” says Kumar. 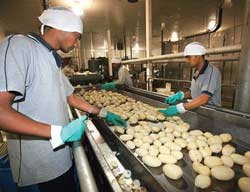 They are steam-peeled, cleaned and checked
The challenge before Kumar wasn’t convincing farmers to grow potatoes—India is the world’s thirdlargest producer of potatoes and in 2008 grew an estimated 35 million tonnes of potatoes. The problem was convincing them to grow the potato he wanted. “Indian varieties tend to be low on solids and very high on water, the opposite of what a good French fry potato should be,” Kumar says. Abhijit Upadhye, Director, National Supply Chain, McDonald’s India, says that fries created from local varieties were “limp, charred and far too oily.” Richard Tarn, the Canadian creator of the Shepody variety, believed that it could never be grown in India, particularly since the variety suffers from “heat stress”. The Shepody, with its high solid content and an oblong shape, is perfect for fries. But Kumar spent years trying to get the potato to grow. The growth and potential of the fast food industry in India made potato processing almost an imperative.

The Shepody variety could be produced in the high hills of Himachal Pradesh. But that would be a logistical nightmare for McDonald’s, which has stores all across the country. Eventually Kumar settled on Gujarat. “The Gujarati conditions, while not perfect, were good, and the Gujarati farmer was willing to try new practices if it meant making more money.”

Kumar started with a small demo farm of his own, showing farmers techniques of drip irrigation, which reduced water usage by half. This was important in a state where the water table is now below 700 feet and also for the low water containing Shepody. “Drip irrigation also dramatically enhanced the amount of land under cultivation as farmers didn’t need furrows for flood irrigation. We also taught them things like pre-chitting, cutseed and other systemic changes.” The Gujarat government also had a special scheme for drip irrigation which gave farmers a 50 per cent subsidy, but even then it costs over Rs 50,000 an acre to install. Kumar’s Shepody began to give hugely improved yields. From a maximum of 10 tonnes per acre initially, farmers could potentially grow 16 tonnes of Shepody per acre. With a fixed-price contract with McCain in place, the farmers were also protected from price fluctuations. From just seven acres under cultivation by one farmer, Kanhaiyalal, in 2005, today 1,500 acres are under Shepody cultivation and farmers are lining up at McCain’s factory (McCain Foods was set up in 2006 at Mehsana at a cost of Rs 109 crore) to join the potato revolution. Ready for packaging, fries are measured-cut into bags
Inside the Mehsana factory, it takes 100 minutes from the time the potato sack is opened at one end to the time the finished fries make it out the other end. And the process is quite amazing for the high degree of mechanisation as well as the sheer size of some of the Shepody potatoes— over one foot long! “People sometimes think that the super long fries they get are ‘formed’ in a machine. These are from a potato,” jokes Upadhye.

In the Quality Assurance room, we see testers who have to taste a batch of fries every half hour. “Not a bad job,” jokes one. But Kumar’s success has been so thorough that McCain India is now producing not just MacFries but a whole host of products and now Gujarati potatoes are travelling to the ends of the earth. They will process 15,000 tonnes of potatoes this year. The plant has a capacity to process 40,000 tonnes of potatoes into 20,000 tonnes of fries, enough to make sure Upadhye does not have a problem with fries for quite a while. And when you walk into McDonald’s, you have an Indian fry!