Why India's fears of globalisation are exaggerated

Few countries have more to gain from a greater integration with the rest of the world. Indeed, many fears about it within India seem exaggerated.

Pankaj Ghemawat and Steven A. Altman
ABOUT: Pankaj Ghemawat and Steven A. Altman are specialists on globalisation. Ghemawat, author of World 3.0, is the Anselmo Rubiralta Professor of Global Strategy at IESE Business School and Global Professor of Management and Strategy at the Stern School of Business at New York University. Altman is a Senior Research Scholar at Stern and Executive Director of its Center for the Globalization of Education and Management, where Ghemawat is a director.

A majority of Indians believe that growing trade ties and business links with other countries are good for India, and Prime Minister Narendra Modi has sought to boost them through diplomatic channels. Indeed, several programmes, such as the "Make in India" initiative, are intended to have this impact. But Indians and the Indian government are not unequivocally pro-globalisation. Nearly four out of five Indians believe that "our way of life needs to be protected against foreign influence," according to Washington-based think tank Pew Research Center's Global Attitudes Project. And, remember, India nearly blocked the World Trade Organization's Bali Package.

While globalisation evokes strong opinions, facts are often in short supply. It would be a folly to advocate more (or less) globalisation without a clear understanding of how globalised India really is today. We answer that question here based on the results of our DHL Global Connectedness Index 2014, which measures the globalisation levels of 140 countries. It factors in hard data related to trade, capital, information, and people flows.

The simplest way to assess a country's globalisation is to look at activities that could take place either domestically or internationally and see what proportion are international. On this type of measure, which we call depth, India ranks as one of the world's least globalised countries, only 126th out of 140.

Before readers become too alarmed, we should mention upfront that large countries naturally tend to be relatively less international, with more of their activities taking place in their expansive domestic markets. However, some alarm is indeed called for because even after accounting for characteristics such as India's large size, its international flows are still smaller than statistical (regression) models predict they should be. And while those who favour less globalisation might find that encouraging, we do not because the depth of countries' international interactions correlates with their growth rates and other measures of prosperity. 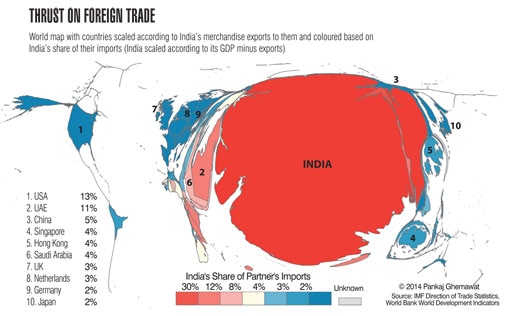 Thrust on foreign trade
Click here to Enlarge
To elaborate just how small India's international interactions are, start with a sampling of indicators of the globalisation of Indian business. The participation of foreign multinationals in the Indian economy via foreign direct investment (FDI) has been a matter of great controversy, but only five per cent of India's fixed investment (gross fixed capital formation) was financed by FDI over the past three years, and only 15 per cent of countries rank lower on that metric. Prime Minister Modi expects exports to boost growth but merchandise exports accounted for only 17 per cent of GDP in 2013, ranking India 111th out of 140 countries. The map that accompanies this article drives this point home by sizing India based on its GDP minus its exports and all other countries in proportion to India's merchandise exports to them. India, unsurprisingly, does do better on services exports. Valued at eight per cent of GDP, India's services exports depth ranks 64th out of 140 countries.

Shifting from business to culture, given Indians' fears about foreign cultural influences, it is striking that no other country ranks lower on the depth of its international people flows. Immigrants comprise less than 0.5 per cent of the population (as compared to three per cent globally), and only about one per cent of people born in India live abroad. Averaging across the whole population, Indians travel abroad once every 83 years, compared to a global average of once every six years and once every 13 across emerging economies. Only four countries receive fewer tourists per capita. Furthermore, India ranks in the bottom 10 per cent of countries on both the proportion of its university-level students enrolled abroad (less than one per cent) and the share of foreign students at Indian universities (about 0.1 per cent). Worldwide, roughly two per cent of all university students are enrolled outside of their home countries.

Some alarm is indeed called for because even after accounting for characteristics such as India's large size, its international flows are still smaller than statistical models predict they should be.

Where India ranks near the top on our index is on the global "breadth" of its international interactions. While small, they are among the world's most globally distributed, ranking 22nd out of 140 countries. Something to celebrate? Not quite, because digging deeper into the numbers reveals that India's high breadth reflects the small proportion of its international interactions involving other countries in South and Central Asia.

How little of India's international interactions take place within its region? Only seven per cent of its merchandise exports and 1 per cent of its merchandise imports do, even though more than half of the world's merchandise trade takes place within roughly continent-sized regions. Similarly the proportion of India's FDI flows involving neighbouring countries is negligible. Somewhat more of India's outbound phone calls are intra-regional - 27 per cent - but again that proportion is far short of the global average (again more than half). The only real exception to this pattern is immigration into India, with 97 per cent of immigrants hailing from within South and Central Asia.

There are, of course, obvious reasons for India's limited intra-regional integration, starting with its relationship with its largest regional neighbour, Pakistan. Why worry about low intra-regional integration? Because there are efficiencies that come with strong ties to proximate and similar countries. Without these, India's trade, capital, information, and people flows are depressed because of the higher costs associated with the unusually long distances they traverse.

As one of the countries with the smallest international flows relative to its size, few countries have more to gain from globalisation than India. Capturing that potential will require overcoming India's fears about opening up. Given the limited extent of India's globalisation today, many fears about it within the country seem exaggerated. A proper understanding of the magnitude of global flows reveals that many problems that are blamed on outside forces really have domestic root causes and require domestic solutions.

India's macro-level weakness on globalisation indicators also implies large micro-level untapped potential for the country's firms to do more business overseas. The limited extent of globalisation everywhere, however, underscores the challenges involved. To achieve their global potential, Indian firms will have to boost capabilities to operate across the cultural, administrative/political, geographic, and economic ("CAGE") distances that separate India from other countries.

Many Indian firms targeting growth abroad may need to become more diverse internally and internally and at the top. Across the Fortune Global 500, the world's largest firms by revenue, 15 per cent of top management team members hail from outside their firm's home country. Yet, only two per cent of top management team members in India's Fortune Global 500 firms are from outside India, according to a study by Pankaj Ghemawat and Herman Vantrappen, Managing Director of Akordeon, a strategic advisory firm based in Brussels. A lack of diversity at the top not only slows a firm's learning about foreign markets but also sends problematic signals to high-potential foreign recruits about their career prospects.

Globalisation will remain controversial, and your view of the right path forward for India may differ from ours. At the minimum, by producing the DHL Global Connectedness Index (which is available for free download at www.dhl.com/gci), we aim to strengthen the globalisation debate by tracking the relevant data to make it a well-informed one. In the words of the late Daniel Patrick Moynihan: "Everyone is entitled to his own opinion, but not to his own facts."