Despite the rumours, Indian banks are unlikely to suffer much in this shakedown, thanks to ruthless regulations, says R. Sree Ram.

>How to get out of the squeeze
>Weapons of mass destruction
>ICICI: Victim of perception
>10 commandments
>10 blue chips you can now afford
>Is it time to buy?
>Still a lot of sheen left
>Insuring a safety net
>When in doubt...
>No one is panicking 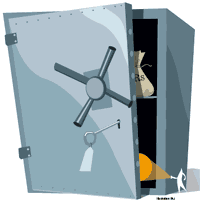 A wise man, it is said, learns from his mistakes. By this measure, Ramakrishna, all of 29, is a very wise man. When rumours about the state of ICICI Bank’s fiscal health began doing the rounds, he was one of the very few who did not panic and move to close his account. “Even if the bank fails, it is the investors who will pay for it, not customers,” he says. Ramakrishna has been through the fire and knows what he’s talking about. He had an account with Global Trust Bank when the Reserve Bank of India (RBI) imposed its moratorium in 2004. The bank was subsequently merged with the Oriental Bank of Commerce—and none of its depositors lost their money.

The Indian banking system seems strong enough to emerge from the current crisis unscathed. Of course, rumours will abound, but if more depositors were like Ramakrishna, there would be far less panic. Because, as experts say, there’s no reason to worry. No Indian bank has a substantial exposure to the toxic assets of investment banks either in the US or in Europe.

Even the largest private sector bank, ICICI Bank, through its UK subsidiary, has an investment of only around $80 million in Lehman Brothers’ bonds. This is less than 0.1% of the consolidated total assets of the ICICI Group. In fact, with a capital adequacy ratio of around 13%, ICICI’s financial position is comfortable.

“Indian banks do not have any direct exposure to sub-prime mortgages. The banking sector, through its overseas branches, has some exposure to distressed financial instruments and troubled financial institutions. But this exposure is part of the normal course of their business and is quite small relative to the size of their overall business. Our banking system is stable and sound. There is no reason for any anxiety,” RBI Governor Dr Duvvuri Subbarao said in a statement.

This apart, all scheduled commercial banks are closely regulated by RBI, which imposes strict regulatory checks against lending and reserve requirements. To start with, deposits up to Rs l lakh are insured by an arm of RBI—the Deposit Insurance and Credit Guarantee Corporation.

Banks are also required to invest at least 25% of their net deposits in government securities and other similar sovereign instruments. This is commonly referred to as SLR (statutory liquidity ratio). Another 9% of the total deposits of every bank must be kept with the RBI as cash reserve. So, effectively, 34% of the total deposits of all Indian banks are invested in government guaranteed securities.

Apart from these safety measures, Indian banks also need to maintain mandated capital, also known as the capital adequacy ratio (CAR). Against a global benchmark of 8%, the central bank has stipulated 9% capital adequacy for Indian banks. On their part, most banks maintain a CAR of around 13% (see table). “Even though 10% of the assets turn bad and are non-recoverable, banks would have sufficient liquidity from the recoverable sources to pay back the depositors. It is only when the defaults rise beyond the capital adequacy ratio that the problem will arise, which is very unlikely,” says Arun Khurana, fund manager, UTI Asset Management Company.

“We won’t find such a liquidity cushion in any other banking system. This protects banks from asset liability mismatches and equips them to meet sudden demands for funds from customers,” adds K. Unnikrishnan, deputy chief executive, Indian Banks Association. It also protects banks from difficulties due to sudden interest rate hikes and changes in market liquidity.

The only risk for the banking industry is from bad debts— non-performing assets (NPAs). Even in this case, the Indian banking sector is sitting pretty. According to research by IDFC SSKI, the asset quality of scheduled commercial banks improved with NPAs falling from 1.9% in 2002-3 to 0.58% in 2006-7.

At the basis of the banking system is trust; it is trust that generates business for the bank. If depositors and investors lose trust in a bank, there’s no way it can pay them all back at once. That’s why the government and the RBI were quick to pre-empt the rumours about just one bank. “Banking is not based on capital adequacy ratio. It is based on trust—the way they conduct business and the way they employ risk mechanisms,” says Khurana.

The depositors obviously have little cause for fear. But what about the investors, those who have bought bank stocks? The shares of Indian banks have been beaten down alongside those of other sectors. However, comparing the performance of the BSE Bankex—the benchmark capturing share-price movement of major Indian banks—with the Sensex, over the past three months and the past 12 months (YTD), reveals an interesting picture. While the Bankex has fallen by 1% since 10 July 2008, the Sensex has lost almost 16% during the same period. Similarly, while the Bankex lost around 36% during the 12 months ending 13 October 2008, the Sensex lost close to 39%.

One reason for the relative outperformance of banking stocks is that when the financial crisis broke out, monetary controls were loosened. This meant that banks had more money to lend, which would eventually increase their interest income. Banking stocks such as Union Bank, Bank of Baroda, State Bank of India and Punjab National Bank outperformed the market. “A major contributor to this outperformance is the insulation from global crisis. Also responsible is the strong and resilient domestic banking environment. So while the share prices of individual banks remained volatile, the sector outperformed the broader market,” says Krish Shanbhag, head of research, Antique Stock Broking.

Should you invest now? Analysts say that a short-term outlook might not necessarily yield good returns, but a long-term investor is likely to benefit. Even if the Indian economy sustains the current growth rate or moderates to 7%, experts expect the banking industry to grow at a healthy pace and banks to post robust profits. “You have to be a patient investor to gain from the banking sector,” says Khurana.