We ranked best Indian CEOs based on the shareholder returns they generated during their tenure.

Our colleague Nana von Bernuth worked with us to create and analyse this ranking. We selected the CEOs from the S&P CNX 500; we included CEOs from companies that had been in this index for at least four consecutive years.

To make sure we had reliable, and sufficient, data, we excluded CEOs who had assumed their role before 1995 or after June 2009. Thus, some well-known CEOs were excluded, such as N.R. Narayana Murthy (Infosys), Azim Premji (Wipro) and Deepak Parekh (HDFC).

The median age at which these executives had become CEO was 54, and those still in office had an average tenure of 6.7 years. Only 1.3 per cent were women, and 91 per cent of the CEOs were Indian nationals. 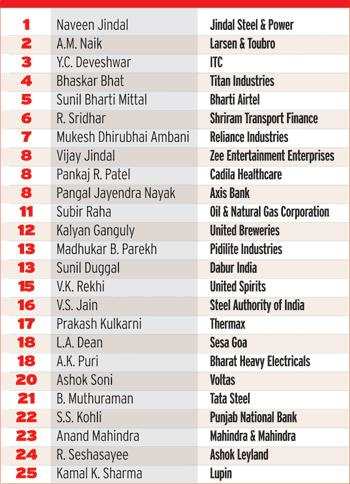 How we ranked them: Click to find out
Click here to Enlarge
We ranked these CEOs based on the shareholder returns they generated during their tenure. Our ranking combines three measures: country-adjusted return, industry-adjusted return, and change in market capitalisation during tenure. Of course, shareholder return is not the only measure of performance and it omits contributions companies make to a wide group of stakeholders. But it is the fundamental scorecard for CEOs of public companies. And it is the same scorecard for everyone.

Metrics:
We pulled financial data from Datastream and Worldscope and calculated daily company returns for the entire length of each CEO's tenure, from the first day to the last day (or until June 30, 2011, if the CEO was still in office). We used three metrics:

Country-adjusted company returns:
We computed a company's total shareholder return (TSR, including dividends reinvested) for the CEO's tenure. We then computed the average return that other prominent Indian firms had over the same period and subtracted that figure from the company's return. This measure thus excludes any increase in stock return that was merely attributable to an increase in the general stock market.

Industry-adjusted company returns:
We took the company's total shareholder return during the CEOs' tenure and deducted the average return for the company's industry during this time, to exclude any increases in returns that were the result of rising fortunes for the overall industry sector globally.

Market capitalisation change:
We measured the change in the company's equity market capitalisation over the CEO's tenure and adjusted this measure for inflation. We added to this figure the inflation-adjusted value of the dividends and shares repurchased, and subtracted the adjusted value of shares issued. We then ranked all CEOs for each metric - from one (best) to 374 - and took the average of these three rankings to arrive at the final ranking. Using three metrics is a balanced approach; while the first two metrics risk being skewed towards smaller companies (it is easier to get large returns if you start from a small base), the third metric is skewed towards larger companies.
Published on: Jan 18, 2012, 12:00 AM IST
Posted by: Navneeta N, Jan 18, 2012, 12:00 AM IST