There are two ways to tame the oil monster: One is to become more energy efficient and the other is to develop new energy sources.

Last year, India imported 121.67 million tonnes (MT) of crude—9.1 per cent more than the year before, but guess what happened to the import bill? It ballooned disproportionately, some 40 per cent, to $68 billion. That’s a whole lot of money consumers could have either put away in their savings accounts or spent on consumption, helping the economy along in either case.

CNG is an environment friendly alternative to petrol, diesel
Worryingly enough, with global crude oil prices showing no signs of easing (Goldman Sachs analysts expect oil prices to touch $200 within two years, and Brent crude has already hit $139 per barrel at the end of the first week of June), the only hope is that slowing world economies will ease their demand for oil. At any rate, with the planet said to be running out of oil, the only viable long-term solution is to develop alternative sources of energy.

So, what are India’s options? According to experts such as Arvind Mahajan, Executive Director at KPMG India and The Energy and Resources Institute’s (TERI) senior fellow, Praveen K. Agarwal, the options are the same as elsewhere in the world—solar, wind, biofuels, hydel and nuclear— except that certain natural geographical advantages of India and its unique situation as a large developing country make certain energy sources more compelling. Take solar energy, for instance. “The sun shines bright for more than 300 days in most parts of India, and that is an option we must look at,” urges Mahajan.

A recent McKinsey report, Powering India—The Road to 2017, too, argues on similar lines. It highlights that India’s annual solar energy yield, at 1,700-1,900 kWh (kilowatt-hour), is among the highest in the world. 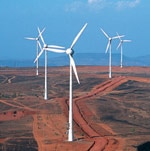 A cheap but difficult resource to tap
The irony, however, is that India is set to be only a marginal player accounting, at present, for only 1-2 GW (giga Watt) of the total 90 GW of global solar capacity likely to come on stream by 2015. “Since the cost of solar power can drop to Rs 8-10 per kWh by 2012, it could be a viable source of peaking power. India should reduce the cost of solar power through large-scale development and deployment of solar technology,” the report recommends.On its part, the government is pushing solar products in the market through a slew of incentives and awareness programmes. “Banks are giving loans to households at 2 per cent, to non-profit organisations at 3 per cent and to industries at 5 per cent interest rates to buy solar water heaters,” says N.P. Singh, Advisor in the Ministry of New and Renewable Energy. “Every consumer should know this: A solar water heater with a capacity of 100 litres per day saves 1,500 units of electricity per annum.”

Since homes and offices consume one fourth of the total electricity supply, power utilities in states such as Karnataka, Andhra Pradesh and Orissa offer sops to reduce consumption and, thus, losses. Karnataka’s electricity supply companies, for instance, provide a rebate of 35 paise per unit for consumption of up to 100 units. The initiative has worked. Bangalore has the highest number of solar consumers in the country, although there are other cities such as Pune where private enterprise is conducting interesting experiments with solar power (see Solar township below).

A lot of wind?

With an installed capacity of 8,757 MW in 2007-08, India is already the fourth-largest player in wind energy. The government estimates wind energy potential at 45,000 MW per annum, although at present wind power generation is a relatively modest 8,757 MW per annum— that is, 6 per cent of installed capacity. The problem with wind power is, of course, simple. One needs winds through the year for the turbines to run and generate power. In India, the best locations for wind farms are in Tamil Nadu, Andhra Pradesh, Gujarat, Karnataka and Maharshtra. 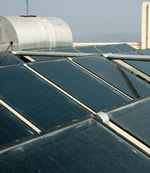 India is yet to capitalise on solar power
Limited locational choices mean that wind power can never be a major source of electric energy in the country. More worryingly, wind power capacity addition is slowing down in India, even as China surges ahead. Installations in India in 2007 were down to 1,580 MW from 1,730 MW the year before. The reason for this is lack of consistency in policy among states, says U.B. Reddy, Senior GM with Enercon India, a major player in wind energy.

Projects, he says, could successfully come up in Gujarat, while there are hurdles in other places. Harnessing wind power is tough in other parts of the world, too. According to India Wind Energy Association (IWEA), 20 of the 40 wind energy markets reported fewer installations in 2007 than in 2006. Nuclear energy is another option, but India doesn’t have sufficient fuel supplies; besides, people remain wary of this technology for safety reasons. However, KPMG’s Mahajan says: “Nuclear energy is a solution from a long-term perspective. The Prime Minister should push through the nuclear deal with the US.” But, not even the best-case scenario for nuclear energy puts generation at more than 20,000 MW by 2020. The McKinsey report says that biomass could be another option. Some estimates put its potential at 50-70 GW, which could make it the renewable resource with the highest energy generation potential, since its utilisation will be higher than solar and wind. One fundamental issue with biomass is that it is not available.

Where available, it’s used as organic fertiliser. Namdhari Seeds, for example, uses organic waste to produce high-quality vegetables that command a premium in the market. According to KPMG, hydel power is an alternative, too, and it suggests that India exploit its hydro potential of 150,000 MW from the current 35,908 MW. Zero fuel costs coupled with highest returns make hydel an attractive choice for every investor, but environmental concerns and rehabilitation and resettlement issues are holding up large hydel projects.

That leaves natural gas. There are several reasons why India should boost consumption of natural gas. First of all, with only one carbon and four hydrogen atoms per molecule, natural gas has the lowest carbon-to-hydrogen ratio and, hence, it burns completely, making it the cleanest of fossil fuels. TERI’s Agarwal points out another reason why gas should be a fuel of choice. The concentration of oil in West Asia, he points out, has given countries in the region an upper hand in dictating prices. However, in the case of natural gas, there is no such geographic concentration; it is abundantly available across the world. The US is estimated to have 600 billion cubic feet (BCF) of natural gas, and India’s proven reserves are 1.08 trillion cubic metres or 0.6 per cent of the world’s reserves. Currently, India produces 82 million metric standard cubic metre per day (MMSCMD), which meets only 76 per cent of demand.

The rest is met by imports. Some of the biggest consumers of natural gas are expected to be vehicles, industries (power, fertiliser and steel), and homes, where it will be used for cooking. Although, like petrol and diesel, natural gas is a fossil fuel and exhaustible, there’s sufficient supply available to keep prices from shooting up the way they have in the case of oil. However, distribution is a big issue (at least for retail consumers). In fact, that’s very evident in the limited number of compressed natural gas (CNG) outlets for vehicles; more consumers are unable to shift from oil to gas because there aren’t enough filling stations in the country. Yet, the auto industry in India is experimenting with hydrogen-laced CNG, or HCNG. The industry association, SIAM, and Indian Oil are piloting a trial run in Delhi. By 2020, the government wants 20 per cent of all vehicles to run on HCNG.

Meanwhile, electric vehicles— especially two-wheelers—are making a beginning, but given India’s pathetic power situation, they may not reach a sizeable number even in the next five to 10 years. Says Chetan Maini, Deputy Chairman, Reva Electric Car Company: “Transportation in India is growing upwards of 15 per cent a year as against 1-2 per cent in the US. It is critical now that we move into forms of energy that India already has as its national resources.”

Efficiency is the key

Whatever alternative plans India comes up with today, it will be a solution for the long haul. The near-term solution is to use energy more efficiently. And there’s plenty of scope on that count. For every unit of GDP, India consumes more energy than other developed countries such as the UK. In Japan, TERI’s Agarwal points out, energy consumption has stayed more or less flat over the last 10 years.

Indian Railways, the largest consumer of diesel, is using a blend of high-speed diesel and bio-fuel (made of jatropha seeds) in some regions on an experimental basis. However, the government’s approach to bio-fuel use is unclear. “Jatropha can only supplement other sources, and not be a solution by itself,” points out KPMG’s Mahajan.

Like the railways, other consumers have to do their bit. A KPMG report, quoting Planning Commission data, notes that India can save 351 million tonnes of oil equivalent (MTOE) or 19 per cent of its total requirement by 2032.

As much as 142 MTOE (7.5 per cent) can come from efficient energy use in industry, lighting, home appliances alone; 34 MTOE (1.8 per cent) can be achieved by increasing the share of the railways to 50 per cent of freight transport from the present level of 32 per cent; 81 MTOE (4.3 per cent) from the use of mass transport and improved fuel efficiency in vehicles; and 111 MTOE (5.8 per cent) from increase in thermal power generation efficiency from 31 per cent at present to about 40 per cent. Consumers need to get this: all of us are like crack addicts and the peddlers—the oil producers— aren’t going to cut the prices unless we kick the habit.