Eno and Gas-O-Fast are among 15,000 products Akums Drugs & Pharmaceuticals makes for more than 200 clients, including drug giants such as Abbott Labs, Cipla, Novartis, Merck and Ranbaxy. It has emerged as one of the country's largest contract drug manufacturers in less than a decade.

Akums Co-founders Sandeep (left) and Sanjeev Jain <em>Photo: Vivan Mehra/www.indiatodayimages.com</em>
Manu Kaushik
About three years ago, Mankind Pharma approached a vendor to develop an antacid. The drug maker wanted a product that could compete with market leader Eno, a unique fizzy product sold in powder form by GlaxoSmithKline Consumer Healthcare. The vendor worked on the concept and came up with Gas-O-Fast, which Mankind Pharma launched in 2011. Soon thereafter, Glaxo approached the same vendor, Akums Drugs & Pharmaceuticals, to make Eno. "Maybe they were impressed with us or wanted all our capacities to be used for Eno to snuff out Gas-O-Fast, we do not know," says Akums co-founder D.C. Jain. Subsequently, Akums also started making Eno in liquid and tablet forms, a category which comprises more than half the market for antacids. Eno and Gas-O-Fast are among 15,000 products Akums makes for more than 200 clients that also include drug giants such as Abbott Labs, Cipla, Novartis, Merck and Ranbaxy. In fact, Akums has emerged as one of India's largest contract drug makers in less than a decade.

Akums's journey dates back to 1984, when Jain and his sons - Sanjeev and Sandeep - started a pharmaceutical trading business from a 55 sq. ft. shop in Delhi. The brothers were young, aged 18 and 16 at the time, but wanted to do something big. They would go to college in the morning and work at the shop thereafter. In the next 10 years, their business flourished and the Jains ventured out by setting up a drug factory at Bhiwadi in Rajasthan. By then, Jain had quit his job - he was company secretary at Dalmia Cement - and helped his sons in expanding the business. They began with their own brand of products but later got into contract manufacturing.

The turning point came in 2003, when the central government made Uttarakhand, Himachal Pradesh, and Jammu & Kashmir excise-free zones to boost industrial activity. The Jains recognised the opportunity. They set up Akums in December 2004 and started a plant at Haridwar in Uttarakhand. Later, they sold the Bhiwadi factory as it became financially unviable.

There has been no looking back since then. With an initial investment of Rs 4 crore - Rs 1 crore from the founders' pocket and the rest as debt - Akums has been profitable from its first year of operations. It runs six plants now in Uttarakhand, making medicines, injectables, eye drops, nutraceuticals and Ayurvedic products. Its gross turnover has surged at a compound annual growth rate of 67 per cent in the past eight years - to Rs 1,025.9 crore in 2012/13 from Rs 17 crore in 2004/05.

Younger sibling Sandeep says their expertise lies in innovation. "Akums is not a contract manufacturer. We certainly do more than that," he says. Akums, which employs about 5,000 people, has a team of 350 people in research and development that comes out with new products and improvements in existing ones, he adds. He also says that Akums has 59 patent applications related to processes and formulations pending with authorities.

Growth aside, Akums has also emerged winner in the category of corporate governanc . Jain senior says that the company has formed an audit committee and remuneration panel consisting of directors other than the founders. "The law does not mandate us to form an audit committee, but we still have one. The company takes its transparency and disclosure norms seriously because we are dealing with large MNCs who have strong emphasis on corporate governance and quality control," he says. 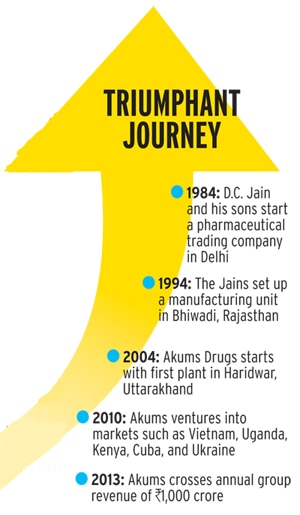 Customers vouch by Akums's claims. Jayesh Shah, Chief Financial Officer of Ahmedabad-based Intas Pharmaceuticals, says his company has been associated with Akums since the latter's inception. Shah says that, among the 80 vendors Intas works with, Akums has the best service levels and product quality. "We often face issues with other suppliers in terms of product availability or products failing quality tests. Akums's commitment level has been satisfactory," he says. Vinayak Hiremath, Deputy General Manager (outsourcing and marketing), Lupin, says Akums is its biggest supplier, accounting for roughly 35 per cent drugs it sources. "Akums's prices are extremely competitive," he says.

A big reason why Akums has managed to keep prices competitive is that it enjoys excise duty exemption at its factories. But next year, the benefits for Akums's first plant - set up in 2004 - will end, as the tax exemptions last for 10 years. The first unit contributes 61 per cent to its revenue. To make up for this, Akums has acquired two units in Uttarakhand that are exempt from excise duty payments until 2020. The combined size of these two units is bigger than the first factory. "As the benefits lapse, we have plans to shift some machinery to the newly acquired units," says senior Jain.

With an initial investment of Rs 4 crore, the company has been profi table from its fi rst year of operations. It aims to triple its revenue to Rs 3,000 crore by 2020 with a third coming from overseas sales

From 2015, the first unit will be used for exports. This factory will also be used to make drugs under price control and for some multinational clients who prefer not to shift production of their drugs to a new location. In addition, Akums has acquired more land around its existing factories for expansion. The company has also recently ventured into export markets and has ambitious plans to boost its revenue. By 2020, it aims to triple its revenue to Rs 3,000 crore with a third coming from overseas sales.

Analysts are cautious, though. "Contract manufacturing is a capital- intensive business. To achieve higher revenue, the company will have to invest heavily in building capacity," says an analyst with a foreign brokerage. The analyst says that many companies have invested in contract research and manufacturing services segment in the past few years. "Such companies have not been able to fully utilise their capacities due to a demand slowdown. Their balance sheets are loaded with debt, which is affecting their growth." Akums has zero long-term debt on its books. Its working capital debt stands at Rs 40 crore.

Meeting its targets may seem like a tall order but the Jains have a magic pill for what it takes to succeed. Akums says it will not need much investment to reach that revenue target. "Our current capacity utilisation is a low 42 per cent," says senior Jain. "We have invested keeping in mind the future demand from existing clients and exports market."