Developed markets together now contribute 48% to Lupin's revenue (the bulk, no doubt, coming from the US) and emerging markets another 19%, while the domestic market's share has shrunk to 26 per cent from 31 per cent five years ago.

'I want Lupin to become a $5 billion (Rs 32,500 crore) company by 2018. It is doable. About $4 billion should come from organic growth and the remaining from acquisitions,' says Vinita Gupta CEO, Lupin (Photo: Rachit Goswami)

Vinita Gupta works hard and expects her team to do the same. This year, the 47-year-old CEO of Lupin Ltd even cancelled the usual holiday on Diwali at its Baltimore, US, headquarters, making do with just a puja, a traditional Indian lunch, and a bit of fun and games. It is this dedication to her work that has enabled her to raise the company's US business, which she has been heading since 2005, from a mere five per cent of its revenue then to 45 per cent. Lupin, started by her father Desh Bandhu Gupta in 1968, retained its sixth rank this year (by prescriptions) in the annual list of 10 biggest and fastest-growing US pharma companies compiled by global healthcare industry tracker IMS Health - the only Asian company to figure in the list. Gupta has been CEO since September 2013.

Gupta's goal, however, is even higher. "I want Lupin to become a $5 billion (Rs 32,500 crore) company by 2018," she says. "It is doable. About $4 billion should come from organic growth and the remaining from acquisitions. We need to build upon the good work done so far for the next two years, apart from supplementing it with inorganic opportunities." Indeed, Lupin has been much in the news this year for its acquisitions, especially the takeover of US-based generics maker GAVIS Pharmaceuticals for $880 million in July this year, which gave the company its first manufacturing facility in the US. With 66 products awaiting approval and another 65 under development, most of them in niche dosage forms, GAVIS has immense potential.

GAVIS is the largest of Lupin's acquisitions, of which there have been 16 in the last few years, including three others between May and July - Medquimica Industria Farmaceutica in Brazil, Zao Bio Biocom in Russia and the specialty products portfolio of Temmler Pharma in Germany. Though many of these acquisitions are fairly small, they have created marketing front ends for Lupin across the globe. "Our focus now is to properly assimilate the recently acquired assets to leverage their potential," says a senior company executive.

2005: Lupin launches its generics prescriptions division in the US. Vinita Gupta heads the facility

Developed markets together now contribute 48 per cent to Lupin's revenue (the bulk, no doubt, coming from the US) and emerging markets another 19 per cent, while the domestic market's share has shrunk to 26 per cent from 31 per cent five years ago. "Apart from the US, many new markets are going to be crucial for Lupin in the future," says Gupta. "We expect to do much better in Europe, which we did not pay much attention to in the past and in Japan, our second biggest overseas market, where there has been some slackening of growth. We also expect major growth in markets such as Russia, South Africa, Philippines, Brazil and other South American countries."

The ambit of Lupin's products has also expanded over the years from mere generics to branded, specialty and complex generics. It has spent heavily on research and development, and in creating new facilities. R&D expenditure rose from Rs 530 crore in 2010/11 to Rs 1,118 crore in 2014/15, while capex went up from Rs 480 crore to Rs 758 crore in the same period. Of its 77 products being sold in the US, 31 are market leaders. "We are now a branded generics-focused company with a diversified portfolio of products, including many limited competition products," says Gupta. "We have the infrastructure in place to meet future demand."

The ambit of Lupin's products has expanded over the years from mere generics to branded, specialty and complex generics. It has spent heavily on research and development, and in creating new facilities.

Unlike a number of other leading Indian pharma companies, which have been pulled up by the US Food and Drugs Administration over product quality - and had exports to the US from some of their units suspended - Lupin has gone unscathed. "We have a vigilant quality maintenance team," she says. "Most of our facilities have gone through six audits successfully in the past year." 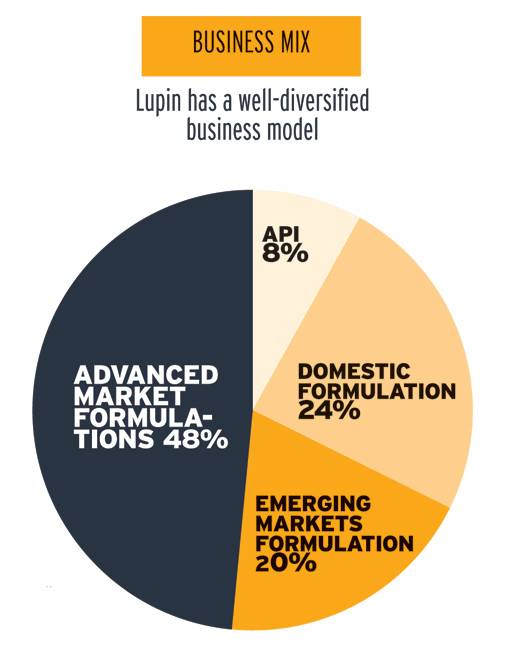 Encomiums for Gupta and Lupin pour in from those who have interacted with her, as well as pharma industry watchers. "She has a rare combination of courage, passion, good judgement and strong interpersonal skills," says Yvonne Greenstreet, former Senior Vice President and Head of Medicine Development at Pfizer. Bill Pasmore, Professor of Practice at Teachers College, Columbia University, is just as impressed. "Gupta combines sophisticated strategic thinking and hard-driving business focus with a very personable style," he says. "People who work for her love her. Her energy and persona are driving Lupin's global growth." Closer home, IDFC Securities Analyst Anubhav Agarwal testifies to Lupin's potential. "Strong R&D and regulatory capabilities, along with an aggressive and competent management team provide confidence about Lupin's ability as a complex generics-focused player and eventually a global specialty player," he says.

The current financial year, however, is proving a challenge, with growth less turbo-charged than before, primarily due to a slowdown across the US, Japan and domestic markets. "Product approvals in the US have slowed and there is margin pressure due to some consolidation of wholesale traders," says Gupta. "But the situation is improving and we hope to be back on track by the last quarter of this year."

Broking firm Emkay predicts that Lupin could grow organically to about $4 billion by 2018. "The reasons are lack of high value US product approvals, continuing weakness of the Japan business and a slowdown in the domestic anti-infective business," say Emkay analysts Jatin Kotian and Gaurav Tinani. IDFC's Agarwal echoes their reservations. "There are challenges to Lupin's growth in the near-term, given the sharp erosion in its US business, delays in key abbreviated new drug approvals and likely squeeze in its return ratios after the GAVIS acquisition," he adds.

Still, Lupin has 160 filings pending approval in the US, so once these come through, it could bound forward, point out Barclays analysts Balaji Prasad and Rohit Goel. Citi's analysts Prashant Nair and Bansi Vora also cite reasons why Lupin's chances of overcoming the current dull phase are high. "Pick-up in the pace of US approvals, a 200 per cent price hike in the price of one of its formulations, gFortamet, which will start reflecting from the fourth quarter, new, interesting product launches like gNexium and gGlumetza and the closure of the GAVIS deal (will all help)," they say.

"In coming years, our focus will be on high growth in new geographies and greater technological capabilities, augmenting our respiratory portfolio, complex injectables and biosimilars," says Gupta.