The partnership with UPS enabled Toshiba to drastically speed up its laptop repair service and benefitted both companies.

In the face of increasing competition from the likes of Dell, Hewlett-Packard and IBM, industrial giant Toshiba lost significant share in the US laptop market and fell to the fifth spot by late 2004.

Toshiba realised that for it to regain lost ground, one vital element it would have to provide was quicker repair service - a key criterion for laptop customers while making a purchase. Such customers are typically highly reliant on their laptops and cannot afford downtime. On analysing its entire supply chain, Toshiba realised that the challenge of notebook repairs was more about logistics than technical.

This made the company take a fresh look at its repair process and come up with a unique solution: it would expand the scope of its relationship with logistics firm UPS to significantly improve warranty service levels by drastically reducing the time taken for laptop repair.
TODAY'S CONNECTION
UPS continues on a strong wicket with an eight per cent expansion of revenues in the latest quarter. Toshiba is back to the No. 5 spot in the US laptop market
As part of the new arrangement, UPS's traditional role in shipping and handling of Toshiba's 'for-service' laptops was expanded to include the entire laptop repair operation. While partnering with a logistics firm is probably not the most obvious of choices for providing machine repairs, the owners of Toshiba notebooks would benefit greatly from having the choice of dropping off their laptops at any one of 3,300 UPS stores around the US. The laptop would then make its way to a UPS Supply Chain Solutions facility in Louisville, Kentucky, for servicing as required. Because the parts are in-house now, UPS can fix the laptop and ship the product the same day - speeding up a process that took 14 to 21 days to four days or less.


The new service model was enabled by a number of initiatives by both companies: UPS dedicated a 10,000 sq. ft. space at its Louisville facility for repair of Toshiba laptops, and hired a team of technicians with eight to 10 years of experience in notebook repairs. The technicians were then trained and certified by Toshiba. The facility itself is located adjacent to the UPS world air hub, and thus facilitates faster procurement of critical parts from Toshiba in Japan Toshiba can also use UPS's sophisticated transaction collating system that provides data about what parts are being replaced most often and can be improved on by the company for the next generation of its laptop models. 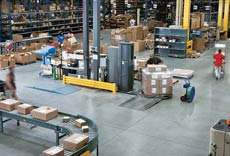 The UPS Supply Chain Solutions facility in Louisville
The arrangement has had a tremendous impact on Toshiba's service levels - turnaround times for laptop repair have reduced by over 50 per cent from an average of eight to 10 days to just two to four days under the new system. The partnership with UPS has played a key role as well in helping the company win back market share: by 2010, Toshiba had become the fourth largest player in the US laptop market with a 10 per cent share.

Besides the direct impact in terms of customer satisfaction and market share, the agreement has also yielded other benefits for both companies; UPS's sophisticated system for tracking transactions provides data on what parts are causing the most problems with Toshiba's laptops, enabling Toshiba to modify future hardware design to improve performance and minimise downtime. Toshiba also reaps the added benefit of smaller staff requirements for servicing. For its partner, UPS, the agreement has helped create a new revenue stream, and a means to differentiate its service offering and lock in valuable customers.
Published on: Nov 22, 2011, 12:00 AM IST
Posted by: Surajit Dasgupta, Nov 22, 2011, 12:00 AM IST